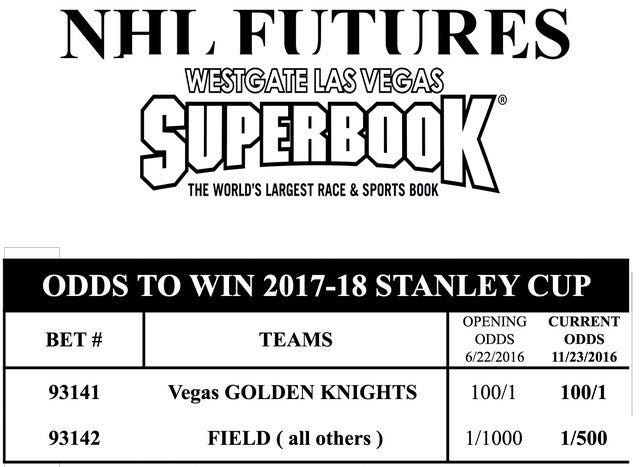 It was a tough day in Vegas for William Hill yesterday:

I will not spend much time feeling bad for the house here. For every bad day they have, us betters have six bad ones. The winners from the most recent public bashing will give back their winnings, plus more, over the next few weeks. A broken clock is right twice a day. You have to give the public something here and there, right? A little treat on Memorial Day is nice.

According to The Action Network, 53% of the bets last night were on the Golden Knights, while 63% of the bets and 64% of the money was on the Warriors. On top of that, MLB public darlings Washington Nationals, Cleveland Indians, Boston Red Sox, Houston Astros, Arizona Diamondbacks, and Colorado Rockies all received 70% of the public money and won. That is the perfect formula for a bad day for sportsbooks everywhere.

The Golden Knights have been an awesome story for everyone from Vegas, except those who own and/or work for sportsbooks.

Fox 2-If the Vegas Golden Knights win four more games this season and thereby hoist Lord Stanley’s Cup, then sportsbooks in Nevada will suffer the biggest futures loss – not overall loss - in the history of the Silver State, according to Covers.com. ...... “This will be the biggest collective loss, futures-wise,” said Johnny Avello, executive director of race and sports at Wynn Las Vegas and a 33-year veteran of the sportsbook industry in Nevada. “It’s a good, solid six-figure loser at Wynn, and my best guess for the state of Nevada is $5 million. Remember, this team was anywhere from 200/1 to 500/1, and it’s a local team. “Plus people wanted to get a souvenir ticket. They probably never thought they were gonna cash it.”

In other news, the Warriors are MASSIVE favorites against the Cavs heading into the finals: