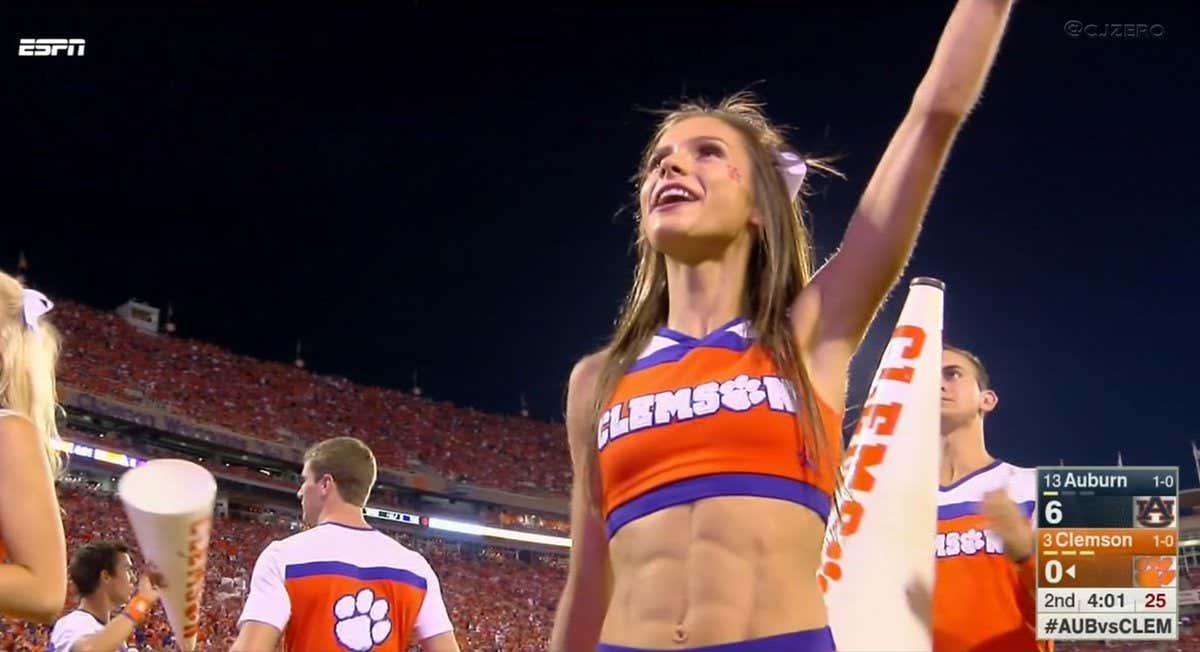 Tomorrow will mark the end of June, so with that, I think it’s an appropriate time to check in on the college football futures market.

We are 57 days until the first FBS game and a full preview with a look at win totals, conference championship/national championship odds, and Heisman predictions will come starting in mid-July. A lot can happen from now until late August, so making exact predictions in June is tough, but let’s look if there are any potential futures you can get down on now.

What do you want out of a futures bet?

Futures bets are one of the most profitable, but difficult bets on the board. It takes discipline and great planning. If you were to condense what you want from a futures bet into one word it would be VALUE. Often times, we mistake a national championship bet as one that can only be made if you think the team is going to win it all. Think about all of the steps that need to occur for a team to become national champions. When you have the leverage of a 20/1 bet, there will be more than enough opportunities to hedge it. Sure, you won’t get the exact 20/1 payout, but if timed correctly, you can make 5x-10x your investment. You can find an example of a properly hedged bet at the bottom of this blog. 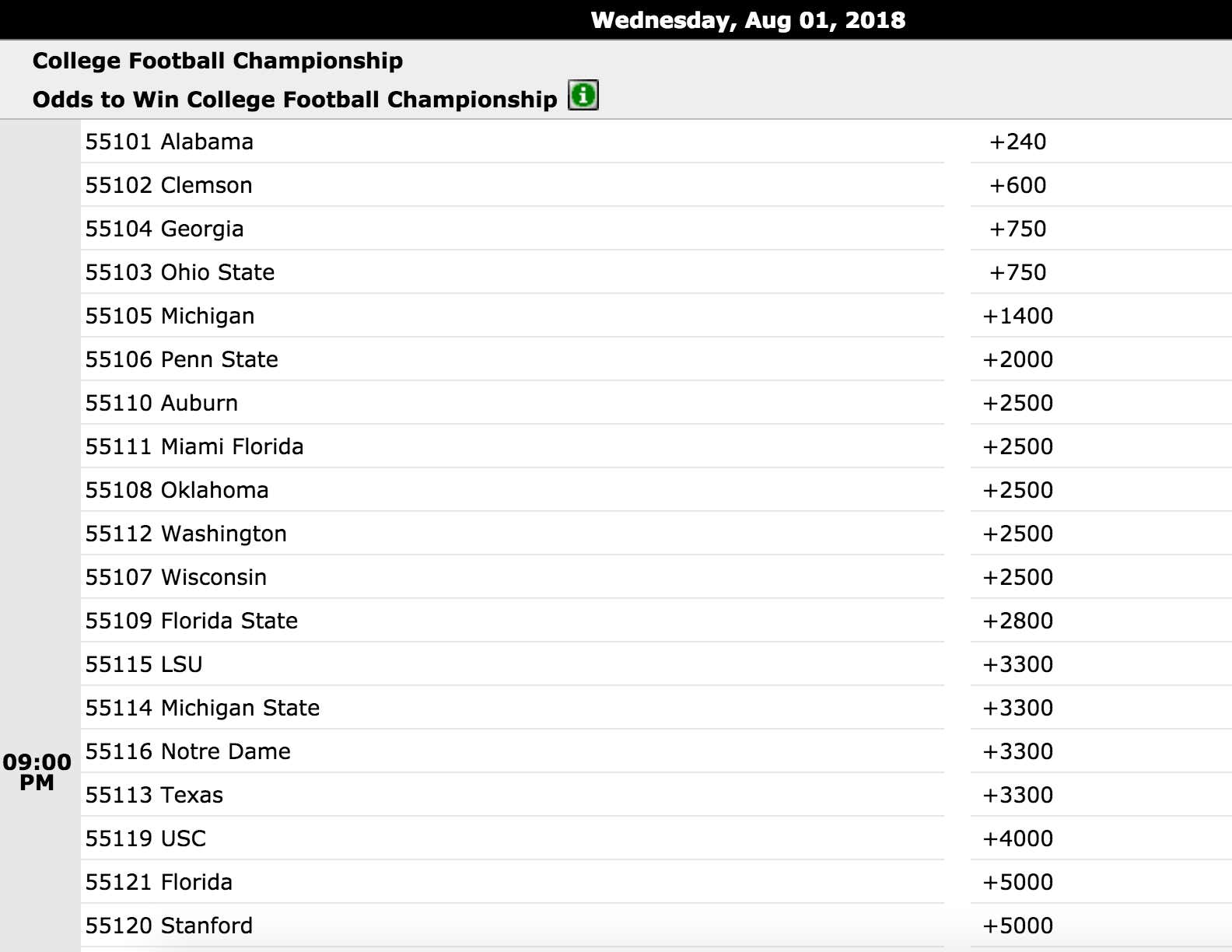 Alabama +240: There is no value here. Alabama will be in the national championship picture without a doubt. They return two of the best QBs in the country, a lethal running game, an elite defensive line, and the best coach in the country. However, their returning production ranks 103rd in the country. My biggest concern is their secondary, which will be completely rebuilt in 2018. That won’t be that big of a problem because Alabama will replace a bunch of 5-star athletes with another batch of 5-star athletes. +240 is just not enticing.

Clemson +600: I love Clemson this year and I love this play. Here are a few of the reasons:

-Clemson ranks 28th in returning production, 2nd among ACC schools (only behind Duke).

-That includes Christian Wilkins, Clelin Ferrell, Dexter Lawrence on the defensive line. All three of those guys could be picked in the first round of the 2019 NFL draft. Good luck blocking them.

-Their schedule is relatively easy. Texas A&M in College Station will be a test week 2, but I don’t see them blowing that. Their next toughest game is at Florida State on Halloween weekend. FSU will be much better than last year, but it’s going to take awhile for Taggart to clean up the mess Jimbo left him. South Carolina the Saturday after Thanksgiving will be tough, but that’s at home. Sure, they could have a Syracuse/Pittsburgh like slip up, but I don’t see it. They will most likely be 12-0 going into the ACC Championship game. From there you are playing with house money.

-Trevor Lawrence. We will spend a lot more time on this 5-star Freshman QB in the upcoming months, but please remember this kids name. Clemson’s main problem last year was the lack of production from the QB position with Kelly Bryant. Lawrence is Deshaun Watson 2.0 and will fix that for the Tigers. He can throw the ball 100 yards and athletic enough to run it another 100.

Plus he is the reincarnation of Sunshine from Remember The Titans: 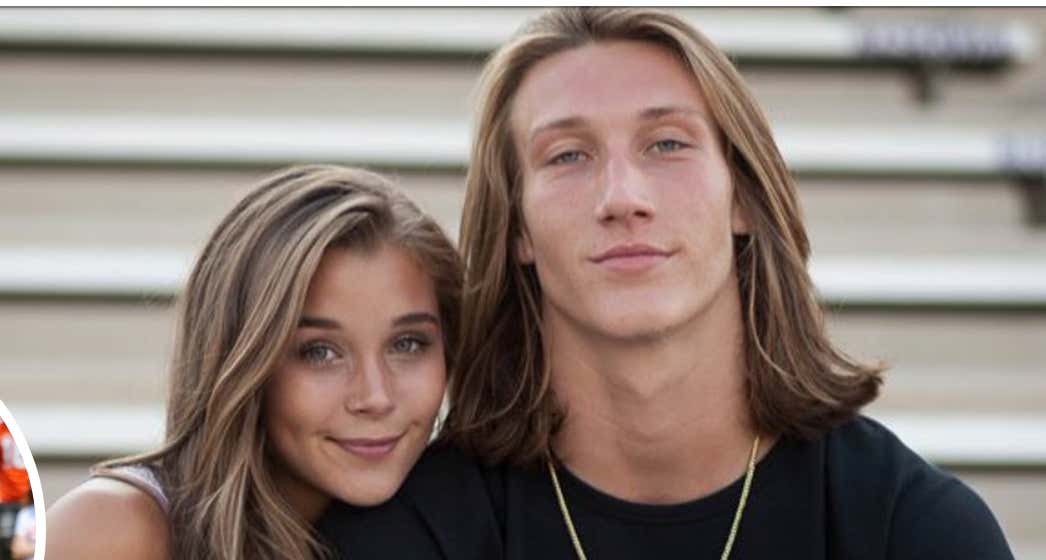 I’d book this bet now if I were you.

Michigan 14/1: I like Michigan a lot this year. Unfortunately, there is too much of a premium on them because of their name.

Michigan State 33/1: Give me this. GIVE ME ALLLLLLLLLL OF THIS.

Michigan State ranked 21st last year in S&P+ and rank 1st in returning production. A combination of LJ Scott at RB, Brian Lewerke at QB, and Felton Davis, Cody White, and Darrell Stewart Jr. at WR will help them improve on offense. They ranked 4th in defense in 2017 and return pretty much everyone. You have all that and at 33/1 odds? Again, GIVE ME ALL OF THAT!!!!

Michigan State’s schedule is tough, but they catch Ohio State/ Michigan at home, avoid Wisconsin, and play Penn State on the road. We will be able to hedge in those three games and still have a 20/1 or so position going into the Big 10 Championship game if Michigan State ends up winning the East.

Wisconsin, yet again, has a wide-open path to the Big Ten championship game. They have three tough games: Iowa, Penn State, and Michigan, all of which are away. The Iowa game aside, Wisco will be able to drop one of the Penn State/Michigan games and still make it to the Big Ten championship game with a shot at the playoff. Hedge opportunities galore.

I’m not going to put in a bet on Wisconsin yet, but I think the 25/1 position wouldn’t be a bad one to have come September.

Notre Dame 33/1: I want to be on board with Notre Dame this year. Phil Steele has them as his #1 surprise team this year, they return the 20th most production in the country, and have a schedule that could place them in the CFP if they go undefeated. That schedule is difficult, however. They catch Michigan, Stanford, and Florida State at home, but have to travel on the road to take on Virginia Tech (gulp) and USC. There are a lot of questions for the Irish: will Brandon Wimbush step up at QB or will Ian Book take over? Dexter Williams seems like a fine replacement for Josh Adams, but will he be enough? The defense returns the most production in the country from last season, but will they take the next step to become a true, dominant top-10 defense? 33/1 is good value, but I want to do a bit more research on them before making an official play.

Washington 25/1: Rather than Clemson, this is my favorite play. Washington returns the 22nd most production in the country from a team that ranked 5th in S&P+ last season. Jake Browning is one of the best QBs in the country and Myles Gaskin is underrated at the RB position. Outside of Vita Vea (a big loss, literally), the defense returns pretty much everyone fresh off a dominant season.

My only concern is the Pac-12 typically eats themselves alive. Washington will meet Stanford at home this year, but do have a season opener against Auburn that will dictate where their season goes. Games at Wazzu, Oregon, Cal, and Utah won’t be easy either. They will be favorites in those games, so a minor hedge in all of them will only bring down your position to 20/1 going into the Pac-12 championship game or you will escape with a unit or so of profit. There could even be a scenario where they lose to Auburn week 1, run the table, and still make the playoff. Good VALUE!!!!!!!!!!!!

Example of a hedge:

You now enter the Pac-12 championship game with a profit or a 16/1 Washington ticket.