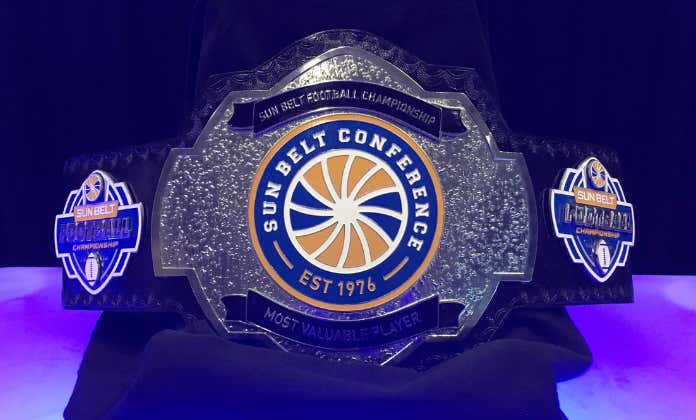 One of the qualms I have with college football is many conferences and teams take themselves way too seriously. The tradition, pageantry, and culture around college football are what makes the sport so much damn fun. We are talking about college kids here and often times the higher-ups expect them to act like robots. College football is supposed to be fun, allow the college kids to be college kids. This is especially true for the group of five conferences/teams. If they want to build a fan base, they need to be different, they need to add creative aspects to their games. That’s exactly what the Sun Belt, aka the #FunBelt, is doing:

I LOVE it. The #FunBelt will never compete with the SEC, but they can be a conference that is fun to follow. Moves like this will allow them to build a bigger following than they have had. Other conferences should look at what the Sun Belt is doing and follow. Take the minor league baseball model and apply it to the conference as a whole. Have ridiculous promotions to bring students and fans to the game. Play games on Tuesday nights during the fall when nothing is going on. Embrace legalized gambling. Be ahead of that trend. Continue to do cool things like the MVP belt. Bring in a WWE superstar to give the belt to the MVP of that game. Imagine somebody like the Miz coming out, cutting a promo, and awarding a player that belt!!!

Market the #FunBelt aspect and become a conference that college football fans love watching and gambling on during a random Tuesday night in the middle of October. That’s how they will increase the value of their conference much better than trying to be an SEC wannabe.