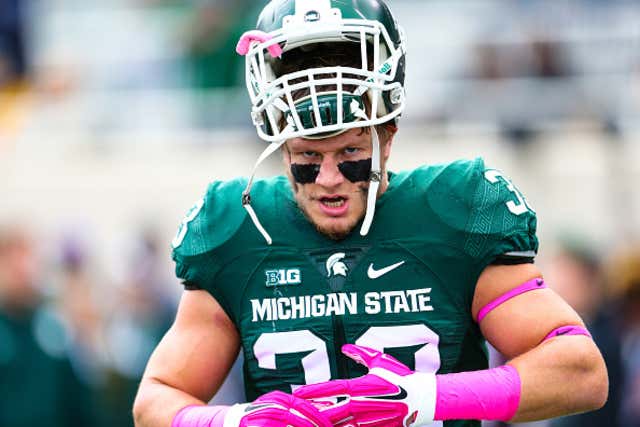 Back in February 2017, Michigan State LB Jon Reschke was kicked off the Spartans football team after a text leaked of him using a racial slur in a message about a teammate:

“Honestly don’t know who for sure but probably (teammate’s name redacted) or another s****y f*****g (N-word) with no morals,” Reschke wrote in an undated text message obtained via screenshot by the Free Press.

Definitely not the greatest thing to say about your teammates!! Reschke should’ve reconsidered that text which ended up resulting in his dismissal from the football program:

Fast forward to today, where Mark Dantonio was on the podium at Big Ten Media Days. Back in April, it was noticed that Reschke was on the fall roster. Dantonio stated that it was up to the team on whether he would be active or not. After Dantonio’s comments today, it’s apparent that the players on the team voted to allow Reschke back on the team:

“I talked to our football team and our players and said, ‘Hey, if you guys want him back, then you have to bring him back,’” Dantonio said. “It has to be a decision made by our African-American players, led by them, and they have to support that.”

“Our football team has forgiven him, I think. If they haven’t, that’s something we’ll deal with on an ongoing basis.”

Dantonio has handled this well. They made the right decision to dismiss him from the team in 2017. Allowing him back on the team now, after African-American players approval, also seems to be appropriate.

Dantonio gets it. There’s no surprise that he has had so much success at Michigan State (3 big ten championships, CFP appearance, 100-45) with this mindset. There’s time to be an authoritarian and there are other times to listen closely to your players.

Reschke will be a good addition on the field for Michigan State. The 5th year senior (given an extra year of eligibility) has had 99 tackles during his time at Michigan State, 7.5 tackles for loss, and 3 forced fumbles. The Michigan State defense returns the 5th most production from their 2017 unit that ranked 4th. I expect big things out of the Spartans this year and view them as a dark horse contender to win the Big Ten.

P.s. Reschke will finally get a chance to deliver on this 2016 tweet. I’m sure Michigan fans haven’t forgotten about it.