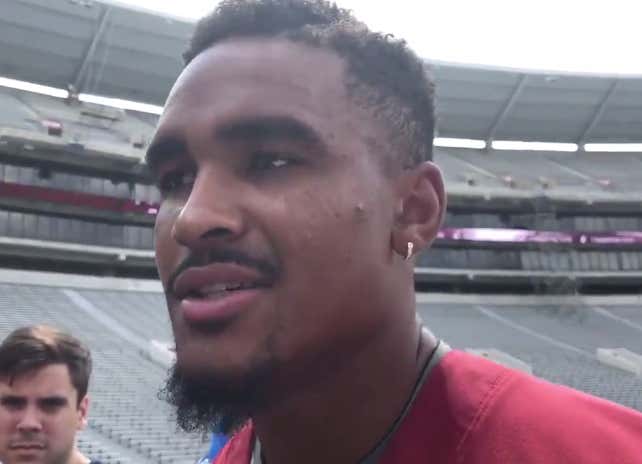 The biggest discussion in Bammer land heading into media days was the upcoming QB competition between Tua Tagovailoa and Jalen Hurts. Alabama players usually keep their feelings close to the chest, so any comments of substance weren’t expected. That was until Jalen Hurts decided to drop kayfabe:

[Insert Jalen HURTs feels HURT joke here, I already did mine in the headline]

Completely out of the ordinary for an Alabama player. Jalen is here, talking like an actual human, instead of the robot he’s expected to be. He’s showing humility. That is NOT apart of the process (Nick Saban created the process, not the Sixers, remember that), Jalen!!!

At this point, I want you to step back and think about being Jalen Hurts. It’s January 8th, 2018 and you are getting ready to lead Alabama onto the field for your second consecutive national championship game. In your 27 games started at Alabama, you are 25-2. You get benched for a freshman QB from Hawai’i in the second half of that title game, and he throws one of the most famous balls in CFB history to win the national championship. You’ve achieved your dream of being a national champion, but you watched it from the bench. How would you handle that?

Then for the next 7-8 months, you have to hear about not being wanted by Alabama fans as you embark on a QB battle against the guy who replaced you in the national championship game. You feel underappreciated, Tua gets all the attention, but what about your 4000+ passing yards, 40 TDs, 143.5 QBR, 1800 rushing yards, and 21 rushing touchdowns?! You keep quiet, eat shit for the sake of the team, and then finally let your feelings known in a completely appropriate manner. What happens?

Would it have been better for Jalen to keep those thoughts to himself? Sure. It came across sort of whinny, but it still makes sense. Jalen’s always had a great reputation as a teammate and player, this comment doesn’t change that.

P.s. Hate to say this was predictable: