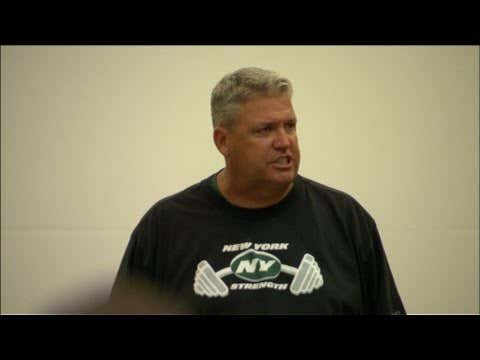 If you haven’t heard, Hard Knocks returns tonight to chronicle the Cleveland Browns training camp. Like any reality show, Hard Knocks has become less entertaining. There are players that are in on the joke and organizations have seen the downsides of exposing too much of their culture. The last true Hard Knocks came in 2010 when Rex Ryan’s 2010 New York Jets were featured. I am biased as a Jets fan, but this was the series best season.

Probably the most iconic moment from the season. Rex Ryan will be remembered for a lot of outrageous things, but whenever NFL fans hear “let’s go eat a goddamn snack” they’ll always think of Sexy Rexy.

“We got the most gangsterest team eating cheeseburgers on the field”

Often forgotten is the “let’s go eat a goddamn snack” rant was inspired after the Jets defensive backs were eating Micky D’s cheeseburgers on the field before a public practice:

This was my favorite moment of the season.

Antonio Cromartie struggling to name all his kids:

This is one of the most unbelievable moments in TV history. Cromartie is a specimen, not even a vasectomy works on him:

Lead The League In Fucking Wins:

No, you’re not misremembering, the Jets did not lead the league in wins in 2010.

Rex storming out of office as he is negotiating with Revis’ agent on the phone:

The New York Jets organization, in one video:

This was the exact moment when you knew the 2010 New York Jets offense was doomed:

“Man, I figured it out” hilarious:

GET THE FUCK OUT MY DRILL: