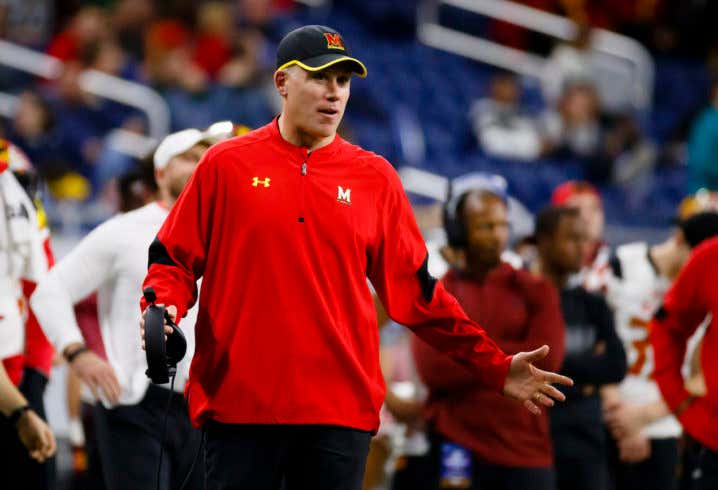 The Big Ten East is the land of coaches placed on administrative leave: 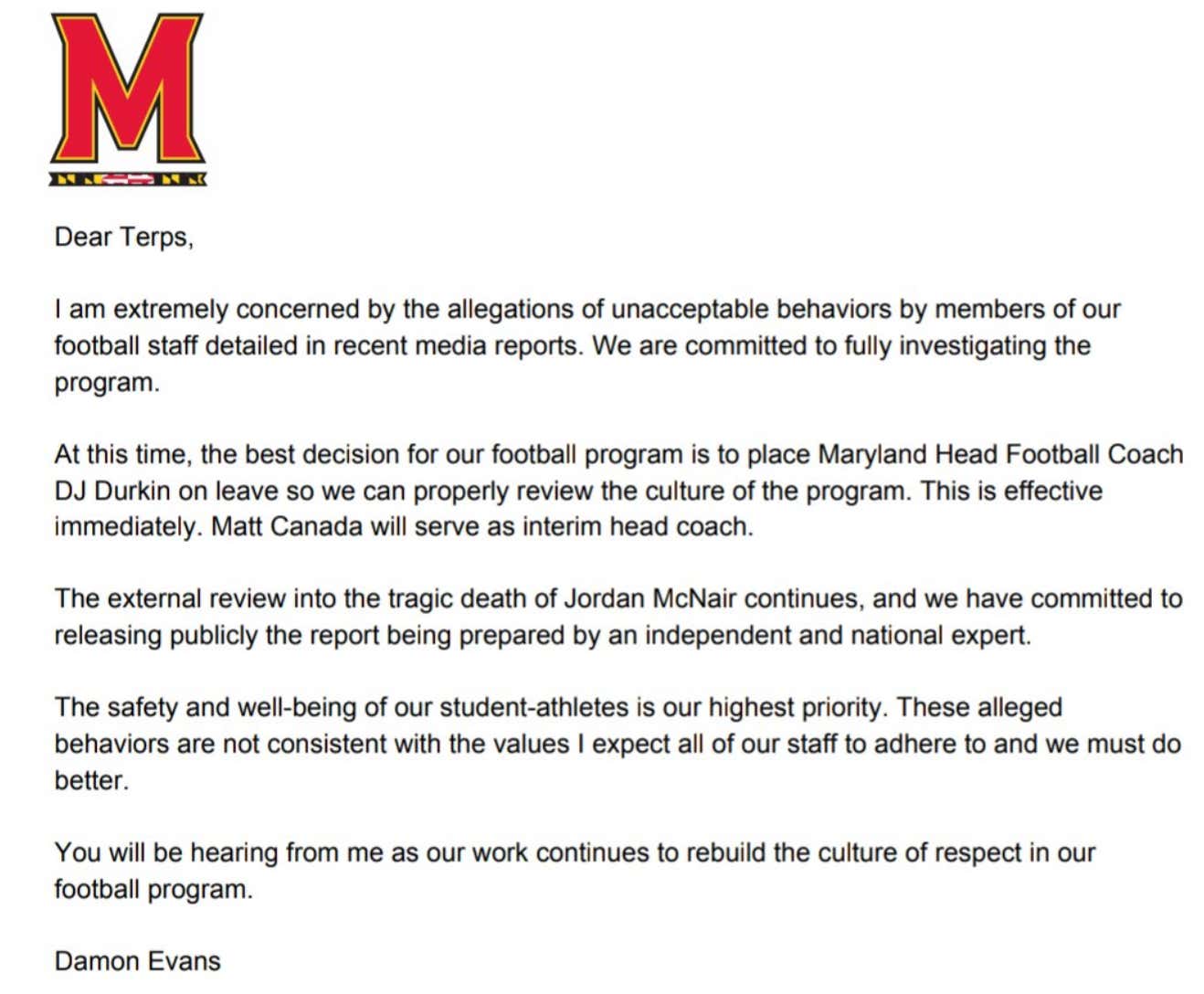 This comes after a report was published yesterday concerning the “toxic culture” under DJ Durkin. Athletic trainers Wes Robinson and Steve Nordwall, plus assistant athletics director for sports performance Rick Court were also placed on administrative leave. This is all coming as a fall out from Jordan McNair’s tragic death two weeks after being hospitalized following a team workout in May.

SOURCE-two detailed reports shortly before on Friday evening, one detailing physical signs McNair was showing before he collapsed and another, much broader, look into what was described as a “toxic” culture that Court and head coach D.J. Durkin have installed in College Park.

“There were multiple people that said, ‘Wow, Jordan looks f—ed up, he doesn’t look all right,’” one anonymous player said of the May workout in question. “We knew he was really exhausted, but we didn’t know he was in danger of his life. But that doesn’t mean that a medical professional shouldn’t know to put him in an ice tub.”

McNair’s cause of death was ruled a heatstroke. It doesn’t seem that the ice tub treatment by a Maryland medical official is confirmed, but if that did happen, that is incredibly unsafe. The danger of your body going into shock because of cold water, after overheating, should be known. (EDIT: submerging somebody into an ice bath after a heat stroke is a respected technique to help lower a body’s core temperature to a normal level. There are risks that can arise but lowering the bodies core temperature is the #1 goal after a heat stroke. Thanks to the PT stoolie that reached out to me to clarify this and explain how my small brain misspoke).

Just as critical for the program were additional allegations regarding the culture at Maryland that have been established the past few years under Durkin and his top lieutenant in the strength and conditioning program in Court….

-There is a coaching environment based on fear and intimidation. In one example, a player holding a meal while in a meeting had the meal slapped out of his hands in front of the team. At other times, small weights and other objects were thrown in the direction of players when Court was angry.

-The belittling, humiliation and embarrassment of players is common. In one example, a player whom coaches wanted to lose weight was forced to eat candy bars as he was made to watch teammates working out.

-Extreme verbal abuse of players occurs often. Players are routinely the targets of obscenity-laced epithets meant to mock their masculinity when they are unable to complete a workout or weight lift, for example. One player was belittled verbally after passing out during a drill.

-Coaches have endorsed unhealthy eating habits and used food punitively; for example, a player said he was forced to overeat or eat to the point of vomiting.

I love college football, but the culture that surrounds it is very dumb sometimes. Belittling somebody for passing out during a drill is gross. The slippery slope can be catastrophic as we see here. Players won’t want to be the one called out or, in this case, forced to “eat candy bars as he was made to watch teammates working out.”

Perhaps the most damning statement that the report included was this quote from a former Terps staff member: “I would never, ever, ever allow my child to be coached there.” There were also several current or former players who spoke about the conditions under Durkin in the report as well and none paint a flattering picture.

This is a tough loss for Maryland, who is looking to have a rebound year after a disappointing 4-8 2017 season. Hopes were high considering their top two QBs (Maryland’s QB position is cursed) and best defensive player from 2017 return from injury. We all remember how good Maryland looked against Texas, when their team was healthy. Plus, Maryland has recruited back-to-back top 30 recruiting classes. Being in the Big Ten East is always tough for teams like Maryland, Rutgers, and Indiana. If they want to find themselves in postseason play, the little things matter. Losing your coach just a few weeks before their opener can derail their season.

Matt Canada (Ed Orgeron’s ex) will serve as interim coach until the investigation is complete. We’ll keep you updated on this story.

8:50 PM: A group of parents of current Maryland football player’s are coming together to support Durkin:

SOURCE-Keisha Staples, the mother of Maryland defensive back Antoine Brooks Jr., told the AP she is close with a group of about eight players’ parents who would like to meet with athletic director Damon Evans and school officials to voice their ”full support” for coach DJ Durkin.

”I don’t want the stigma to be at Maryland this is a toxic culture,” Staples said. ”This is a football culture.”

She added: ”They’re already dealing with the death of their teammate. Now they have to deal with the loss of their coach.”