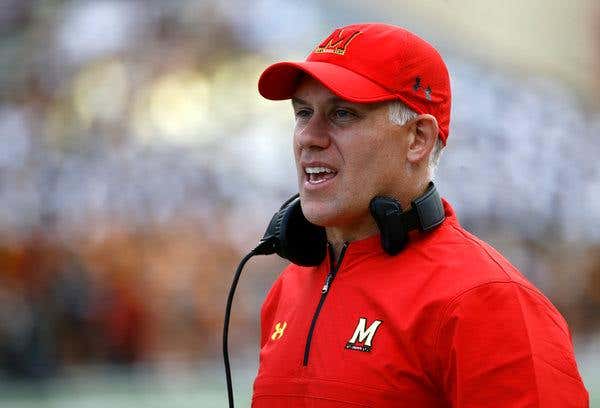 Over the weekend, Maryland Head Coach DJ Durkin was placed on administrative leave amidst review of Jordan McNair’s tragic death. Durkin’s “toxic culture” was exposed in a recently published article that detailed workouts with “one example, a player whom coaches wanted to lose weight was forced to eat candy bars as he was made to watch teammates working out” and “belittling verbally after passing out during a drill.”

Today, a quote from Durkin back in May resurfaced that does not help the coaches case:

DBK News-“When asked at a journalism school event May 9 about the concussions and head trauma often linked with playing football, Durkin denied there was a link between concussions and CTE — citing an unreleased Department of Defense study — before extolling the virtues of playing football. He called it the “ultimate team sport” due to the values it instills in its players.

“[You learn] life lessons, that I don’t know where else they can be mimicked or translated in the same way,” Durkin said. “Our society is going in a direction where it’s the opposite of that. So where else does someone learn how to be a part of something bigger than themselves? How to be accountable to more than just yourself? How to take ownership of what’s going on?”

Nothing a football coach likes more than talking about how football is the cure to all societies problems. They are like the aunt at your family dinners that won’t shut up about some social justice issue.

If I was an Athletic Director of a P5 school, I would forbid my coach from talking about CTE altogether. Just leave the CTE topic alone. Nobody benefits from it. Just ask Larry Fedora:

Durkin’s points about being apart of something bigger than themselves, accountability, and ownership all ring true. You can say all that about football without denying linkage between CTE and football.

Is CTE proven to be caused by playing football? Not necessarily:

Yahoo-“I totally agree with him,” says Peter Cummings, a neuropathologist and associate professor of anatomy and neurobiology at Boston University School of Medicine. “Association is not causation. CTE has also been found in individuals not exposed to contact sports. It’s not a settled matter by any means. And football is safer today than it has ever been. In fact, I would argue that no other sport has made a more radical transformation in response to safety concerns than football. His comments reflect the reality of the scientific uncertainty surrounding CTE.”

Science is confusing for scientists. Science is beyond confusing for everybody else, especially football coaches. Although there is no definitive answer yet on this topic, saying CTE and football aren’t linked is still dumb. Better to leave that one alone.