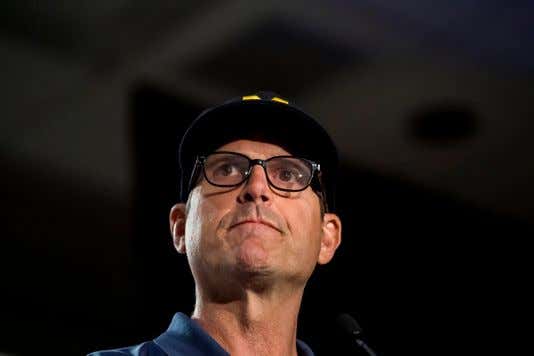 On Friday, news came out that Michigan, Marquette, and Cal (all under Air Jordan) also potentially had student-athletes that sold team-issued shoes.

Yesterday, a story dropped that detailed the Ann Arbor-based sneaker seller that allegedly resold one of the shoes for a Michigan player:

SOURCE-Ann Arbor sneaker seller Yutaka Morishima confirmed that a member of the University of Michigan’s football team sold him a pair of Michigan Air Jordan 12’s in early December of 2017, which he later resold on StockX. ESPN reported late Friday evening that Michigan, alongside California and Marquette, were investigating whether or not team-issued shoes had been re-sold.

Yutuka Morishima is NO MATCH for Jim Harbaugh, though.

SOURCE-“There were a couple shoes that were reported to be out there, we’ve gone through everybody that’s currently on the roster and they’ve accounted for those pairs of shoes,” Harbaugh said.

Accounting for all of these shoes is obviously beneath Harbaugh, but I can see the ole Football Guy personally going player to player making sure they have their team-issued J’s. Going dorm to dorm, going through closets. Finding the Jordan’s with an enthusiasm unknown to mankind. Counting every single Jordan, one by one. Not making players leave conditioning until they remember where they left their Jordans.

“The latest (pair) I saw (on the market) was a No. 52 (pair of shoes). There’s nobody currently on the roster that had that number last year.”

I could also see Harbaugh diving head first into the eBay marketplace, constantly refreshing his iPhone to see any new listings of “Michigan Jordans.” Constantly frequenting random Facebook groups where sneakerheads sell shoes. All in the name of keeping his team intact. A true football guy.