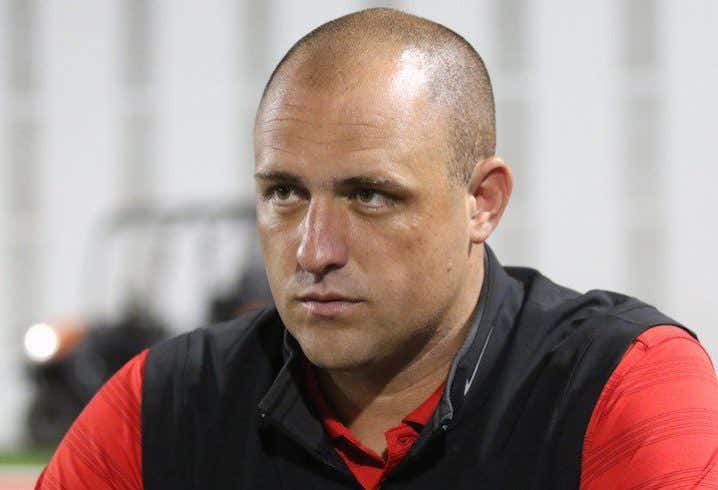 I don’t want to hype this up too much, but I would highly suggest sitting down before reading this bizarre story on Zach Smith:

SOURCE-Documents and receipts Stadium has obtained show Zach Smith ordered more than $2,200 in sex toys, male apparel and photography equipment and had the items delivered to him at Ohio State’s Woody Hayes Athletic Center in 2015.

All of the items were delivered to “Zach Smith, Woody Hayes Athletic Center, 535 Irving Schottenstein Drive, Columbus” between February and May 2015. Copies of some of those documents are listed below.

Well, Michigan and Michigan State fans are going to be sending sex toys to that address for the rest of eternity now. Thanks, Brett.

Courtney Smith said Zach Smith took multiple photos of his penis inside the Ohio State coaches’ offices, inside the White House when the Buckeyes visited in 2015 and also photographed himself in the coaches’ offices receiving oral sex and having sex with a OSU staffer.

After winning the 2014 national title, the Buckeyes were honored at the White House on April 20, 2015.

Brett McMurphy checking the timestamps on a dick pic from the White House. That’s what 2018 journalism is all about, folks. Timestamps and dick pics.

Stadium will not publish the penis photos or the photos of the Ohio State staffer, who is no longer working with the football program.

McMurphy continued this article by bringing up his text exchange with Zach Smith’s attorney:

Koffel: Sounds like extortion. Thanks for the texts Brett. I’d get a lawyer if I were you.

McMurphy: Not extortion. I’m not asking for money nor have I received any money. I’m asking for your comment to my original question: what was the purpose of taking these photos and why were the items delivered to the Woody Hayes Center? And did Urban Meyer have knowledge of any of this?

I laughed out loud when I read “did Urban Meyer have knowledge of any of this?” Brett McMurphy really asked if Urban Meyer had any knowledge of Zach Smith taking a dick pic in the White House. Not only did McMurphy ask this, he is publicizing the exact text exchange. Thanks for asking the hard-hitting questions, Brett.

The items were ordered and delivered mostly through Amazon from various companies/individuals including Captain Camo, StevenEven, Erogenos, Gypsy B and Devil’s Wink.

I have no idea what any of those things are. I do not know their purpose, nor do I want to. They sound and look weird: 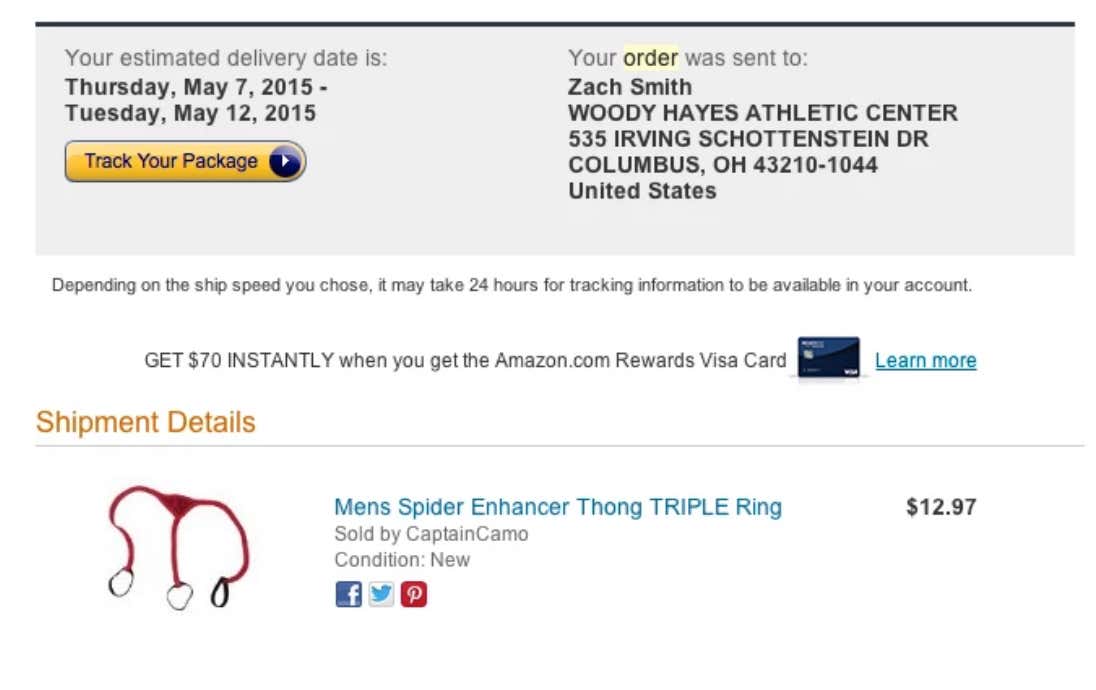 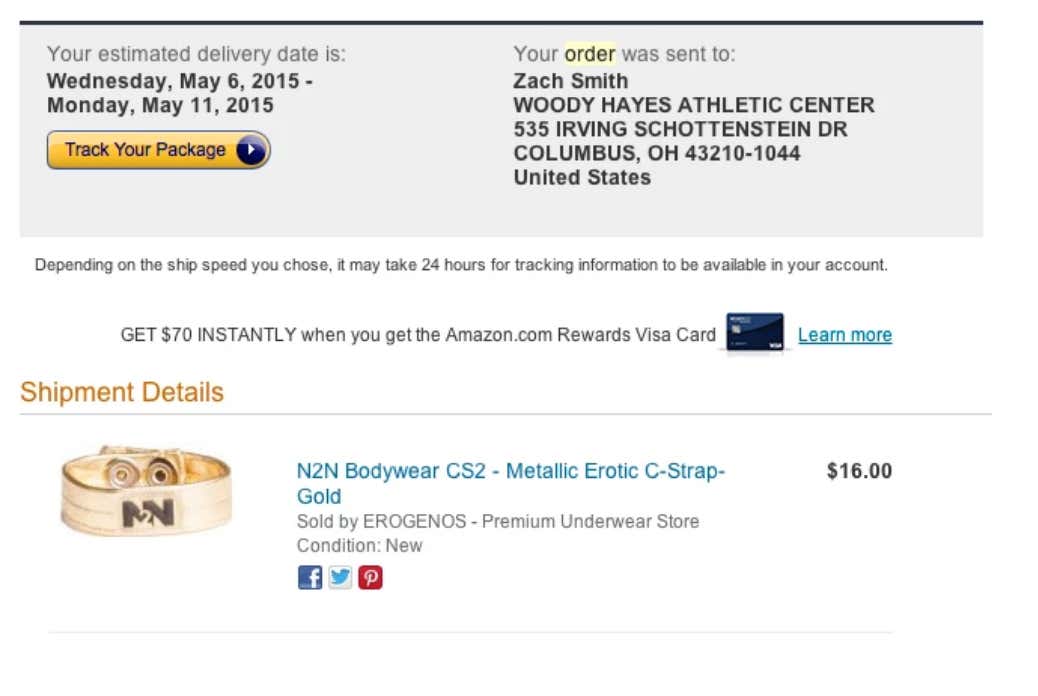 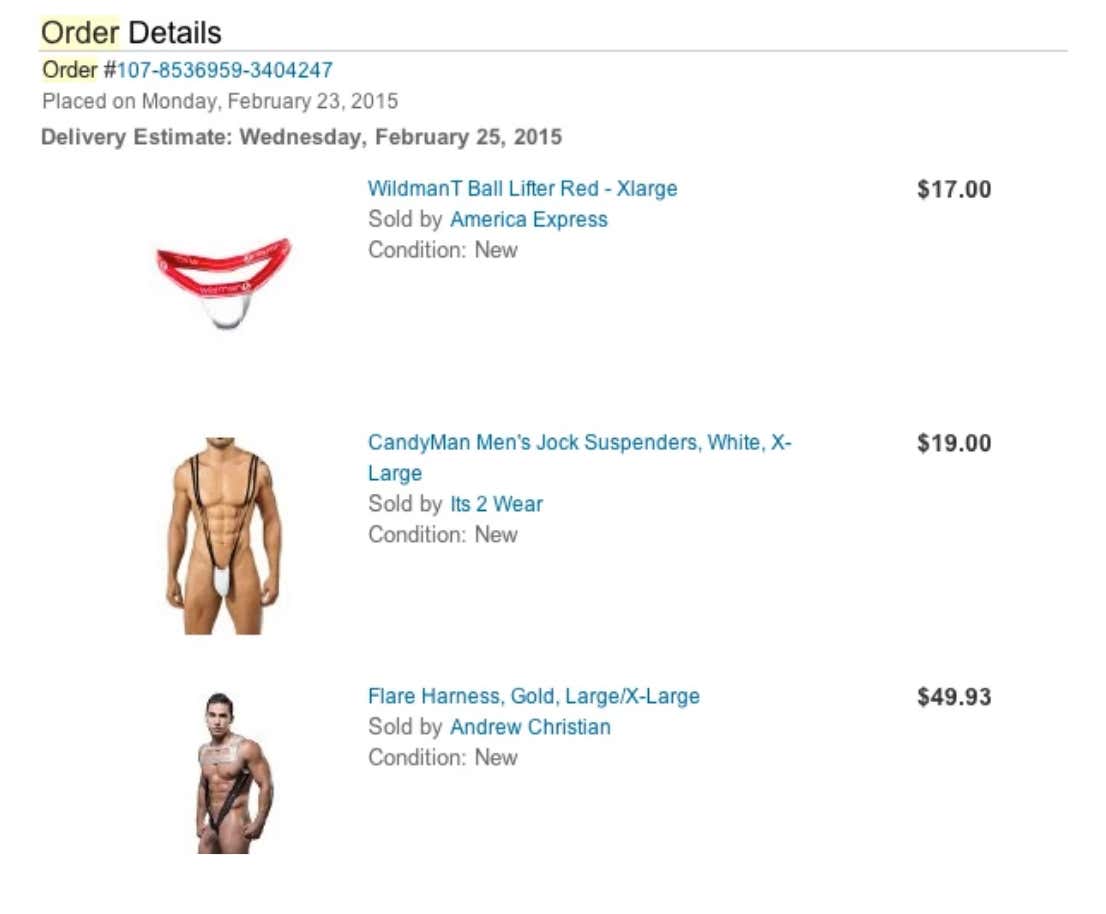 This is the first part of the story that I am glad I have no idea what is going on.

What does this have to do with Urban Meyer? Nothing. I don’t get the point in Brett McMurphy reporting this. Throughout this entire story, he has been seen as the professional, capital J Journalist that is only reporting the truth through proper avenues. He, also, has gotten the support of other media members. He was the gold standard when it came to this saga. Now he is talking about sex toys and dick pics. What is Urban supposed to do? Go through everybody’s mail? Quite the lack of oversight by Urban not knowing that his assistant coaches are getting sex toys delivered to the office! Shame on you, Urban! Shame on you!

Brett is calling these “disturbing revelations in the Ohio State saga.” I mean, I guess? To me, it’s just weird, funny, and another great piece of potential trash talking to use on OSU fans. Are college football coaches now supposed to vet their assistants for weird sex lives? The bottom line is simple: if Urban Meyer knew of domestic violence against Courtney Smith and covered it up, he should be gone. Zach Smith being a weirdo, the dick pics at the White House and sex toys delivered to Woody Hayes Athletic Center have nothing to do with that bottom line.