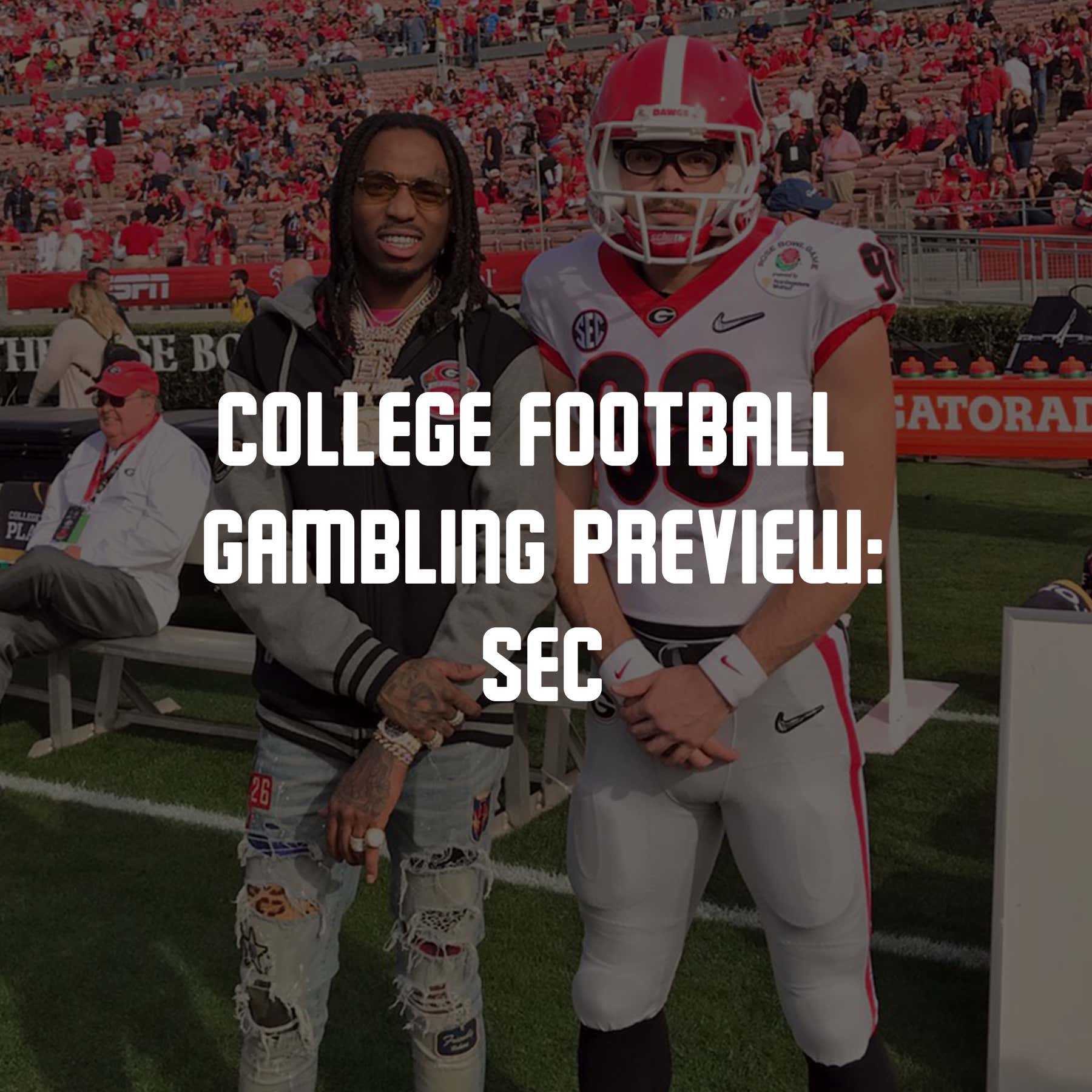 I’m in love with Georgia in 2018. Let’s start with their schedule, that ranks 54th in strength. 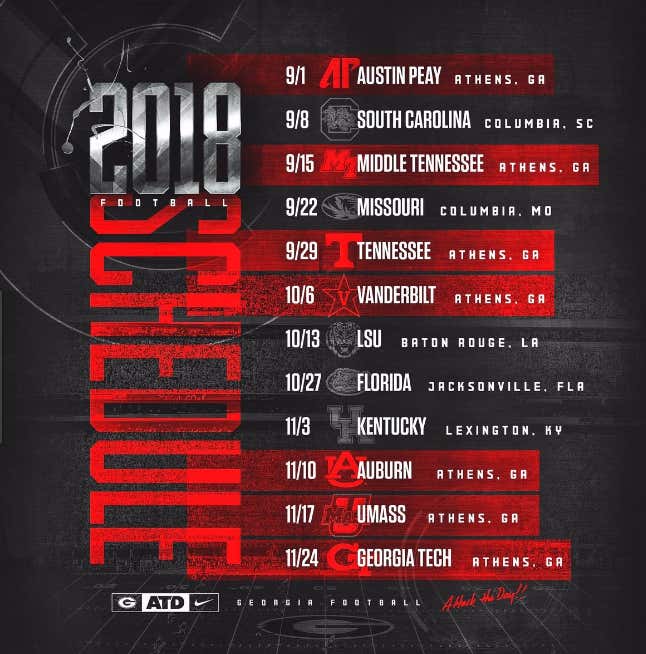 Where are the two losses? Auburn? That’s at home. @ LSU? They are not looking great for 2018. Georgia is in the same tier as Alabama, Ohio State, and Clemson. Jake Fromm returns at QB and even though Nick Chubb and Sony Michel are gone, the RB unit of Deandre Swift, Brian Herrien, James Cook, and Elijah Holyfield (yes, Evander’s son) is still one of the best in the P5. The offensive line returns 69 starts (nice) and WR’s Terry Godwin, Mecole Hardman, and Riley Ridley. The x-factor for this offense is 5-star freshman QB Justin Fields. Rumors have it that he has looked better than Jake Fromm in fall camp. Could this be the third straight year Georgia replaces their QB because of an incoming Freshman?!

The defense should be top-10 again, returning half of last years starters. Like Alabama, the backups from last year were all 4 & 5-stars that are ready to step into starting roles. I don’t see this team not getting to the SEC championship game with at least 11 wins. I see that game opening with a 3 or so point spread. Georgia will be an underdog, but much lower than +250. That’s the definition of value. BOOM.

I don’t think he’ll know what a bowl game feels like in his first year. The offense will attempt to transform into a power run game even though they are losing RB John Kelly. The QB situation won’t help out the run game either, which will be manned by Jarrett Guarantano or Stanford transfer Keller Chryst. The defense has depth questions throughout every unit and doesn’t have any known playmakers.

The depth concerns are the main reason for this bet. They start the season against West Virginia and then will get 2 wins against ETSU and UTEP, but then go on a stretch for the ages: Florida, @ Georgia, @ Auburn, Alabama, and @ South Carolina. I see them entering their final 4 games with 6 losses and a decent amount of injuries due to the physicality of that 5-game stretch. Their final 4 games are Charlotte, Kentucky, Missouri, and @ Vanderbilt. Can they go 4-0 in those? I say no.

The former Fordham head coach and PSU offensive coordinator had as much to do with Penn State’s success over the past 2 years as anyone. He inherits a team that returns the 8th most production in the country. Nick Fitzgerald and Aeries Williams are not Trace McSorley and Saquon Barkley, but they are damn close. Throw in three of the top five receivers from last year returning and an experienced offensive lineman and you have a top-10 offense with the wizard Joe Moorhead.

The defense should be good as well. Outside of Alabama and Clemson, they have one of the best defensive lines in the country with Jeffery Simmons. There’s experience in the back 7 as well. They catch Auburn, Texas A&M and Florida at home. An OOC Stephen F. Austin, Kansas State, Louisiana Tech, and ULL will result in 4 wins. I see this as a 10-2 team.

Refer to the best bet section for more on Mississippi State.

South Carolina is a trendy pick as a dark horse for the 2018 season. QB Jake Bentley, WR Deebo Samuel, and WR Bryan Edwards return for an offense that ranks 15th in returning production.

I do have concerns about their defense, that has to replace most of last year’s havoc inducers. Overall, they are replacing the 11th most production of any defense in the country. Will Muschamp is a great defensive coach, but this could be his downfall for the 2018 season.

We’ll know a lot more about South Carolina after week 2 when they play Georgia at home. If they’re going to hit the over on 7.5 wins, they’ll have to win games at Kentucky and Ole Miss.

Dan Mullen has had a hell of an offseason:

This Florida team has A LOT of talent, BUT they are young. The offense had a strong line last year and everyone returns to lead the way for RBs Malik Davis and Jordan Scarlett. There is talent in the WR core, specifically with Ole Miss transfer Van Jefferson, but who is going to throw them the ball? QB Feliepe Franks starts the season as the guy, but will he stick?

Dan Mullen brings Todd Grantham with him to Gainsville to be his DC. Grantham LOVES to be aggressive, but that style may cause growing pains with a Florida defense that ranked 118th in explosive plays allowed in 2017.

Overall, this Florida team return the 21st most production in the country. They will go up against a tough schedule (42nd) that features road trips to Florida State, Georgia, and Mississippi State.

Missouri is returning one of the most explosive offenses in the country led by QB Drew Lock (future 1st round pick), TE Albert Okwuegbunam, RB Damarea Crockett, RB Larry Rondtree, and WR Emmanuel Hall. They do lose OC Josh Heupel, who is now the HC at UCF, and made a curious hire with Derek Dooley. Why bring in an old-school football mind with an offense like this?

Missouri played like a top-20 team to end 2017, but those 6 games were against Idaho, UConn, Vandy, Arkansas, Florida, and Tennessee. The run defense should be a strength, but questions on defense came at their pass rush and safety. Missouri is going to be in a lot of games this fall. Can they win games @ Tennessee, @ Purdue, @ Florida, and against South Carolina? How they do in those 4 will determine if they are 9-3 or 6-6/7-5.

We are heading into the 6th year of the Mark Stoops era in Kentucky. He loses QB Stephen Johnson but returning RB Benny Snell Jr., an experienced group of receivers and an OL that features 5 players that have started at least 7 games will ease the transition of new QB Gunnar Hoak.

The defense should remain a strength, as they return the 7th most production in the country. What gives me pause with Kentucky is their schedule, the 43rd toughest in the country. Anything short of a bowl berth will be a disappointment for Kentucky and a potential firing of Stoops. Winnable games against Louisville, Tennessee, and Texas A&M are away. I’m leaning under.

Refer to the best bet section for more on Tennessee.

2018’s Vanderbilt will feature QB Kyle Shurmur and big-play threats WR Kalijia Lipscomb and RB Ke’Shawn Vaughn, who is replacing recording setting RB Ralph Webb. The secondary and pass rush with OLB Charles Wright should be a strength, but the problems will come up the middle with depth issues at DT and ILB. The 67th ranked offense must replace 2/3 top lineman, 2/3 top linebackers, and 5/8 top defensive backs. On top of that, they bring in a new DC.

They will face the 39th toughest schedule in the country, including an OOC game against Notre Dame. I lean under.

At the end of the day, this is most likely the most talented team in the country. I’m a Tua Tagovailoa believer and wouldn’t be surprised to see him hoisting the Heisman Trophy in December. He’ll have WR’s Jerry Judy, Henry Ruggs and Devonta Smith to toss the rock to. Four starting linemen are back to lead the way for a lethal RB combo of Damien Harris and Najee Harris.

The defense must replace last year’s top six tacklers in the secondary, 60% of their top linebackers, and 50% of their top lineman. The secondary is what gives me the most concern, but Nick Saban is the best secondary coach in the country. There is turnover with both coordinators, but I’d be surprised if they drop more than one game against a relatively easy schedule. We’ll be seeing Alabama in the college football playoff again (hot take, I know).

Refer to the best bet section for more on Mississippi State.

Jarrett Stidham returns at QB for Gus Malzahn and an Auburn Tigers team that should play at a top-10/15 level all season long. The big question for the offense will be if Kam Martin can step up at RB without Kerryon Johnson.

The defense will be great yet again for Kevin Steele. There is plenty of talent for a unit that should remain in the top-10.

Auburn has to face four top-15 teams away from home throughout the season (Washington, Alabama, Georgia, and Mississippi State). I see them finishing with a record (9-3/8-4) that doesn’t necessarily show the quality of their team.

This is a HUGE year for Coach O. He’ll rely on transfers QB Joe Burrow (Ohio State) and WR Jonathan Giles (Texas Tech) to save his offense that was incredibly disappointing last year with OC Matt Canada. New OC Steve Ensminger will have to craft an offense without Derrius Guice to make sure he and Orgeron stay employed.

It’s difficult to have too much concern over the defense that is led by Dave Aranda and features future 1st-round picks Greedy Williams and Devin White. Some may be surprised to see LSU’s win total at 6.5, but if you consider they play 3 games agaisnt top-8 opponents (Auburn, Georgia, Alabama), open with Miami, and have road trips to Florida and Texas A&M it makes sense.

Things could get bad for Coach O. If they do, I wouldn’t be surprised if you see Lane Kiffin on the sideline in 2019.

This Ole Miss team is going to be a lot of fun. Jordan Ta’amu emerged as a top SEC QB last season and he will be throwing to one of the best WR units in the entire country that features AJ Brown, Damarkus Lodge, and DK Metcalf.

On defense, the secondary should be good, but there are concerns with the rush defense that ranked 88th in rushing success rate and 118th in opportunity rate (percentage of carries that go longer than 5 yards) in 20187.

There are depth concerns throughout the team due to the transfers after the Hugh Freeze scandal. I could see them getting to 6 wins against Texas Tech, Southern Illinois, Kent State, UL Monroe, @ Vandy, and @ Arkansas. To get to 7 can they beat South Carolina at home or A&M on the road? I say yes and I lean over.

The 75 Million Dollar Man Jimbo Fisher starts out with a young, but talented roster. If you take a look at their offense, only 2 seniors will be playing big roles. That is good news for the 2019 Aggies.

Overall, A&M returns the 35th most production in America and bring in DC Mike Elko from Notre Dame. 75% of last year’s havoc producers return for one of the best defensive coordinators in the country.

Road trips to Mississippi State, Auburn, and Alabama and then a game against Clemson in week 2 probably caps Jimbo’s 2018 team at 8 wins. Will they go 8-0 against the likes of LSU, Ole Miss, and South Carolina to hit over 7.5 wins? I don’t think so and I am leaning under.

There are going to be issues at QB and the defense returns the 58th most production in the country (lost two starters during fall camp as well) from a defense that ranked 112th last year. Sure, RB Devwah Whaley is good and new HC Chad Morris shall effectively use a good receiving core, but it’s going to be a long year in Fayetteville.

Their OOC schedule is easy with Eastern Illinois, Colorado State, North Texas, and Tulsa. On top of that, they get Vandy at home. You can see 5 wins there. Where do they get the 6th? I’m not sure. I’d lean under. If you can find an under 6 wins at your book, I’d take that.