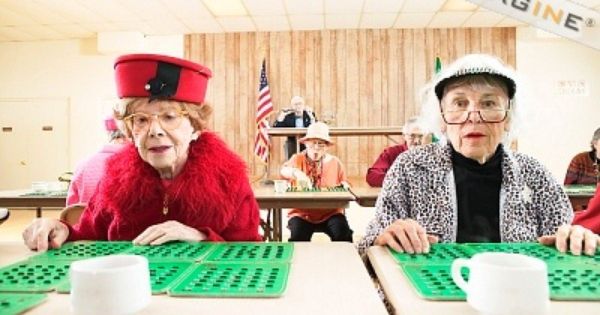 Sports betting is by far my favorite thing to do but I needed to find another itch before football season starts up. My grandmas are part of a senior group, which lead to them taking about Monday night Bingo. I was all over it and was expecting a nice light game of bingo with a couple of old geezers.

It was not. It is cut throat gambling with these bastards, you need to be on your toes at all times especially when Patrice is chirping in your ear all game. There is a ton of rules I would advise on brushing up on before you get into a game because I learned the hard way. A ball pops up on the screen so you can get a head start on marking your cards. I called out Bingo prematurely and all hell broke lose. This is by far the scariest situation I have ever been in, this is what they live for. This had most of the crowd riled up and things took a turn.

When a handful of numbers come out there are sounds that the players attach to them. For example, when N22 pops up everyone starts quacking and I loved every second of it. Patrice next to me said she has been practicing and let me tell you practice makes perfect. This quack was electric but it turns out some of the other players were sick of the Quack. One guy voiced his opinion to Patrice and all hell broke lose again. It almost came to blows until the priest called the police. (Yes this takes place in the bottom of a church) The cops showed up and Patrice tried throwing me under the bus saying I started everything by calling bingo prematurely. Fuck Patrice

All in all if you hear of an underground Bingo spot, GO. Theres a lot of money to be made and the hostile environment you wont be able to get enough of.