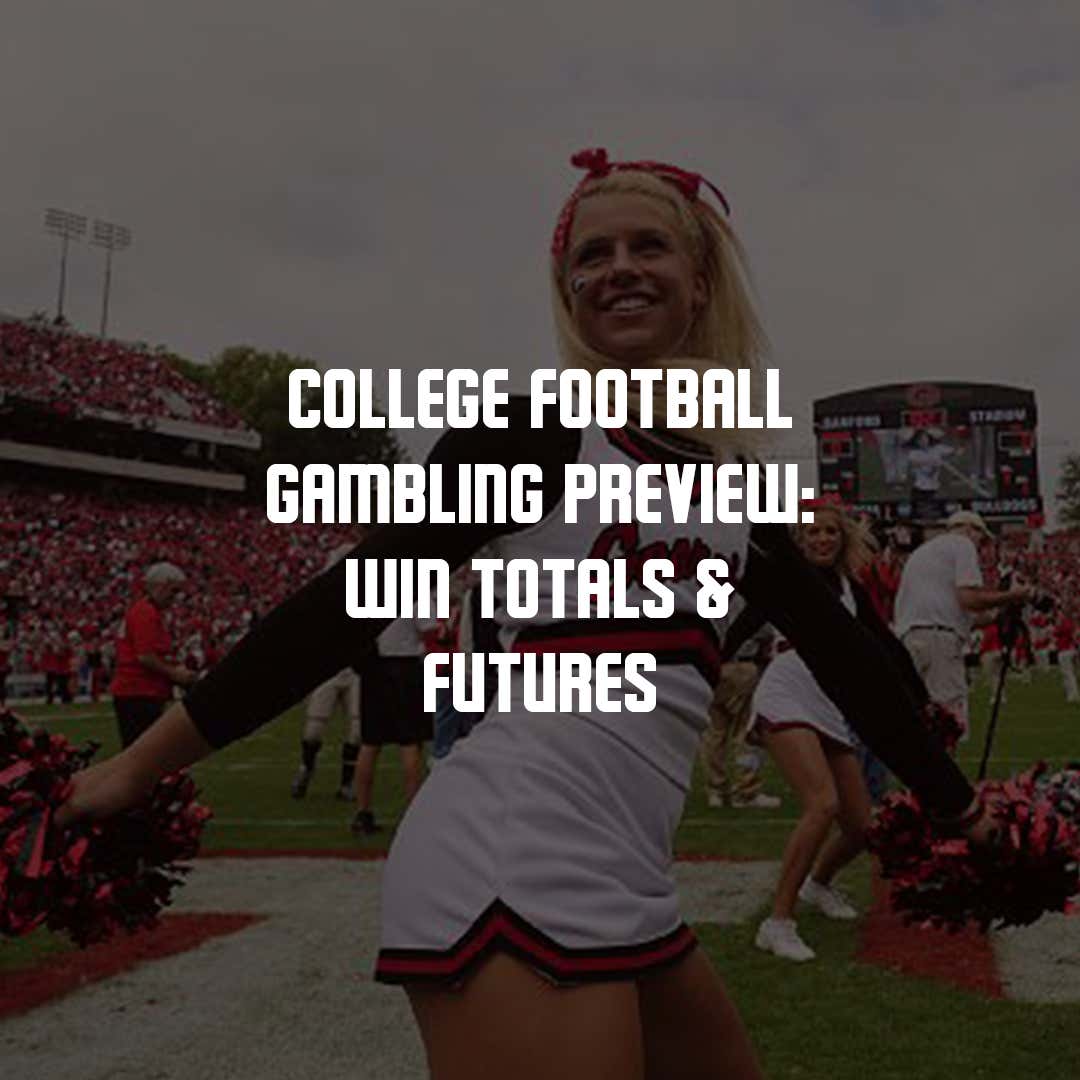 We are one day away from the official start of the college football season (this past Saturday didn’t count). We have previewed every conference at this point. Today, it’s time for my top win totals and other futures plays.

I’m big on taking positions on teams before the season. I’ll have 19 win totals, 2 conference plays, and 6 national championship plays in this blog. Each play (unless noted) are 1 unit. A lot of people don’t like to have money tied up throughout the season, so using a significant % of your bankroll for futures doesn’t make sense. Instead of having 20+ plays heading into the season, some like to have just a few futures plays. Knowing this, I’ve divided my plays into three tiers, in order of confidence. 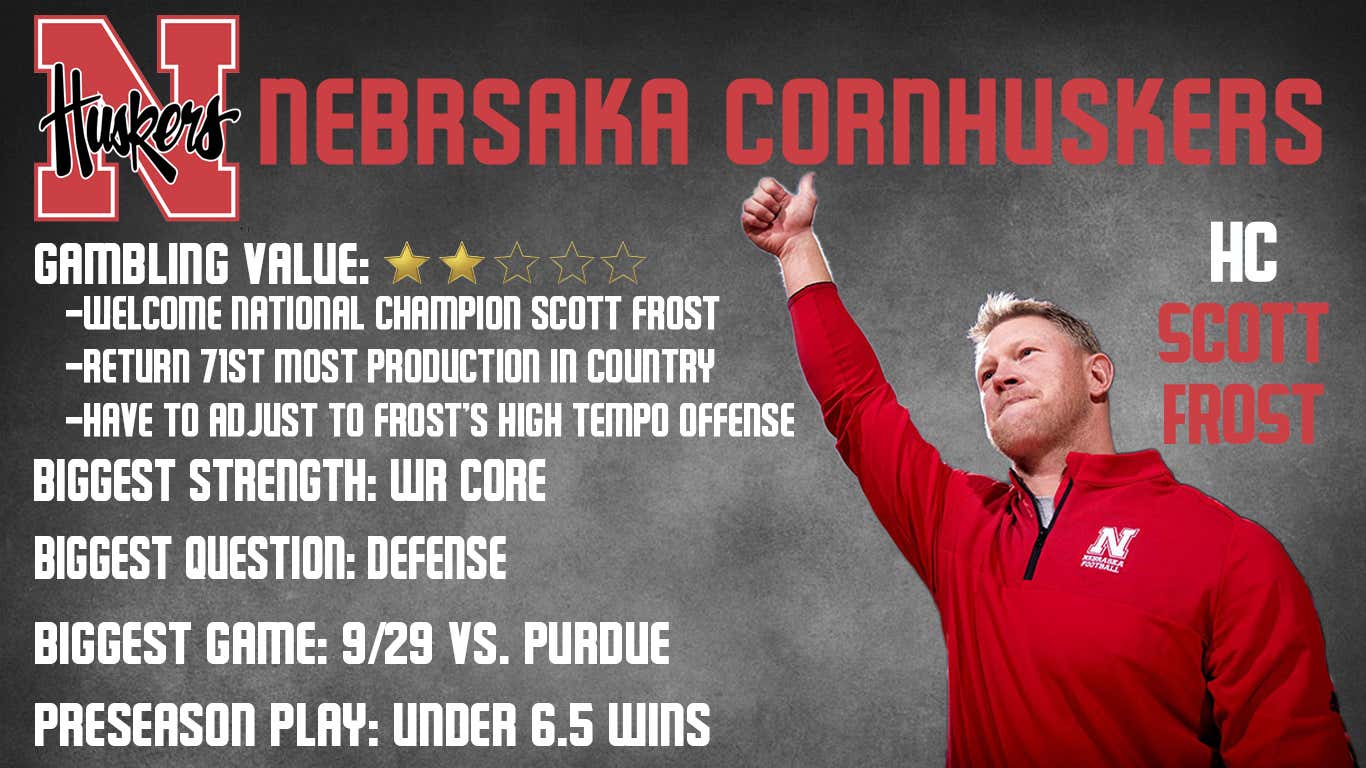 This season is going to be a season with a bunch of growing pains for Nebraska. The hire of Scott Frost was great, but can they overcome the growing pains of a new, up-tempo offense with a unit that only returns the 71st most production in the country. Their starting RB retired late last week and they will be starting a true freshman at QB.

They’ll most likely start 3-0 against Akron, Colorado, and Troy, but after that, I can’t find 4 wins in the Big Ten. We’ll give them Illinois, but their away schedule is: Michigan, Wisco, Northwestern, Ohio State, and Iowa. At home, they get Purdue, Minnesota, and Michigan State. Of those 8 teams, where are the three wins? I don’t see it. 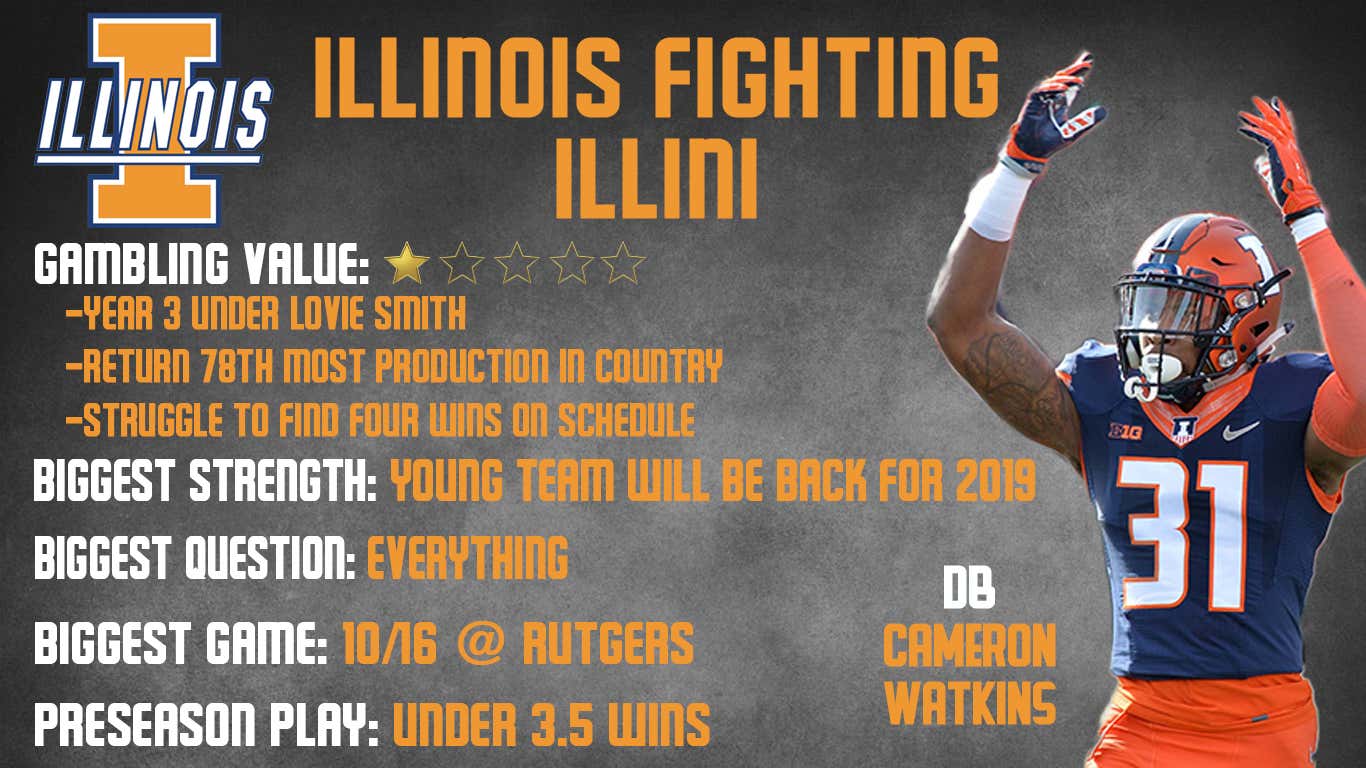 Illinois returns the 78th most production from a team that ranked 118th in 2017. The team is going to be starting sophomores everywhere and any injuries will derail this season even further. Outside of Kent State and Western Illinois, where are the next 3 wins? They have to travel to Rutgers and Maryland. We are laying a big number with -170, but getting under 4 wins is a gift.

The offense returns Jake Fromm, an RB unit of Deandre Swift, Brian Herrien, Elijah Holyfield, and James Cook, WR’s Terry Godwin, Mecole Hardman, Riley Ridley, and five linemen with 69 (nice) career starts. Plus, they add x-factor Justin Fields at QB. I’d be shocked if the defense, who returns half of last years starters, isn’t a top-10 unit again with all its talent.

I’m in love with Kirby Smart. His schedule is unbelievably easy. The toughest game will be against Auburn at home. The OOC includes Georgia Tech, Austin Peay, Middle Tennessee, and UMass. Sure, they may drop one against Auburn or @ LSU, but I don’t see them going less than 11-1.

Give me all the investment I can get on Mississippi State this season. Joe Moorhead comes in as my favorite offseason hire. Nick Fitzgerald and Aeris Williams aren’t Trace McSorely-Saquon Barkley, but they are damn close and I’m VERY excited to see what he can do with these two. On top of that, the offense returns 3/5 top receivers from 2017.

The Bulldogs return the 8th most production in the entire country this year and are entering the season ranked 14th in S&P+. The defense has one of the best defensive lines in the P5 and there is a load of experience in the back 7. They catch Auburn and Florida at home. I see this team finishing 10-2 and maybe shocking Alabama on November 10th.

UConn is heading into 2018 after a disappointing 2017, finishing 119th in S&P+. They lose OC Rhett Lashlee who relatively turned around the formerly disgusting UConn offense in 2017. They’ll be starting a Sophomore at QB and were looking to rely on a strong running game until their top 2 running backs were lost in fall camp (transfer and injury). This team is going to be starting freshman and sophomores throughout both the defense and offense. There are going to be a lot of growing pains.

An OOC schedule with Boise State, Syracuse, Rhode Island and UMass may cap them at 1-3. I don’t see them winning 3 games in the AAC this year, especially considering they have to travel to ECU and Tulsa. 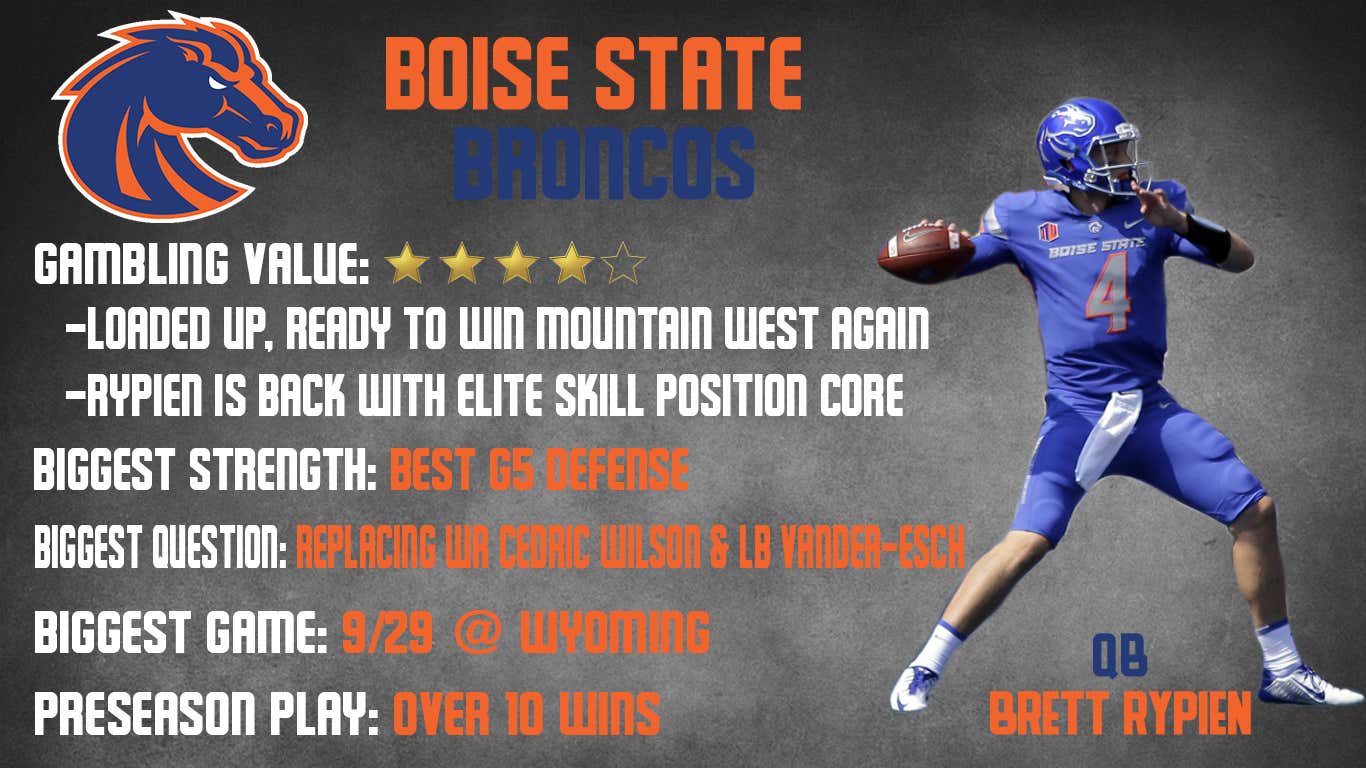 Here’s a (relatively) hot take: Boise State, not UCF, is the best G5 team in America. The Broncos return the 9th most production in the country from a defense that ranked 30th in 2017. Brett Rypien is the best QB in the Mountain West. I think they’ll be favored in every game outside of their trip to Oklahoma State in week 3, which they could still win.

Arkansas State is not Boise State or UCF, but Arkansas State is in the top tier of G5 schools. An offense that returns QB Justice Hansen and a WR core littered with players over 6’4, they are going to dominate the Sun Belt. Blake Andersen is one of the most underrated coaches in the country and I don’t see him being at Arkansas State after 2018 as he goes up a schedule that he’ll be favored in 11/12 games in (they play Alabama).

This team is going to be VERY bad.

I’m going to say that again: UTEP is going to be VERY bad at football in 2018. They will have to break in a new coach with a team that ranked dead last in S&P+ in 2017. There is no talent or depth on this team, which ranks 127th in 5-year recruiting rankings. Outside of Northern Arizona (which they may be underdogs against), UTEP is going to be underdogs in every game this season. If you take Rice (which is away) out of the equation, they’ll be underdogs of 10+ points in every game. This team could go 0-12.

Lane Kiffin is for real. It took him a while, but he is finally for real. This FAU team ranks 27th in S&P+ heading into 2018 and returns top-10 production from a defense that ranked 50th in 2017. The offense loses QB Jeff Driskel and OC Kendall Briles but thanks to phenomenal recruiting from the JUCO ranks and Lane being a brilliant offensive mind, they will be fine.

They’ll most likely start the season with a loss to Oklahoma, but outside of that, every game is winnable. UCF will be a tough game, but they aren’t that far off from the defending national champions. I see FAU entering into the CUSA championship game again at 10-2.

East Carolina is returning the 24th least production from a team that ranked 123rd in S&P+ in 2017. Scottie Montgomery is on a seat that cannot get much warmer. Starting QB Gardner Mishnew has transferred. Everything screams this team being god awful.

Sure, give them wins against North Carolina A&T and UConn, but outside of that, they will be underdogs in every game. If you take out the game against Old Dominion, they’ll be double-digit underdogs in their remaining 9 games. I can’t see them getting to 4 wins.

The QB-WR combo of Tyree Jackson and Anthony Johnson may be the best in G5. Overall, the Bulls return the 34th most production in the country and have a defense led by Khalil Hodge that could be one of the best in the MAC.

The motivation will be high for this team after winning 6 games last year, but being snubbed of a bowl berth. They are going up against the 6th easiest schedule in the country. Give me over 6.5 all day. 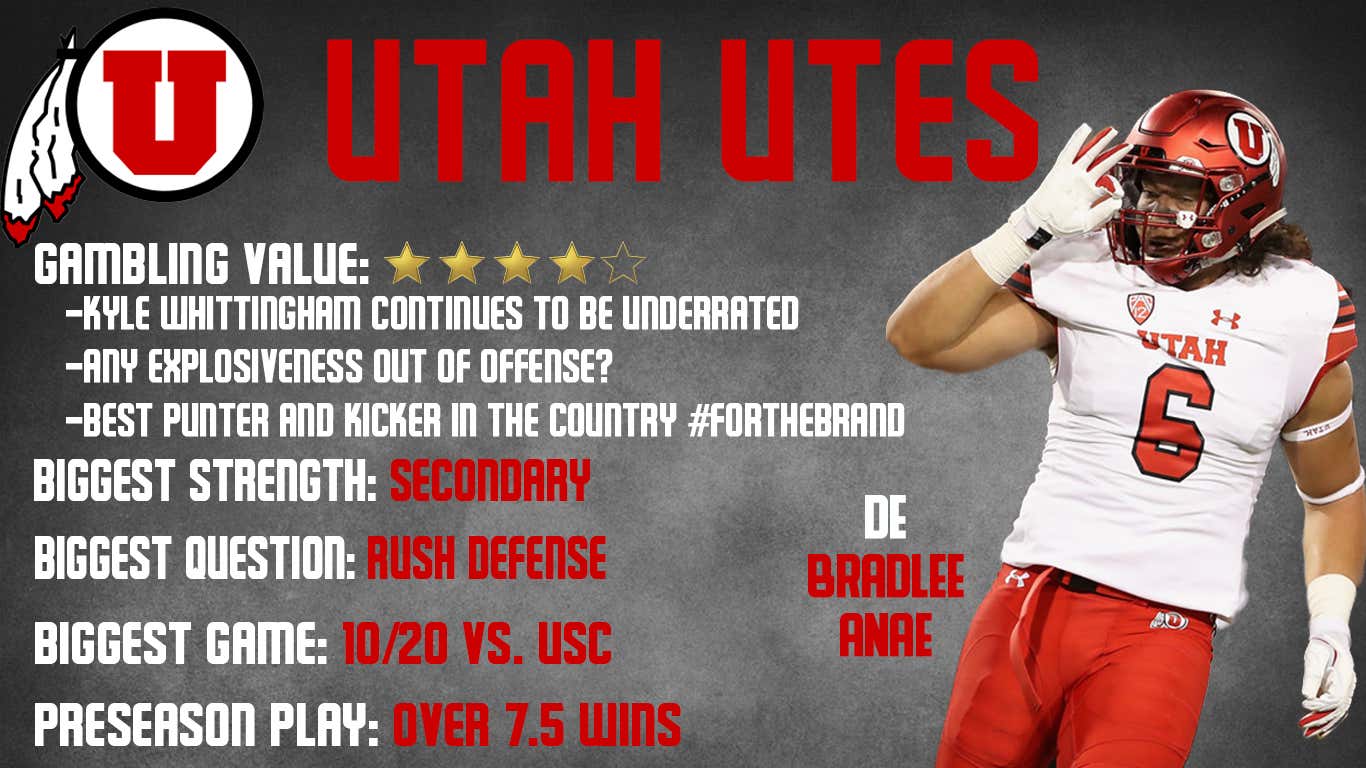 I am of the belief that Kyle Whittingham is one of the most underrated coaches in the country. He will be leading a Utah Utes team in 2018 that ranks 25th in S&P+ coming into the season. They have Washington, USC, Oregon, and Arizona coming to Salt Lake and could shock any of those 4 teams. The defense will be a top-20 unit again and QB Tyler Huntley combined with RB Zach Moss will produce a decent offense. Utah will threaten to win the Pac-12 South. 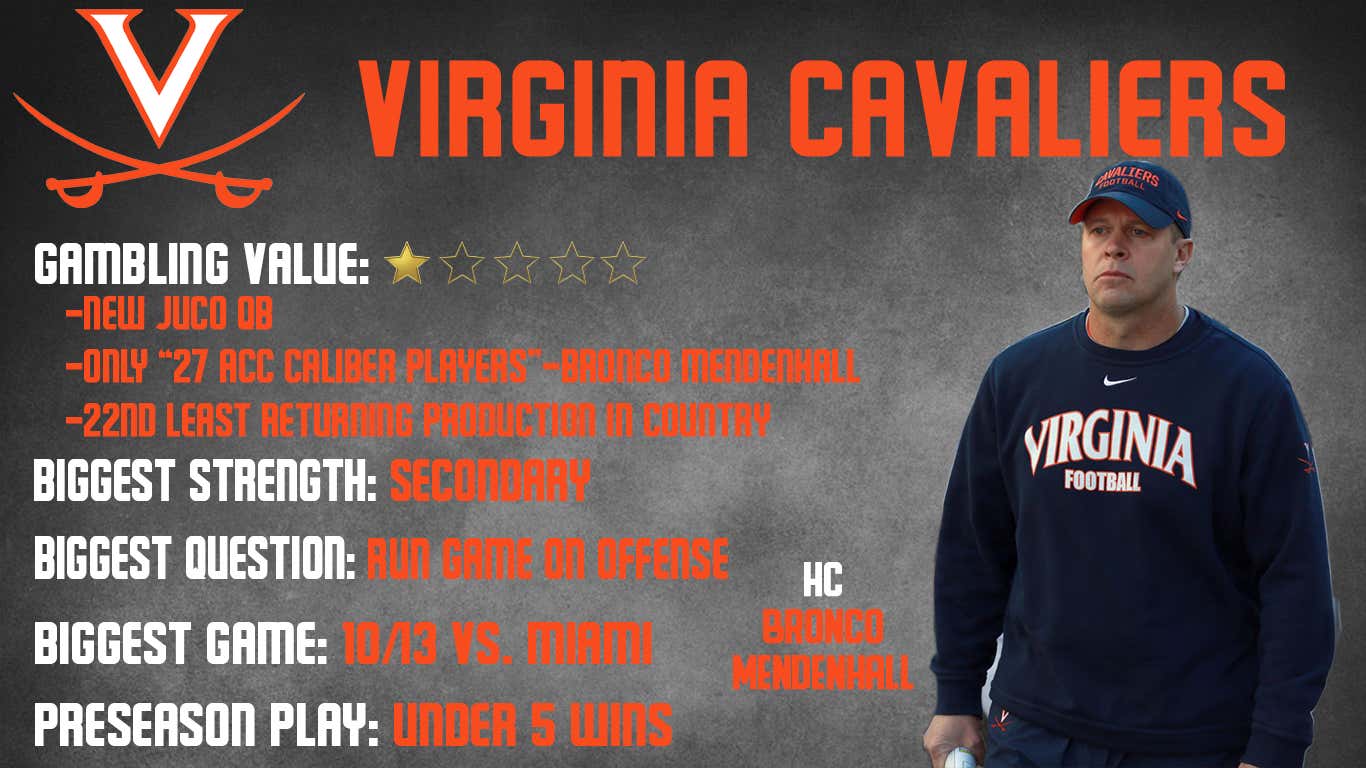 Back in July, Bronco Mendenhall said his team only has “27 ACC caliber players). They are bringing in a new JUCO QB that won’t have any help from a rushing attack that ranked 112th in success rate in 2017. There is a completely new offensive line. Overall, they return the 22nd least production in the country.

The OOC schedule features @ Indiana, vs. Ohio, Liberty, and Richmond. If you tell me they go 2-2 in those 4, I wouldn’t be shocked. Let’s say they go 3-1, where are the 3 other wins to get over 5 wins? They have away games @ Georgia Tech, Duke, Virginia Tech, and NC State. Louisville and Miami come to town as well. I count 6 losses there, putting them at 5-7 at best.

Oregon State is going to be the worst P5 team in the country. They will have growing pains with new head coach Jonathan Smith (have a more basic name, I dare you). The defense ranked 127th last year and the offense loses RB Ryan Nall and QB Seth Luton has some talent but is coming off a spine injury. They start the season with Ohio State, Southern Utah, and Nevada. I think they’ll go 1-2 in those 3. You think they win 2 more in the Pac-12? Nope.

Temple really turned it on in their last 8 games in 2017. Compared to their first 5, Temple averaged 1.9 YPP and 14 points more in their last 8 on offense. That was thanks to Frank Nutile at QB. He returns with an explosive offense. The defense projects to be 43rd in the nation according to S&P+. I love what Geoff Collins is doing in Philly and they’ll be going up against the 86th hardest schedule in the nation with South Florida and Cincinnati coming in. I think they are a dark horse to win the AAC as well.

The offense is attempting to transform into a power run game even with a graduating RB. The QB situation won’t help in any way either. The defense has depth questions across the board and will have to get used to Jeremy Pruitt’s philosophy.

When you take depth concerns (lots of transfers) into account, I can’t see them surviving a 5 game stretch starting in late September vs. Florida, @ Georgia, @ Auburn, Alabama, and @ South Carolina. To get to 6 wins they’ll have to finish 4-0 against Charlotte, Kentucky, Missouri, and Vanderbilt. I don’t see it happening.

The connection between Charlie Brewer and Denzel Mimms may be one of the best in the Big 12. Overall, they return the 4th most production in America. Last year’s pain will be this year’s experience. They return six linemen, five linebackers, and seven defensive backs on defense. Abilene Christian, UTSA, Duke, and Kansas are all likely wins to start the season. Then they’ll have to win 2/4 against Kansas State, Texas Tech, Iowa State, and Oklahoma State. I see it happening.

This team is going to be another god-awful G5 team. They return the 17th least production in the country from a team that ranked 129th in S&P+ in 2017. The youth movement will continue in San Jose this year. Outside of their first game against UC Davis, they’ll be in underdogs in every game.

Although they lose Baker Mayfield, I still think Oklahoma will have the best offense in the country led by Kyler Murray. The RPO with Murray and Rodney Andersen is going to be lethal. The defense was starting to turn it on at the end of the season before that brutal second half against Georgia. Murray will be able to throw the ball to the best Big 12 WR core of Marquise Hollywood Brown, Ceedee Brown, and Mykell Jones.

Oklahoma is the best team in the Big 12 and will be a favorite going into the Big 12 championship game. +100 will look like a steal come December.

We’ve already discussed Georgia, but their schedule sets up for them nicely to slide into the SEC Championship game. The line will be around -2/-3 against Alabama. +250 will look like a steal at that point.

I’ll talk more about these tomorrow, but here they are.

Tier 1 (I will let these ride until CFP):

Tier 2 (I will hedge throughout season):