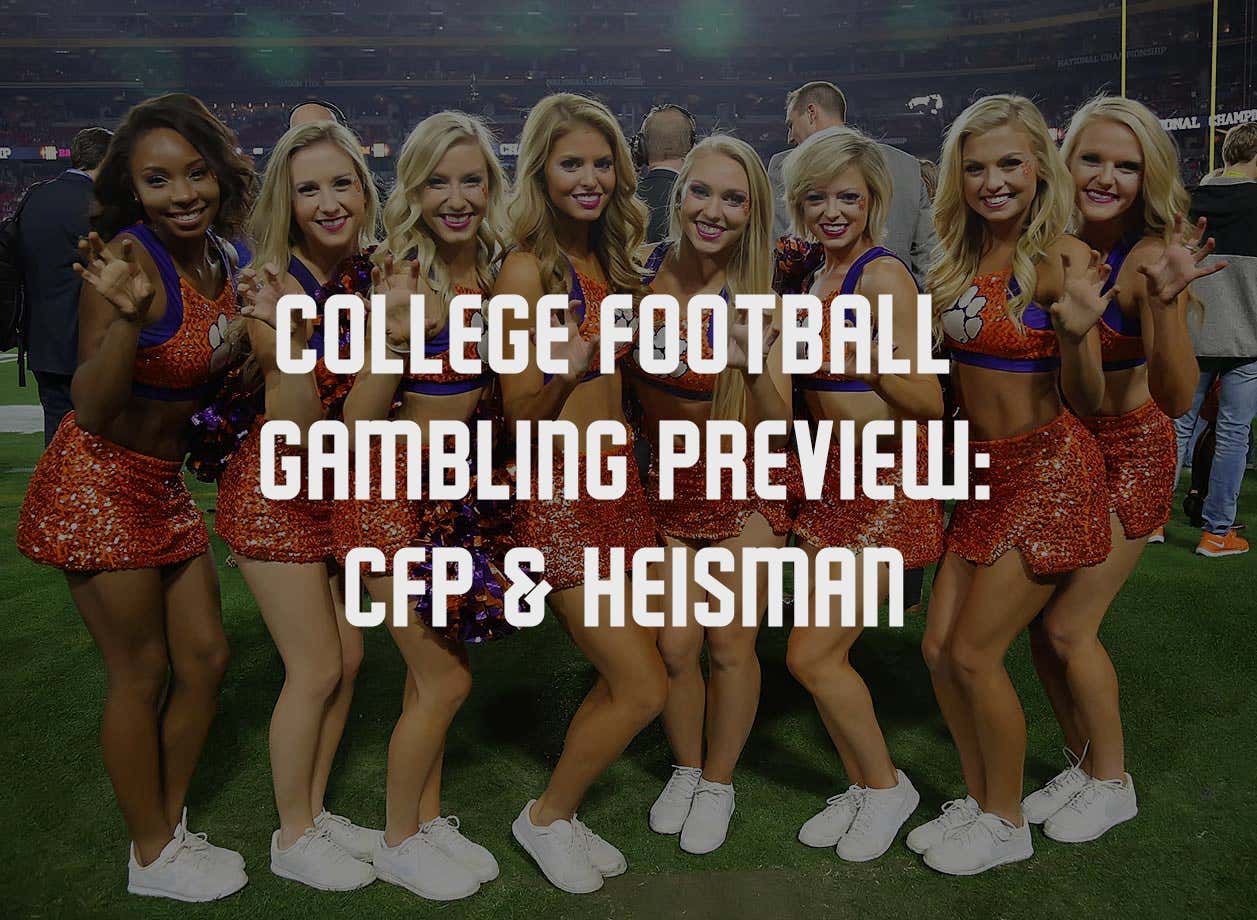 Before we get into week 1 talk, let’s go over college football playoff prediction:

Cotton Bowl: Ohio State over Georgia (EDIT: originally had Georgia over Ohio State. That was miswritten)

Give me Clemson ALL DAY. Best defense in that nation with Christian Wilkins, Austin Bryant, Dexter Lawerence, and Clein Ferell (ALL ON THE DEFENSIVE LINE!). The offense is full of explosive weapons: RB Travis Etienne (breakout year), WR Tee Higgins (next Clemson great at WR), Amari Rogers and Hunter Renfrow. True Freshman 5-star Trevor Lawerence will step in at QB week 2 or 3 and take the nation by storm with his beautiful, Sunshine from Remember The Titans, like hair: 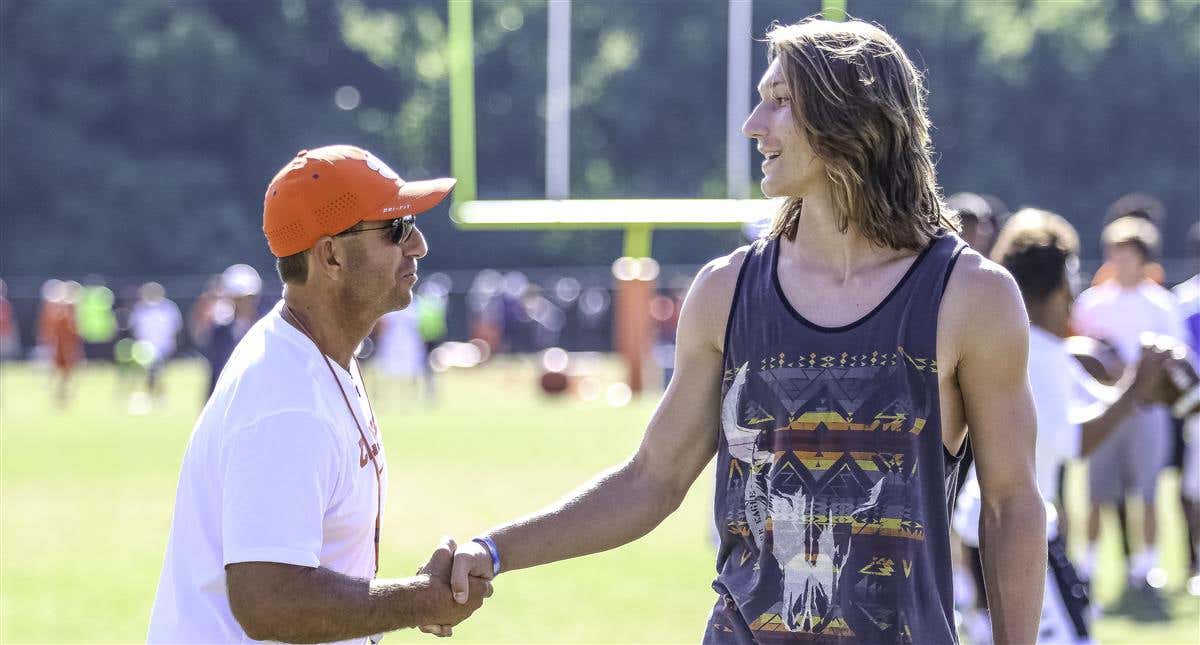 National Championship Plays (With Value, We Will Hedge):

Michigan State returns the most production in the country from a team that ranked in the top-20 in 2017. The defense finished in the top-5 and returns everybody. I love QB Brian Lewerke and RB LJ Scott, who will be operating an experienced line and great WR core. Their toughest games (Michigan and Ohio State) are at home, giving us great hedging spot.

Do I think Miami is going to win the national championship? No, but a team that returns top-50 production with a schedule that they’ll be favored in every single game in, I can’t pass up the 40/1 value.

The defense returns a bunch in the back 7, the replacements on the line are talented, and the offense features explosive options with WR Ahmmon Richards, RB Travis Homer, and WR Jeff Thomas. QB Malik Rosier was a good game manager until injuries ravaged the offense. His backup N’kosi Perry may be able to step up if Rosier goes down/isn’t playing well enough.

Throughout the season, I’ll pick spots to hedge with underdogs against the Canes. That will bring down the value to 40/1 or so heading into the ACC Championship Game against Clemson. We’ll take a big hedge in that situation.

Tough games against Oregon and USC are at home (Utah is on the road). Kevin Sumlin was great in his first years at Houston and Texas A&M. I could see them getting hot and ending up in the Pac-12 championship game as a serious CFP contender.

And oh yeah, they have this guy:

Here is the formula to win the Heisman:

Here are the current odds: 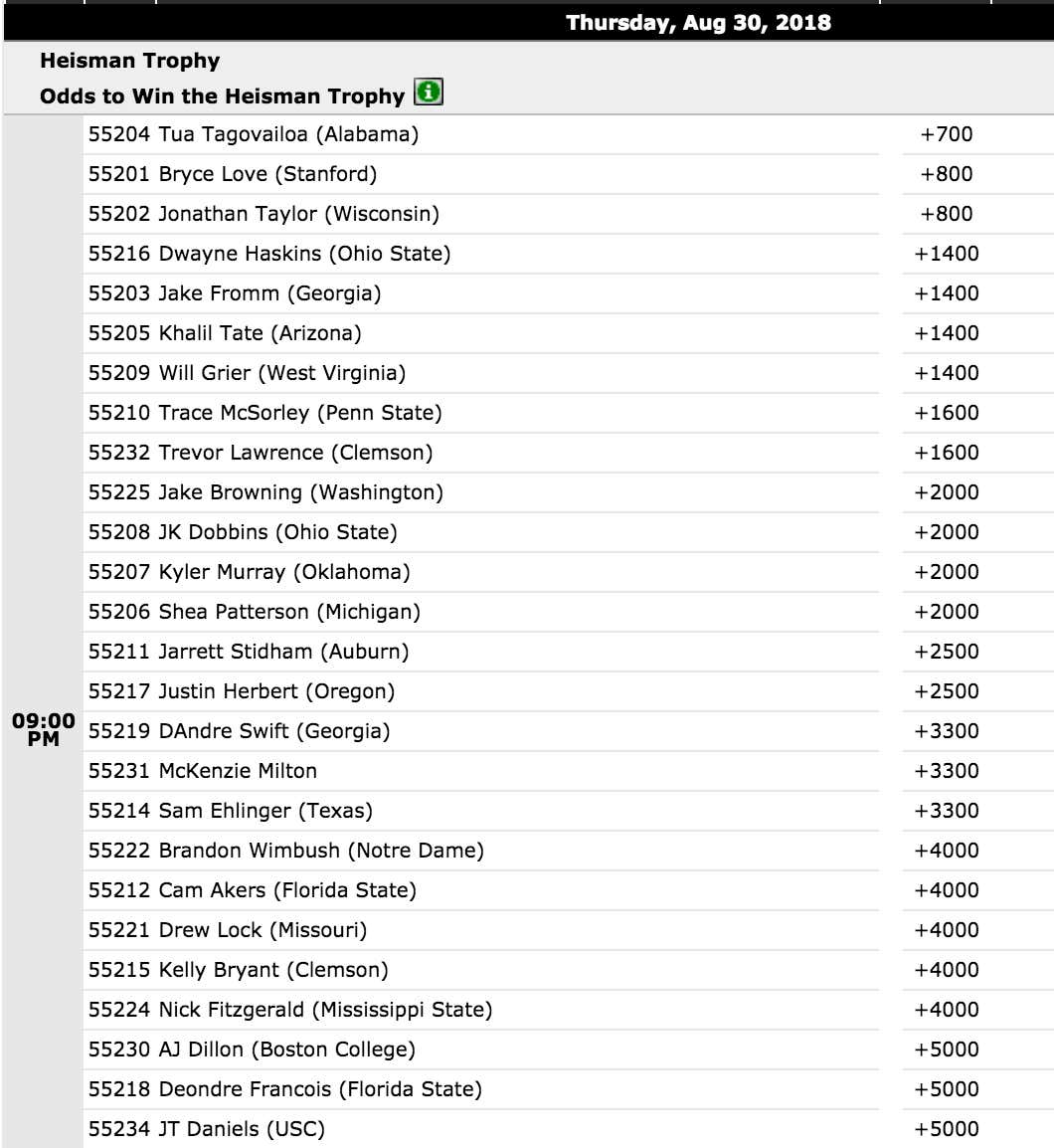 Can Bryce Love or Jonathan Taylor win the Heisman this year? Of course, but I don’t see it. The Heisman is a QB trophy. My pick is Dwayne Haskins at 14/1. What he did against Michigan last year was just a preview:

I can see the storyline now. Dwayne Haskins leads Ohio State to the Big 10 championship and the college football playoff. The same guy who once was a child, touring the Ohio State locker room with the same jersey he is wearing on Saturday’s this fall. People are going to fall in love with his storyline. He has the talent to put up the numbers as well as one of the best-supporting units in America.