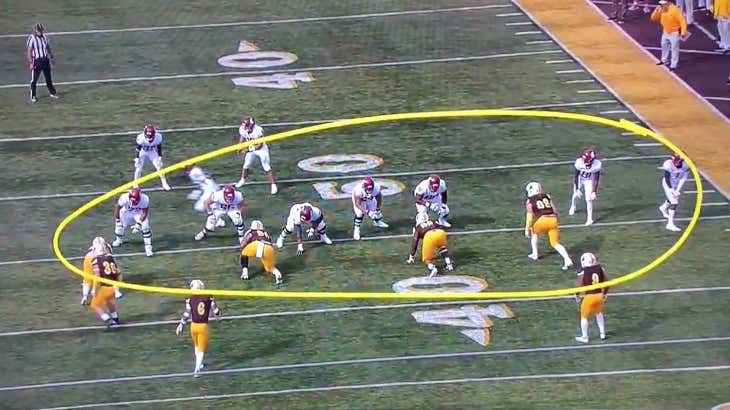 Mike Leach is back on his bullshit and I can’t think of anything better for college football.

Against Wyoming, Mike Leach trotted out a formation that football has never seen before:

All 5 linemen were where the receivers usually line up and a WR lined up with the football, where the center would usually be:

The QB still lined up in a shotgun formation behind the center, while the RB receives an angled snap from the receiver. The receiver, doesn’t snap it between his legs, which I didn’t know was legal, but I guess it is. This formation came from the mind of a Microsoft Engineer:

“Big Gulp” is an all-time nickname. Sounds like somebody that would work at Barstool. Hopefully, Mike Leach can explain to us where the nickname originated from.

The play went for just 6 yards, but actually may not be that bad of an idea. You are essentially forcing an entire defense into a telephone booth. In the age where you want to spread out the field, Mike Leach is shortening it. 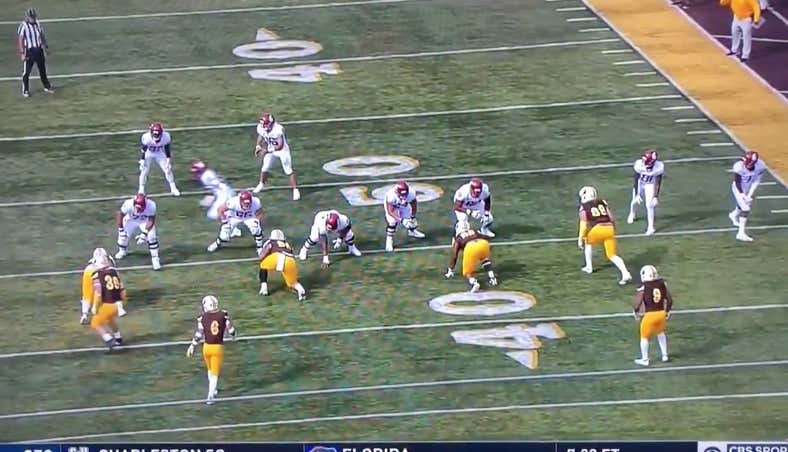 The key for this to work, outside of the players making their blocks, is to have a patient running back. Allow the blocks to take place, and then you can find open space. James Williams, the RB in these two plays, attacked the second he received the ball. On the second play, you could see how the play could’ve gone for a longer gain if the center got to the MLB quicker:

The hole is there if the center got to that LB in time. He seemed a bit confused when the ball was snapped, taking a step to the left and being late to get to the MLB. Although a bizarre look, the success comes down to the basics of football: knowing and blocking your assignments. If you have the right personnel, this play could work to perfection. In a college football landscape where LBs are getting smaller to adjust to the spread (especially in the Pac-12), forcing them into a box outside of the red zone forces them to be physical. If you are out there with a 4 WR/1 RB look, forcing the defense to put an extra DB to defend the classic spread and then quickly run two plays in the “Big Gulp” formation without allowing substitutions, you have quite the advantage if your OL can make the proper blocks and have a patient RB. You can, also, throw the ball here. The options are plentiful.

This is a creative and fun formation. I’m interested to see what other tricks Mike Leach has up his sleeve. Other programs that struggle with getting top talent should take notes from Mike Leach. Why try to be Alabama when you can confuse the other team with various, creative formations.

I’m glad we have Mike Leach in college football. His absurdity is good for the sport: