I had the pleasure of joining the Hi Haters show last night and we all learned some key information.

First I learned that when you take a dump on the airplane it does not just fly into the sky, its used like a porta potty.

I have been lied to my entire life.

I refused to shit or piss on any of my flights because no one deserves to be hit by my waste. 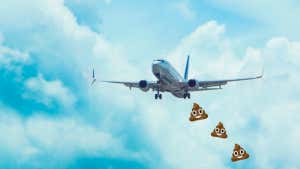 We had a caller that claimed he was an astrophysicist which was a lot to handle at first but he broke it down in terms I could understand.

You are not supposed to let out waste while flying, but some pilots are rebels and let it fly.

So when you let shit fly that high in the sky, it freezes and and sticks to the plane.

When you get closer to the landing spot it starts to heat up and becomes chocolate rain.

There is nothing worse that getting shit on by a bird -now just imagine a human.

This caller might be an actual killer because he knew way to much about what height you need to be at and was throwing out crazy stats on how to pierce someone with your shit. Why hire someone to kill your enemy when you can become the poop bandit?

According to this scientist all you need to do is take a hot air balloon, lean over the side and let it rip. If it hit someone from there it will go right through them like a bullet.

Long story short, make sure to take cover anytime a plane is flying over your head. Also credit to me that I spelt astrophysicist right on the first try.