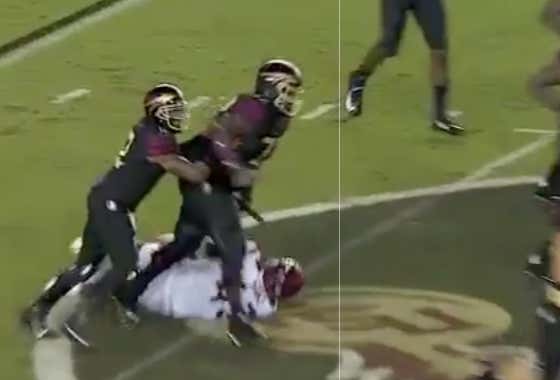 Monday night was not a great start to the Willie Taggart era. What do you do after scoring just 3 points and turning the ball over 5 times? MENTION THE FAKE INJURIES!

SOURCE-In Monday’s game between the two conference rivals, the home fans booed the Hokies on multiple occasions when one of their players was slow to get back up on his feet after a Florida State play.

When Taggart was asked if he thought it was intentional that players stayed down, thus slowing down attempts by the Seminoles to use a faster tempo, he said, “It happened too often so it’s hard not to.”

“Well it is what it is, I guess it’s part of football now,” Taggart said. “That’s all I can say.”

Some would think, wait a second, Willie, what offense are you talking about?

Does Willie have a point though? This was the most damning evidence:

As Taggart said, “I guess it’s a part of football now.” Here is Justin Fuente defending his team:

SOURCE-“I know this: Going into the game, we were severely concerned about our ability to handle the humidity and the weather, just coming from our climate to down there,” he said. “We certainly had some issues with it throughout the game. At halftime, numerous guys were in there getting IVs and getting treatment so they could finish out the game.”

In defense of the player that seemed to go down faking an injury, here he was a few plays before, keep an eye on #43, the second VT lineman from the bottom of the screen:

On Monday night, the temperature was around 75, but the humidity was at 100% at 5:15 PM, so cramps were happening without a doubt.

Accusing a player of faking an injury is a slippery slope. You have no idea what a player is feeling as you watch from your couch or in the stands. FSU fans started booing after this play, where two VT players collided, head to head:

Are their fake injuries in college football to slow down offenses? Yes. Did it happen in the FSU-VT game? Maybe. Does that change how poorly FSU played? No.