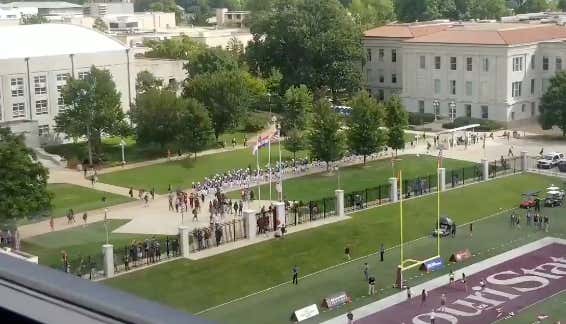 Due to the impending Tropical Storm Gordon, Missouri State had to move up their home opener to today at 11 AM.

Here we have a video of students walking to class, while the football team walks to their game:

Imagine the nervous Freshman rushing to get to class on time and bumping into the Missouri State OL? Would’ve been glorious.

SOURCE-Due to classes still being held, the Bears’ band isn’t even at the game

Talk about a bunch of NERDS. Missouri State’s opponent, Lincoln University Of Missouri, showed up with their band:

Meanwhile, Missouri State is pumping in fake band noise like the Atlanta Falcons:

I don’t know if there was a line out there for this game, but taking Missouri State would’ve been the lock of locks.