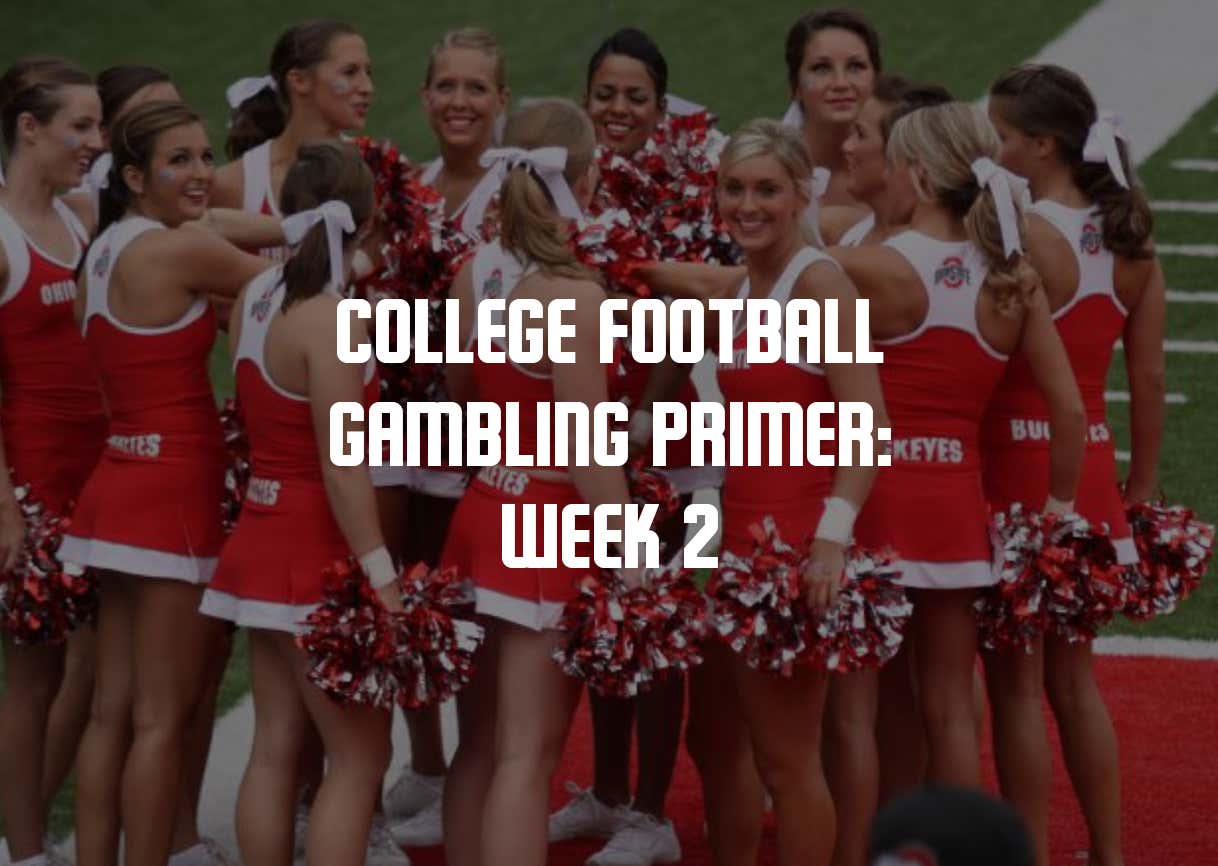 Old Row vs. Barstool. North vs. South. 5 (or so) picks every week. Civil War is back, baby. 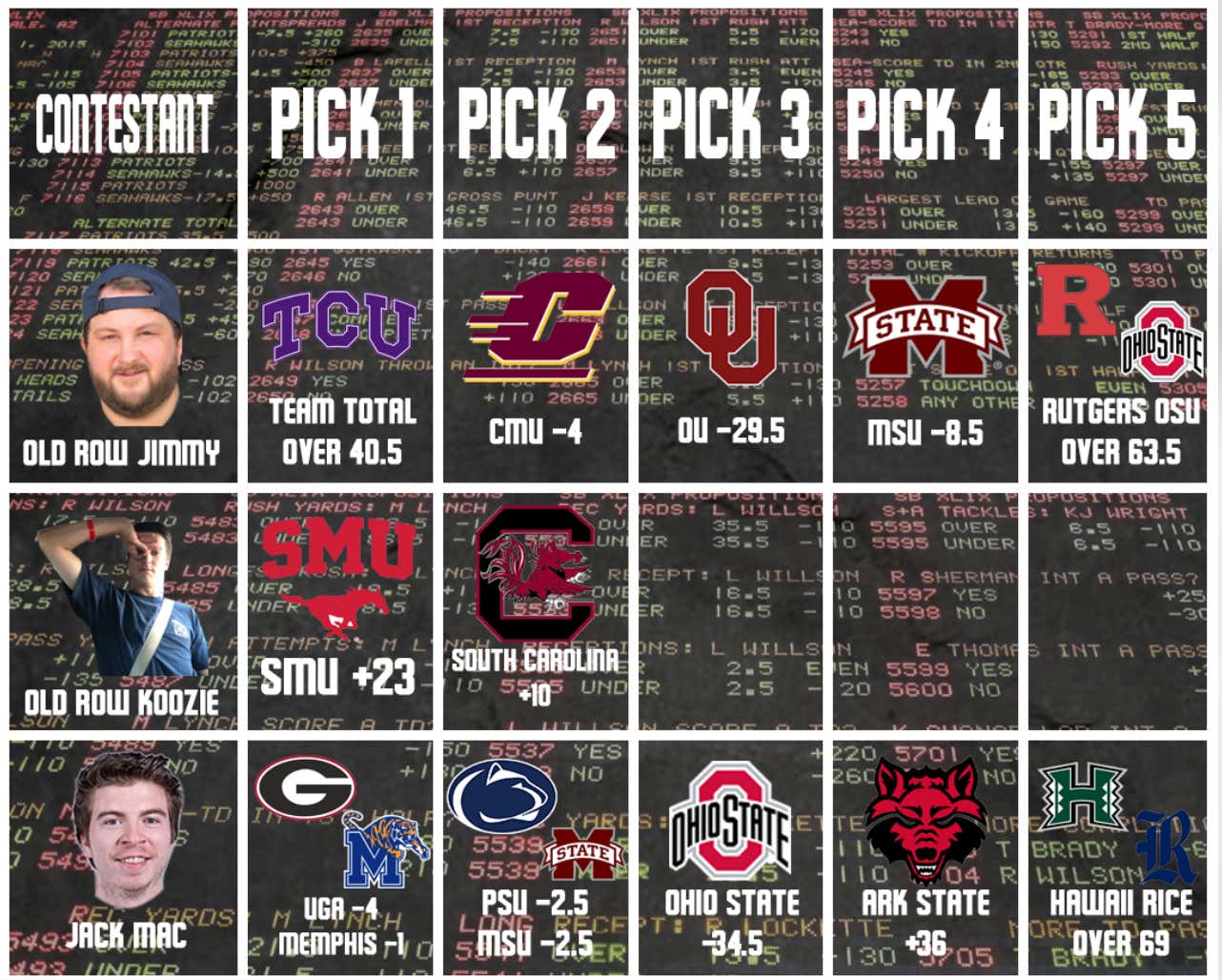 This one should (hopefully) be loads of fun. We’ve had a bit of trash talk:

Georgia has heard it loud and clear:

I would’ve been much more inclined to take South Carolina plus the points if they kept their mouth shut this week. This is the best South Carolina has matched up against Georgia in a few years and they could’ve caught them on not their best day on Saturday afternoon if they kept quiet. Instead, Georgia has heard the chirps and are going to come in with their A-game. Here’s the matchup:

Georgia has the advantage in every unit and the 18 and 19 ranking on offense/defense is not even close to their true potential. South Carolina is at an obvious disadvantage here, but that doesn’t mean they can’t pull off the upset. If they cause some turnovers and get the crowd into it early, Georgia will be on upset alert. Do not underestimate the impact Williams-Brice can have on this game:

Navy allowed Hawaii to put up 60+ on them last week and are going up against an incredibly similar offense this weekend. Memphis’ 22nd ranked unit may be able to put up 50-60 on Navy’s defense, which ranks 2nd to last in the entire nation! On top of all of this, Navy is coming into this game in an awful travel spot, coming back from Hawaii late Sunday. Last week, Memphis had Mercer, which took minimal game planning throughout fall camp. They’ve been prepping for the Navy triple-option all summer. Brady White is the next great AAC/Memphis QB. I expect a big victory for the Memphis Tigers here.

If the 75 Million Dollar Guaranteed Man Jimbo Fisher pulls an upset out of his hat in this game, they are going to have to build him a damn statue in College Station. Put the statue right next to Johnny and put a duffel bag between the two with stacks of cash coming out of it.

Can it happen, though? It’s possible:

Here’s the formula for A&M to pull off the victory: an early lead, special teams/defensive touchdown, and win the turnover margin by 2-3. If they can do that, I could see Clemson going down.

Ultimately, I am picking Clemson to pull the outright win. This will be a good test for them. Texas A&M’s defense ranks 26th in S&P+ and will pose problems for Kelly Bryant. Does he take full reigns of the QB job during this game or does he open up the door for a Trevor Lawrence appearance?

12 is too much for me to lay on Clemson, I lean A&M plus the points.

Pitt fans (not many of them) did NOT like that. He backtracked on that comment in a great example of “coach speak” this week:

Just one of the various storylines of the week to keep an eye on. Now for the game: I think we are getting good value on Penn State here. The OT victory against App State was a blessing in disguise for this Nittany Lion team. It was the wakeup call they needed early in the season. Coming in sleepy to a game against App State is better than coming in sleepy against Pittsburgh because with the talent on Narduzzi’s 2018 team, PSU would’ve gone down. There is still a major gap in terms of talent translating on the field for this game:

Saying this is a home game for Pittsburgh would be giving them too much credit. I wouldn’t be surprised if there are more Penn State fans at Heinz Field on Saturday. The defense dropped by from ranking 16th preseason in S&P+ to 78th this week, but I’d bet my life that unit does not stay in the lower half of defenses throughout the entire season. This defense will play better against Pittsburgh than it did against App State. The offense will do what it does best, score A LOT. FPI sees PSU winning this one by around 11 (that’s with home field factored in, which I wouldn’t) and S&P+ sees PSU winning by 9. I could see Pitt keeping this within a touchdown, so let’s tease this one down and pair it with Mississipi State (-8.5) who is going into Kansas State. We talked about my love for the Bulldogs throughout the CFB preview and this will be their first big victory of the season. Right now, I have them as a top-10 team. Their performance against Stephen F. Austin on Saturday was dominant and that was without Heisman candidate Nick Fitzgerald.

Kansas State, on the other hand, is coming off a performance where they barely beat South Dakota at home with just a 32% success rate on offense. On top of that, they allowed 6 scoring opportunities to South Dakota. This team isn’t ready for the attack Joe Moorhead is going to bring to the field in Manhattan. The reason I am not taking them straight up, but in a tease, is how great Bill Snyder has been as an underdog of more than 7 points at home. Since 2009, Wildcats are 35-19-1 ATS (65 percent), with 22 outright wins as an underdog. Still, I see Mississipi State winning this game, even if it’s only by 4-7 points. FEAR. THE. BELL.

I’m very interested to see how JT Daniels looks in his first true game as the starting QB of USC. The good news for the should be senior in high school is having your first conference road game be at Stanford ain’t tooooooo bad. The home field advantage for Stanford will be negligible and the environment won’t be too raucous. Can JT Daniels do enough to keep the Trojans in the game and let the defense do the rest?

I was very disappointed in Stanford last week. The offense put up just a 30% success rate and Bryce Love didn’t get over 30 yards on 18 carries!!!! The only reason they won against San Diego State was God blessing these jump balls from KJ Costello to JJ Arcega-Whiteside:

Guess who that isn’t completed against? If you said the USC defense, you sir, are correct.

I lean USC plus the points. Even though it is in Nerd Valley, California, this is still the first conference road game for an 18-year-old QB, which is why I only lean towards USC. The offensive line play brought some serious concern for me about this Stanford team against SDSU last week. Now, they have to go up a team that’s 10x as talented.

Here’s a stat: since Rutgers joined the Big Ten, Ohio State has outscored them 219-24.

Let that sink in for a second……two hundred nineteen to twenty-four!!!!!! Rutgers has been shut out by Ohio State in back-to-back games. They haven’t scored a point against Ohio State in almost 1000 days. Now, they come into the Horseshoe with a true freshman starting QB and without one of their top defensive options:

Here’s how I feel about Ohio State: they are on a mission. These players are very happy to put aside all the off the field drama and play in these games. They are at peace. They also want to deliver the message to everybody across America that they are not a team recovering from a massive scandal, but one of the best teams in the nation. Add that to the fact that this defense has something to prove after their performance on Saturday, allowing Oregon State to score 31 on them! 31!!!

I think we are going to have to add a section to this piece every week devoted strictly to how bad UConn is. This week, it’s only going to get worse:

UConn will allow 45+ again this week. Boise State has a potent offensive attack and their defense, which currently ranks 48th, is better than S&P+ has it at the moment (it projected as 17th in preseason). UConn put up 300+ yards in a wide open game against UCF last week, but that was against a defense that ranks in the bottom 50 in the nation.

This is an awful travel situation for UConn. Coming to play in the altitude of Boise along with a 10:45 PM kick? Brutal. UConn HC Randy Edsall hasn’t been focused solely on this game, either, as he had to go to court this week to defend himself in a nepotism case involving the hiring of his son:

S&P+ has Boise State winning this one by 46, while FPI has them winning by 31. The lookahead for Boise scares me a bit (Oklahoma State on road next week), but I’m still going to sit down on the turnover throne and take the Broncos:

Since 2008, when Alabama opens with a neutral site game, they are 1-7 ATS in week 2. Why does that stat have any meaning? Look to Nick Saban. He likes to open against a solid P5 team and then take on a mediocre/good G5 team in week 2 at home. He crushes the soul of his opponent in week 1, but likes to take it easy in week 2. He wants to end somebody like Bobby Petrino’s life but understands the struggles of a Blake Andersen at Arkansas State. He’ll call off the dogs early in week 2. In the one game that he did cover the spread, it was by just one point against Western Kentucky in 2015.

Here’s another stat to back up this trend: Alabama is 5-14 ATS when favored by 28.5 or more points against nonconference opponents.

We rode Fresno State in this situation last year, let’s ride with Arkansas State this year. The Red Wolves were one of our favorite win total plays and QB Justice Hansen will have his top-25 S&P+ offense ready to go on Saturday to put up just enough points to help us cover this spread.

Cole McDonald and the Hawai’i Rainbow Warriors are the most fun team to watch in college football at the moment.

Outside of the weird hair (which I kind of dig), McDonald is a damn man rocket: 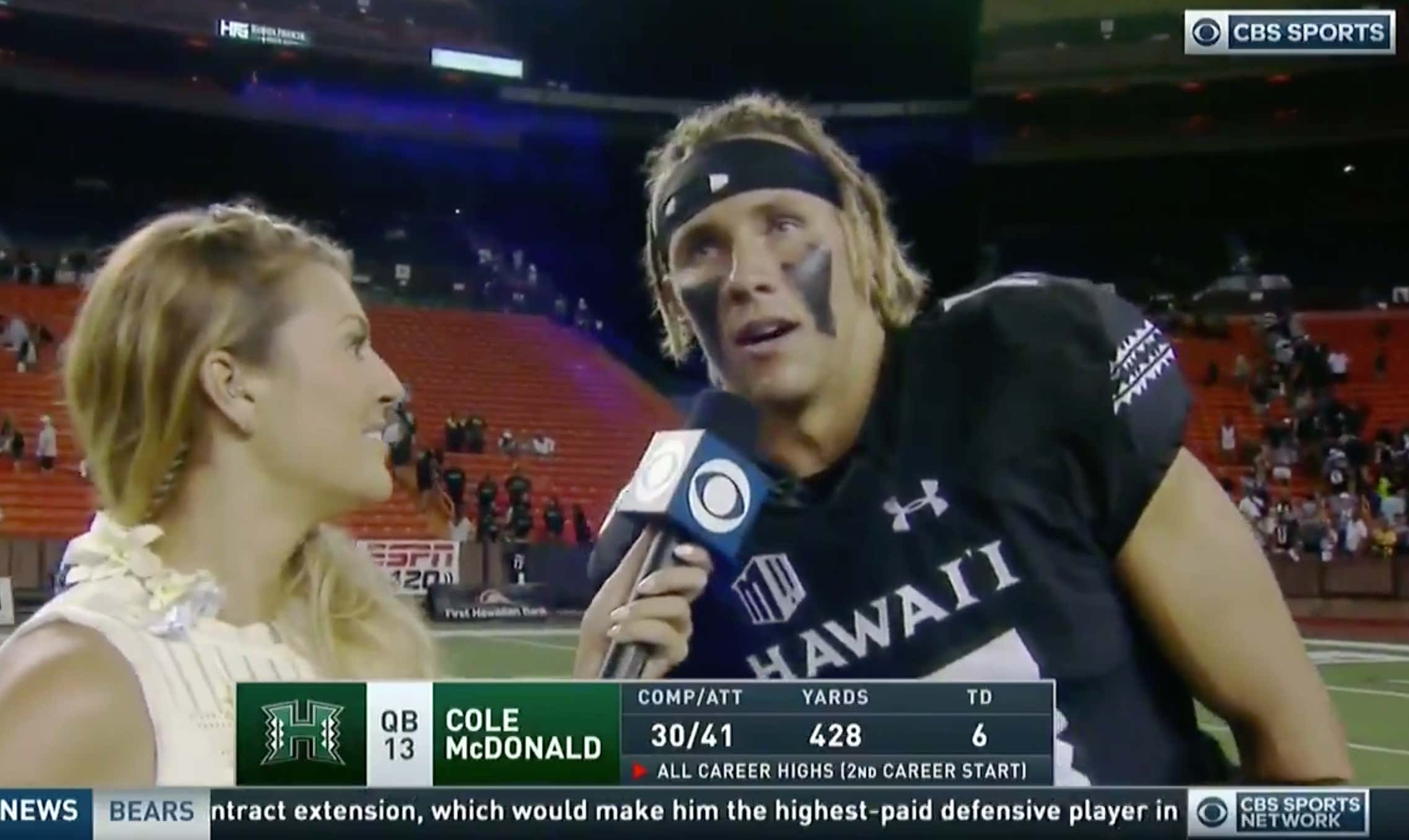 There are going to be a lot of points in this game. I wouldn’t be surprised if Hawaii got to 60 by themselves. Rice allowed 28 to damn Prarie View A&M in week 1 and then 45 to Houston last week. They’ll be able to score on this god awful Hawaii defense. S&P+ sees 85 points here, I see around 90. Give me the over all day.

When you clicked on this article, I bet you weren’t expecting a Sacramento State-San Diego State play, but when there’s an edge, you ride with it.

San Diego State is in a brutal sandwich game here, off of Stanford and before Arizona State. Sacramento State is a very good FCS team that is coming into this game ready to shock the Aztecs. According to Sagarin Ratings (which is a formula for both FCS & FBS teams), Sacramento State ranks 154th in the nation, the 35th best in FCS and puts the spread at -19. Sacremento State is fresh off a 55-7 win, where their starters didn’t even play in the second half, plus they get their head coach back for this game.

This line isn’t out anywhere except 5 Dimes at the moment but will be up at all books in the morning. Hop on it when you wake up tomorrow and ride this solid FCS team in a great spot.