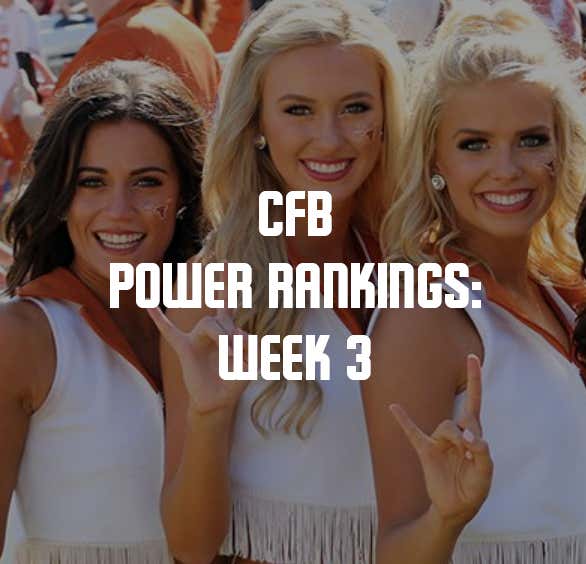 Let’s get after it and do some POWER rankings. This is not an AP Top 25 or a ranking of who is going to get into the CFP. Instead, this is a look at who I believe is the best teams 1-130. For example, last year I saw Ohio State, Penn State, and Wisconsin as better teams at the end of the season than Oklahoma (yes, I know they beat OSU) and Clemson. Did they have the same resumes as those two playoff teams? No, that’s why they didn’t get in, but if they played a game on January 15th, I would’ve put OSU, PSU, and Wisco as favorites over Clemson and Oklahoma.

The number next to each team is their power rating. It’s my way of comparing two teams. For example, I have Oklahoma State at 83 and Boise State at 80. I’d set the line at Oklahoma State -6 (taking home field advantage into account), while the line right now is at -2.5, so we may have value on the Okie’s this weekend (the rating does not account for everything, such as travel situations, matchup advantages, etc.).

These are the elite teams in my mind right now. Ohio State and Alabama both have tests this weekend where we will learn more about both teams. Georgia passed theirs in flying colors, while Clemson struggled a bit with Texas A&M. These would be my 4 CFP picks at the moment.

The loss of RB Rodney Anderson for Oklahoma is big. Auburn is a team we’ll learn a lot more about on Saturday against LSU. I still believe in Washington even after their loss to Auburn, a game they should’ve won. Notre Dame’s line struggled this past weekend against Ball State, but that could’ve been for a bunch of reasons (motivation levels must’ve been low after Michigan game).

I LOVE Mississippi State and think putting some money down on them 50/1 to win the CFP is wise. Another bet I like: Michigan 33/1. Do not forget about this team. They had a post-game win expectancy of 57.2% against Notre Dame (that stat takes into account how you performed on the field and compares it to other teams in the past who performed similarly and how often they have won). Their trip to Michigan State looks less and less daunting, while they get Penn State & Wisconsin at home. They could easily head into their game against Ohio State 10-1 with the chance to make it to the B1G Championship game.

Boise State’s been impressive, can they show up against a top-teir P5 school on Saturday? A&M had a post-game winning expectancy of 60% against Clemson!!!  Next Friday’s FAU @ UCF should be a lot of fun. LSU gets Auburn this week. 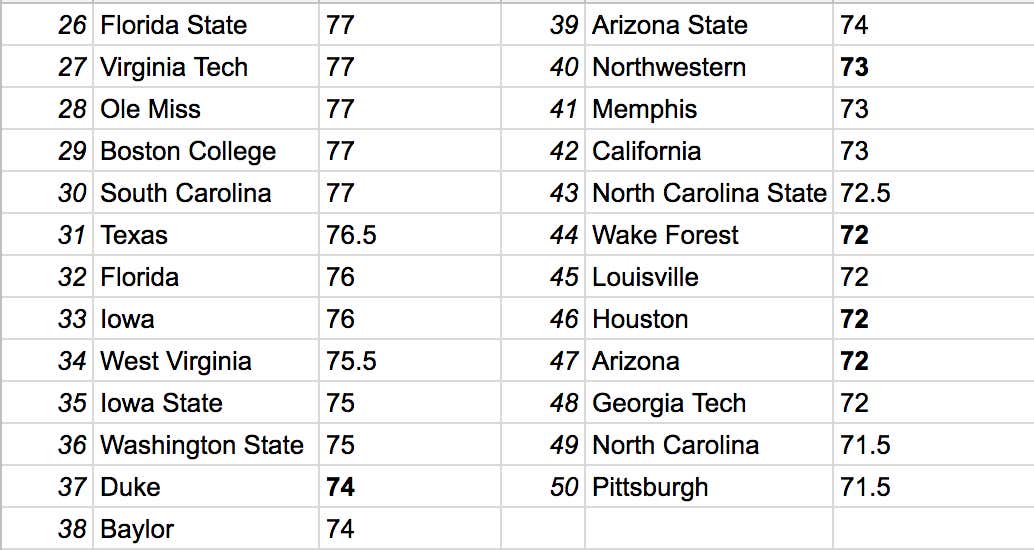 I was excited to see how West Virginia looked against NC State, unfortunately, that game has been canceled. Duke going to Baylor should be fun, Duke is without their top DB and starting QB. How does Arizona State look against SDSU after one of their biggest wins in years? 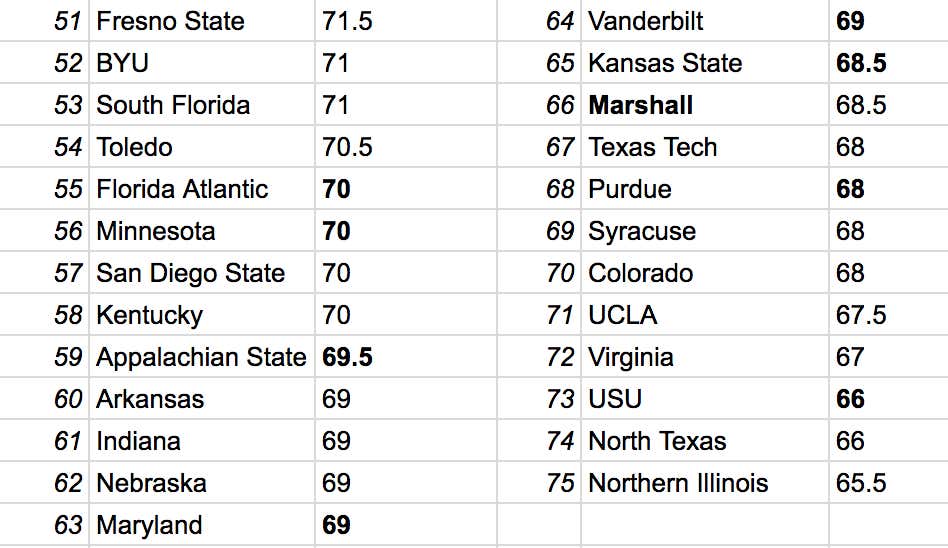 How does Arkansas bounce back from a disgusting loss against Colorado State? North Texas is no joke and could shock the Razorbacks if they allow them to stay in the game. I was impressed with Nebraska in their first game. They had a win expectancy of 93% according to the stats. Fresno State (51) @ UCLA (71) will be a test for both teams. Can Chip Kelly’s defense slow down Fresno State’s offense? We could see a lot of points in that one. I’m excited to see Syracuse (69) go up against Florida State (26) this weekend. 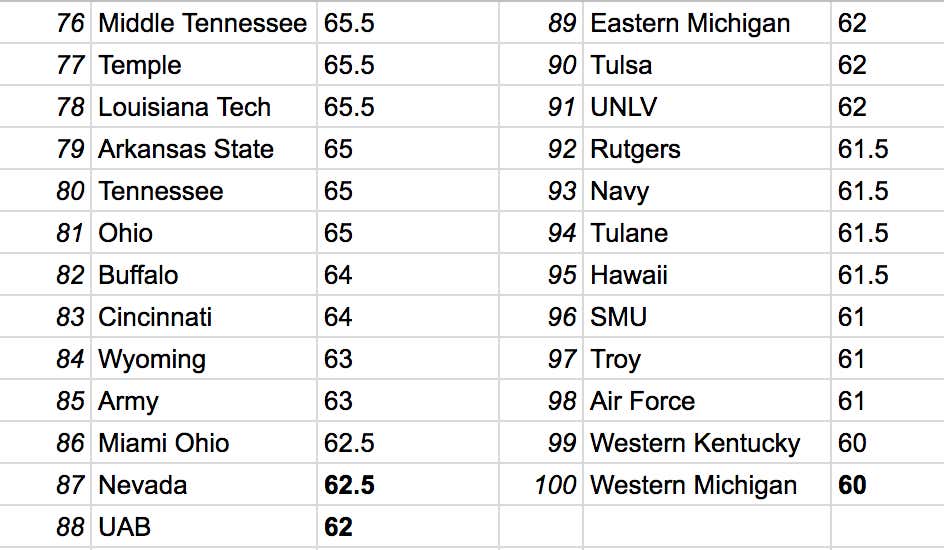 Buffalo had a big victory over Temple on Saturday, now go up against Eastern Michigan at home in a big #MACtion game. Hawaii continues to impress. I was shocked at how bad UAB looked against Coastal Carolina, their game against Tulane this weekend should be a good data point to see if the game on the aqua blue turf in Myrtle Beach was an outlier or a true showing of their team. 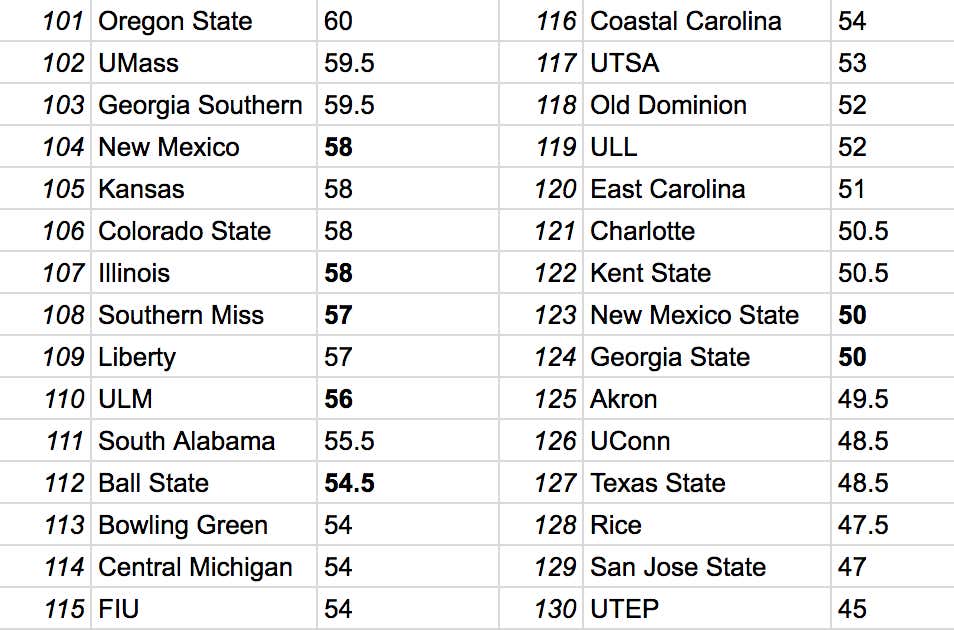 Rutgers (92) takes on Kansas (105) this week in one of the most disgusting P5 games in the history of college football. Newcomer Liberty struggled with Army after a dominating win against ODU in their first game as an FBS team. I don’t think I can put UConn, Texas State, Rice, San Jose State, and UTEP any lower, but I think I may have to if they continue to play this bad.

Biggest Discrepancies In Vegas vs. My Numbers:

Breaking: Vegas is smarter than me. However, I do start my week look at what I would set the line at compared to what Vegas has it at. Here are some current discrepancies, which may mean I have an edge on the market or that my number is wrong (the market is the best indicator for this and I compare my numbers to the closing numbers every week and make adjustments while looking at the box score of every game).

Oklahoma (-18 vs. -14 JMPR) @ Iowa State: This is a revenge game for Oklahoma after last season. Iowa State’s offense put up just 4 points last Saturday. Don’t think I will be touching this one.

Georgia Tech (-4) @ Pitt (-2.5 JMPR): Handling the triple option after a demoralizing rivalry defeat will be tough for Pittsburgh. Still, Georgia Tech just lost their starting RB for the season and QB Taquon Marshall may not play in this one.

Tulane (-4) @ UAB (-3.5 JMPR): We talked UAB above. I think this is a bit of an overreaction to UAB’s loss to Coastal Carolina. I’ll be looking to take the Blazers on Saturday.

Georgia Southern @ Clemson (-33 vs. -38 JMPR): A decent amount of respect for Georgia Southern here. The line most likely accounts for Clemson coming off a big win @ Texas A&M and having to go up against a triple option team in the rain on Saturday.

UMass (-2.5 JMPR) @ FIU (-4): May be value here with UMass. I feel I have this game rated correctly. They had a tough loss against Georgia Southern last week, but they have a very good secondary and UMass is not equipped to stop the triple-option.

Akron @ Northwestern (-21 vs. -26.5 JMPR): Very low on Akron. This could be a spot where we bet on Northwestern in a bounce back situation against a terrible team.

Arizona State (-5 vs. -1 JMPR) @ SDSU: This could be a great weekend to bet SDSU. Arizona State is coming off their biggest win in a few years. They are overvalued by the public. Now they have to get up for an away game against a G5 opponent. These are two good defenses and SDSU will be with a new starting QB. I’ll definitely be looking to play the under and may get down on the Aztecs +5.

Temple @ Maryland (-16 vs. -6.5 JMPR): I was a big believer in Temple coming into this season, but they’ve disappointed (loss vs. Nova & Buffalo). I probably have them too high, I still think they are not as bad as they’ve shown and Maryland is being overrated because of the Texas win.

This smells a lot like the Alabama @ Vanderbilt game last year. I’ll be looking to take ND this weekend.

Western Kentucky @ Louisville (-23 vs. -15 JMPR): I have WKU too high. Probably should bring them down 3-4 points, which would make this -19 Louisville. I still don’t think they are as bad as a loss to Maine says they are. They have a 63% win expectancy in that game and put up a 35% success rate against Wisconsin and had 4 scoring opportunities. There may be value with the Hilltoppers here.