About 35,000 people, so far, have signed a petition asking LSU to release Mike the Tiger and permanently stop having a live tiger mascot.

“We believe that animals shouldn’t be used as entertainment, they aren’t here for our amusement,” said Rebecca Gerber of Care2, a California-based social media operation with 40 million members. Care2 is sponsoring the effort that began two weeks ago. 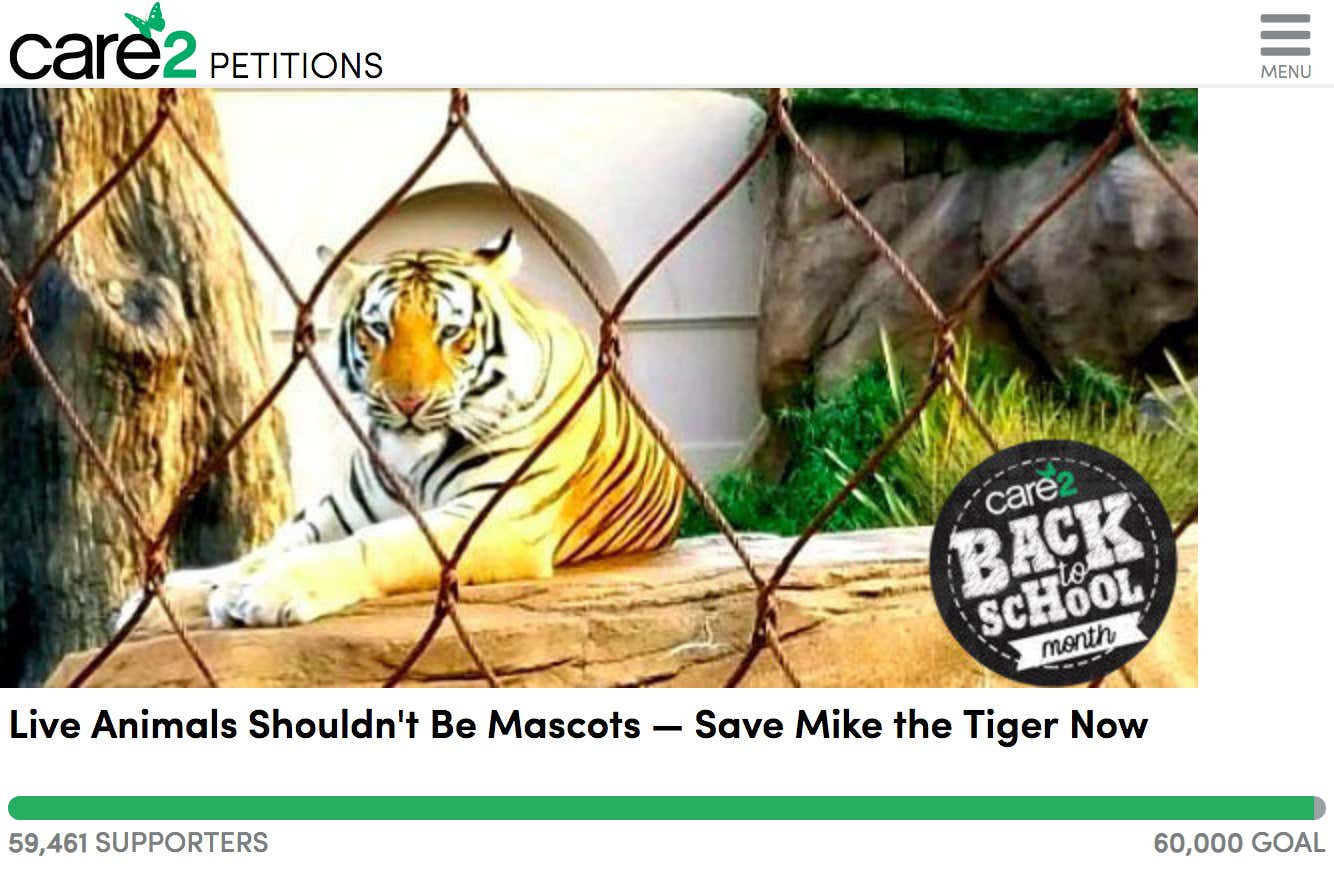 This isn’t anything new. Mike The Tiger’s position with LSU has been brought into question for a few years now. Does it make sense? A little, but if you are going to pick on an animal being mistreated in captivity, Mike The Tiger is not your cause. He lives in a $3.7 million palace:

SOURCE-Mike the Tiger, a famed live Bengal Tiger that serves as the graphic image of all LSU Athletics teams, resides between Tiger Stadium and the Pete Maravich Assembly Center. In 2005, a $3.7 million 15,000-square foot environment was created during the reign of Mike V that included lush planting, a live oak tree, a waterfall and a stream evolving from a rocky backdrop overflowing with plants and trees.

At a cost of approximately $950,000, the 2017 project was fully funded through the Tiger Athletic Foundation. Many of the enhancements were made possible through a generous donation from Kelly and Harper Spears to TAF. Additionally, funding from supporters of TAF’s Mike the Tiger Brick Program helped cover cost of this project and future maintenance of the habitat. These donations continue to be a testament to the love the LSU family has for our live Tiger mascot, Mike.

Would it be better for Mike The Tiger to be in the wild? You could make that argument, but there are thousands of Tigers in Zoo’s across the world treated like complete garbage compared to Mike. Also, Mike was rescued:

The tiger announced early Monday as LSU’s new mascot, Mike VII, was something of child star – taking photos in the laps of tourists as a cub.

But as is all too often the case, when the petting tiger got too big, its owners got rid of him, Jeremy Hargett told The Advocate Monday.

Hargett and his wife, owners of Wild at Heart Wildlife Center, took over the home of Mike VII in December after Florida authorities alleged a wide range of abuses under the previous owner. Wild at Heart donated the 11-month-old cat, previously named Harvey, to LSU, which released him as Mike VII into a million dollar habitat across the street from Tiger Stadium.

Luckily for Harvey, when his career of modeling with tourists was over, the previous owner took the three-month-old back shortly before Wild at Heart took control of Animal Adventures wildlife park. Often petting cubs end up in tiny enclosures and are used as marketing gimmicks. Or they’re killed.

I understand the petition, but I also think there are much worse things you can petition/protest about out there when it comes to Tigers. One of the main points of the petition “is that having a wild animal on campus as a tourist attraction makes it easier for people to accept killing animals for consumer trifles.” That’s fair, but to counter that: the Tiger is celebrated at LSU. LSU kids grow up loving the Tiger. Is it more likely they think Tiger’s should be abused or loved when they get older? Especially when they heard this voice: