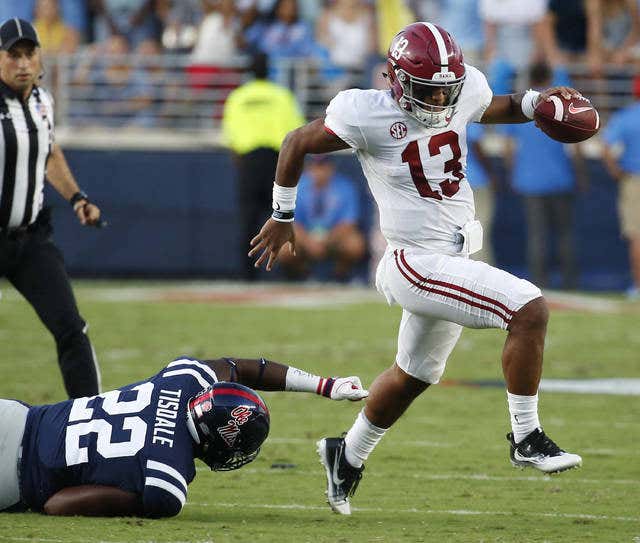 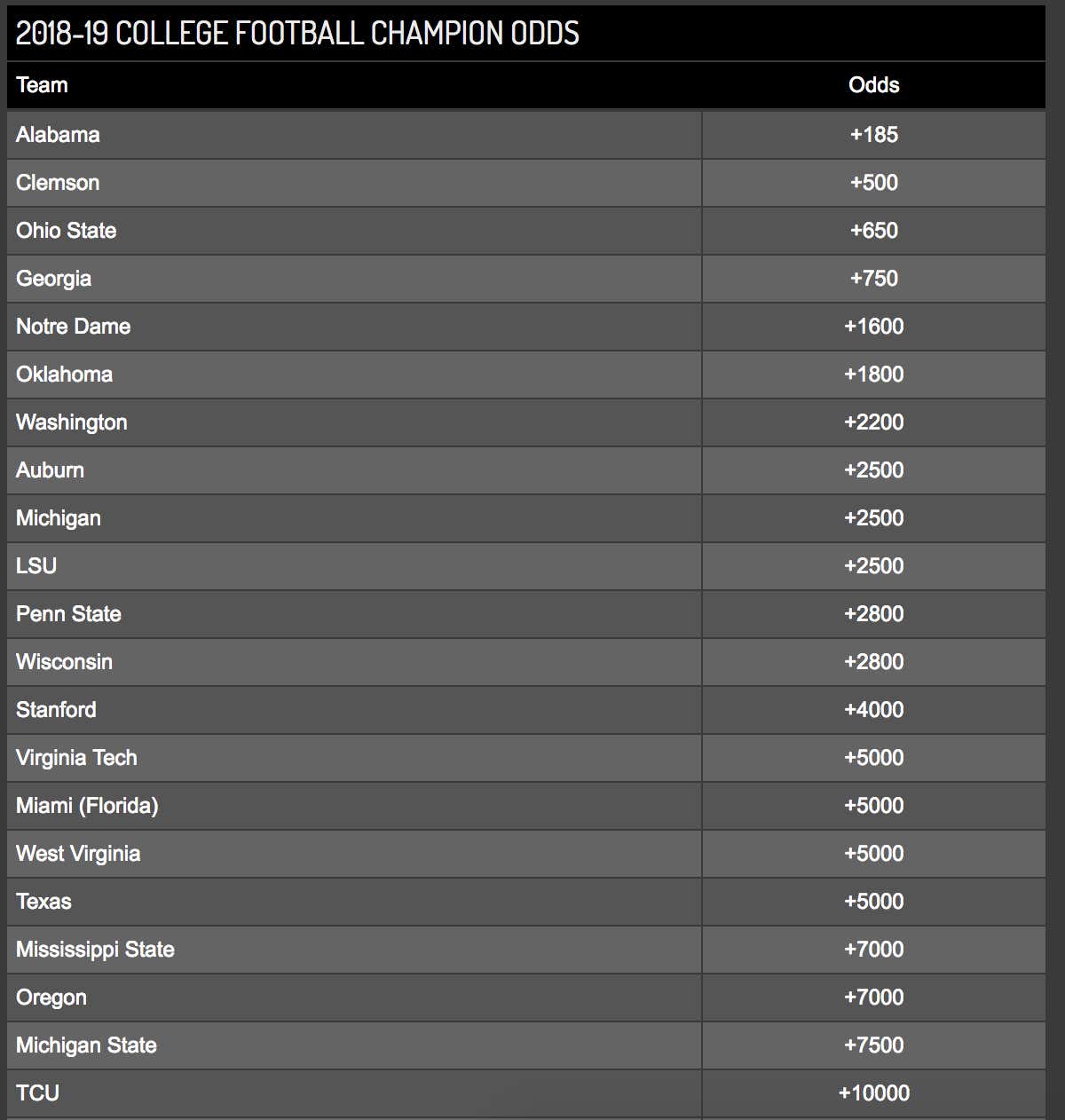 The good news is they get all three of these opponents at home.

Michigan 33/1 –> 25/1: Don’t forget about Michigan. If they find themselves 10-1 going into Ohio State in November, they will (most likely) be playing for a CFP spot.

Texas 90/1 —> 50/1: All hell would have to break loose for Texas to find themselves in the CFP. Is that possible? Of course, it’s happened before.

Wisconsin 12/1 —> 28/1: After a 24-21 loss to BYU, Wisconsin may be a dead man walking. Should you completely write them off? Of course not, if they win out in the Big Ten, including a convincing victory against OSU in the B1G Championship, they could find a backdoor into the CFP.

Auburn 14/1 —> 25/1: If Auburn wins out, they will be in the CFP (assuming LSU suffers 2 losses). I don’t see the committee leaving out an SEC champion with 1 loss and a victory over Washington. 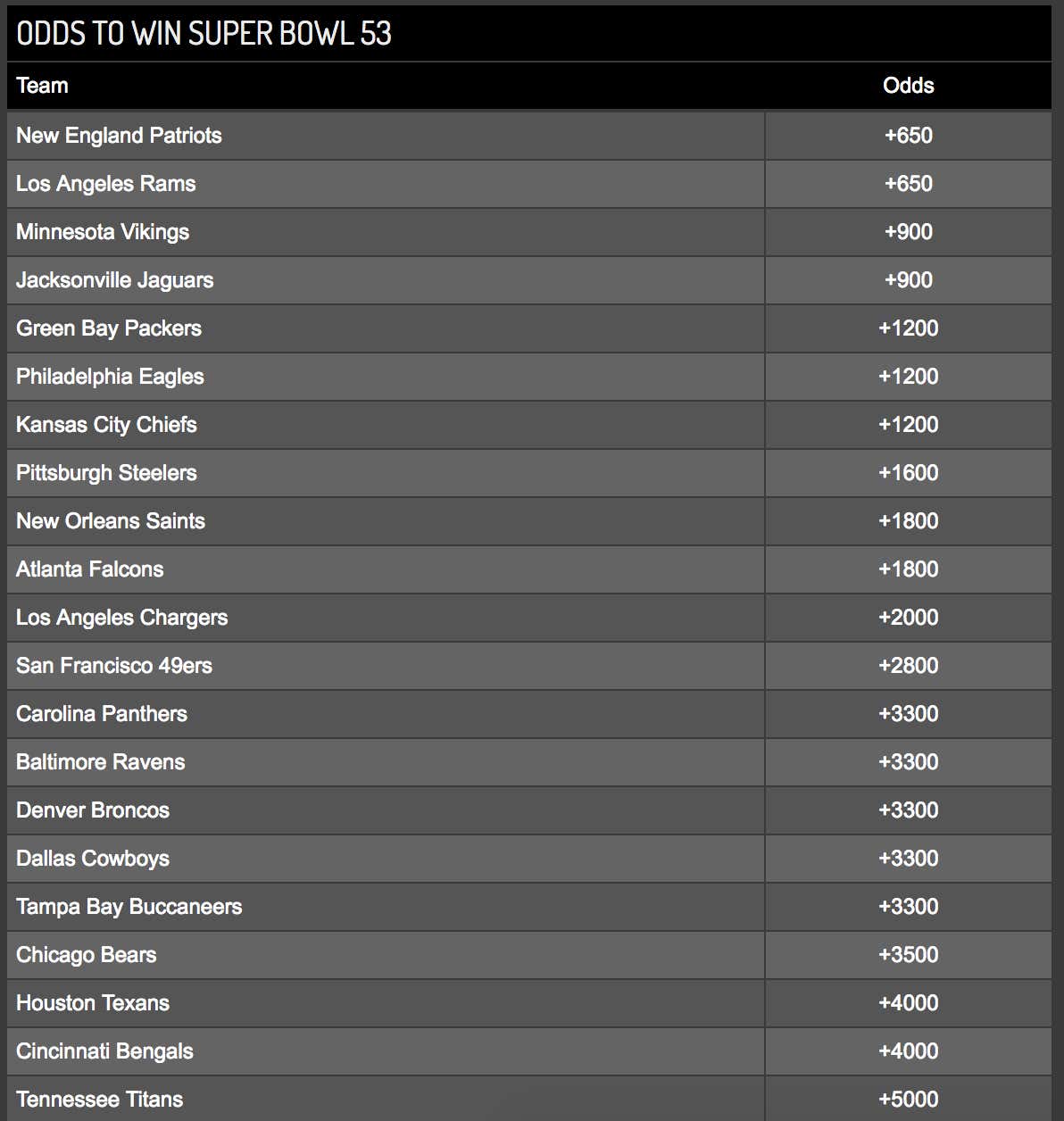 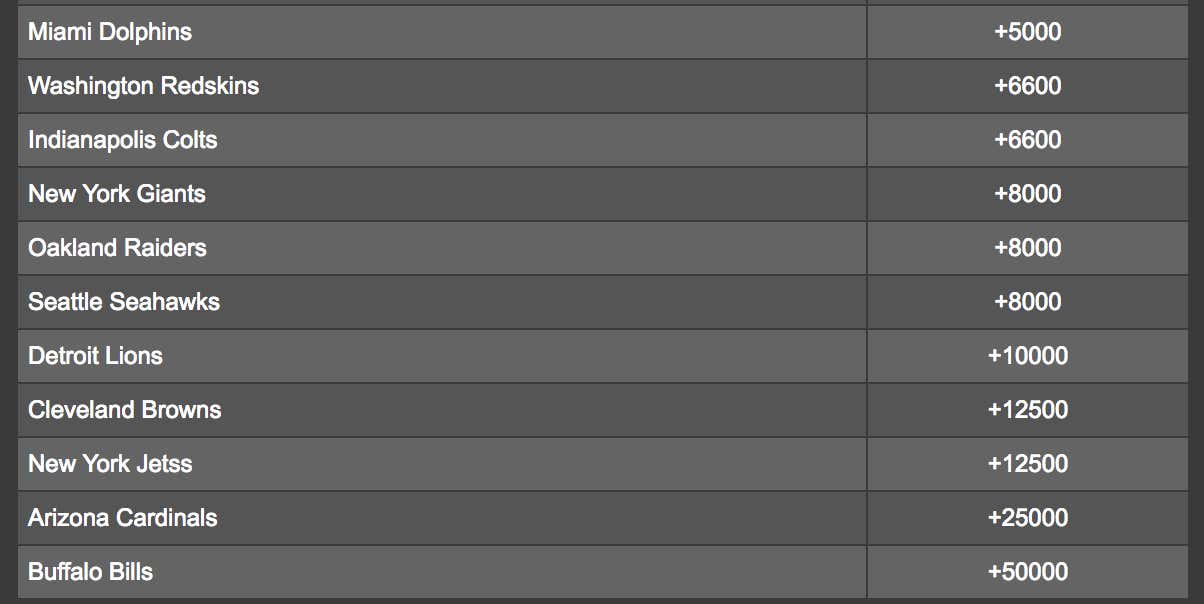 Jacksonville Jaguars 14/1 –> 9/1: After taking down the Patriots, the Jaguars have entered the top 4. We’ve seen this happen before with the Patriots. Lose a game early in the season to an upstart AFC team, the media overreacts, and then Bill & Tom go on a run.

Pittsburgh Steelers 12/1 —> 16/1: Although, it feels like the Steelers feel more and more like a circus every second, Vegas still remains relatively high on them.

Washington Redskins 40/1 —> 66/1: After starting the season 100/1 and skyrocketing to 40/1 following a road victory in Arizona, the Redskins took a step backward against the Colts this weekend. The good news for the Redskins is the NFC East looks less and less talented by the week. 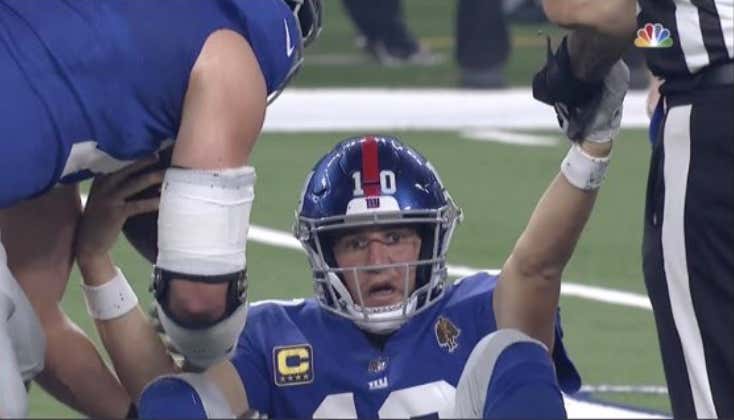 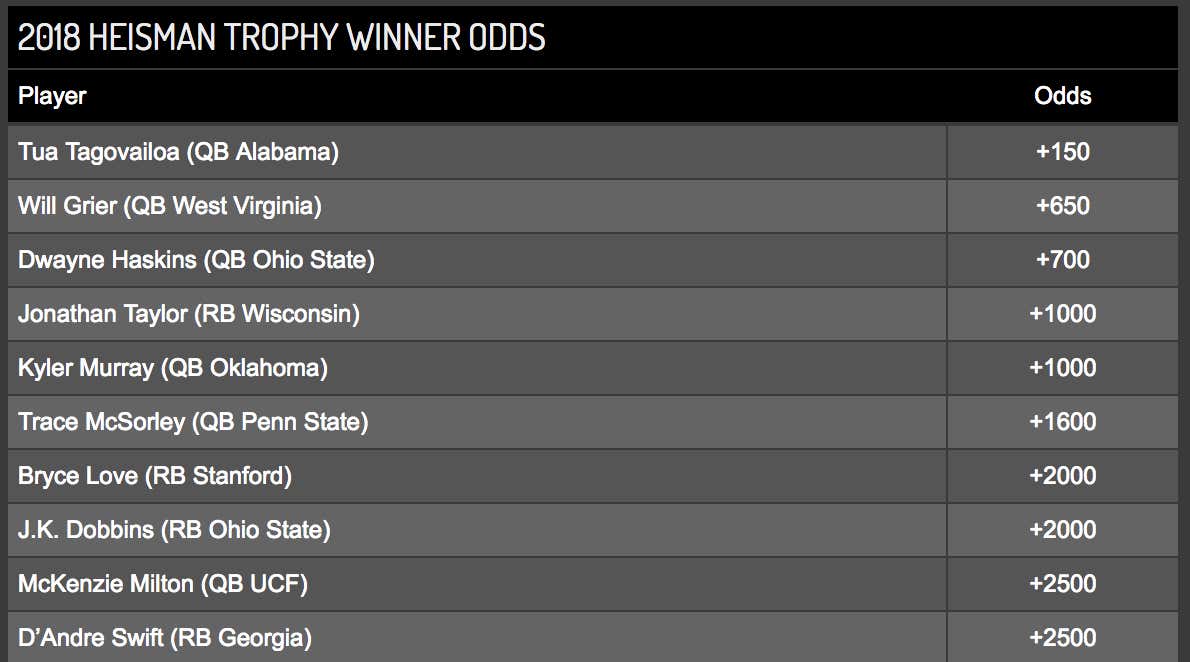 This is a 4/5 man race at the moment. Tua is firmly in the lead while a crew of Grier, Haskins, Murray, and McSorely trail not too far behind.

As we talked about before the season, the Heisman is typically a trophy handed to a QB on a national championship contending team. There are exceptions, but betting an RB to win the Heisman is not the smartest.

Kenny Hill is listed over at Bovada: 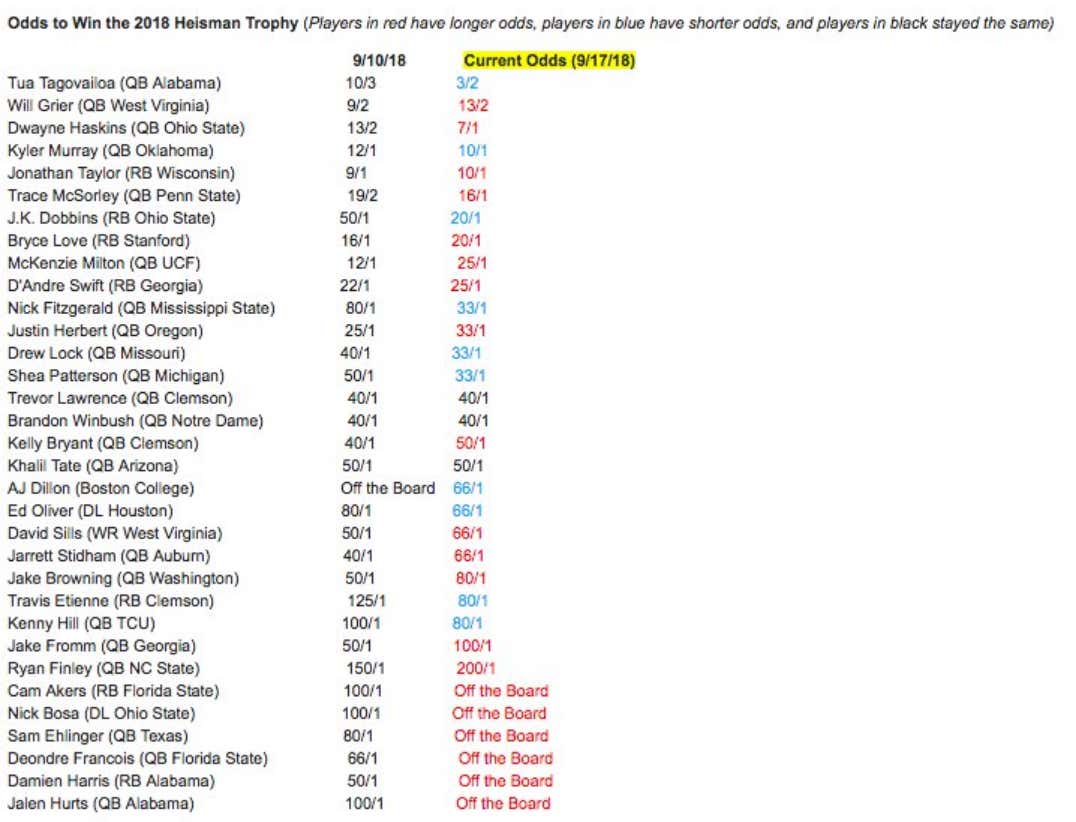 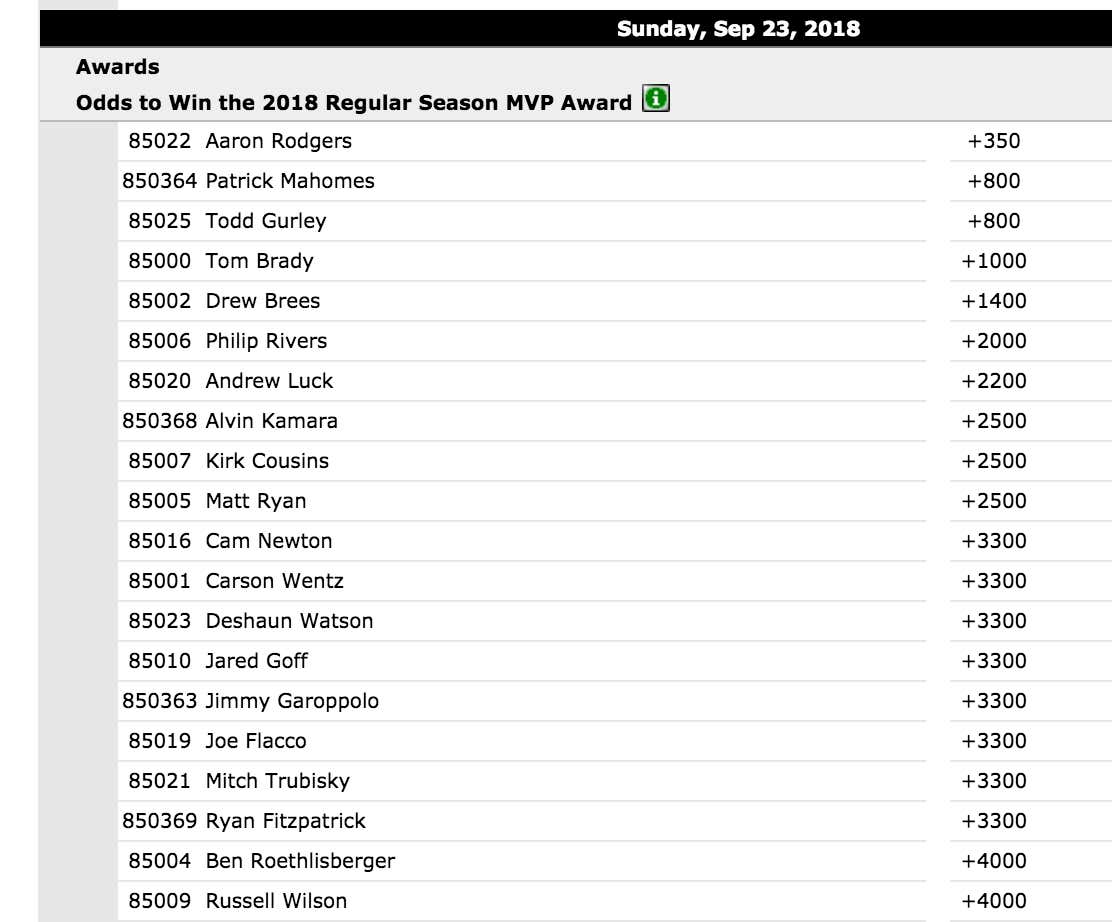