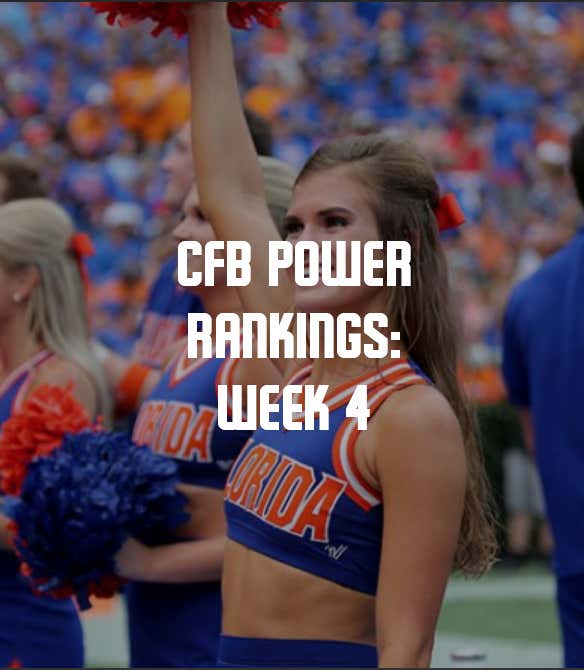 Power rankings……WEEK 4! Just a reminder: this is not an AP Top 25 or a ranking of who is going to get into the CFP. Instead, this is a look at who I believe is the best teams are 1-130. For example, last year I saw Ohio State, Penn State, and Wisconsin as better teams at the end of the season than Oklahoma (yes, I know they beat OSU) and Clemson. Did they have the same resumes as those two playoff teams? No, that’s why they didn’t get in, but if they played a game on January 15th, I would’ve put OSU, PSU, and Wisco as favorites over Clemson and Oklahoma.

The number next to each team is their power rating. It’s my way of comparing two teams. For example, I have West Virginia at 78 and Kansas State at 68.5. I’d set the line at West Virginia -13 (taking 3.5 points of home field advantage into account), while the line right now is at -16, so we may have value on Kansas State this weekend (the rating does not account for everything, such as travel situations, matchup advantages, etc.).

Alabama is the clear-cut best team in college football. Their disposal of Ole Miss this weekend was incredibly impressive. Right below them are Ohio State, Clemson, and Georgia. I’m excited to see how the Buckeyes do against Penn State next week on the road in a tough game.

You may be surprised that Auburn is higher than LSU and Michigan higher than Notre Dame. I want to reiterate that this is not a CFP or AP Poll. We are assigning values to these teams in terms of gambling. A 1 game sample size is small. According to Bill Conelly’s S&P+ stats (the Billy Bean of CFB), if you were to take into account the stats that came from the Auburn-LSU game, Auburn would have won that game 82% of the time in a 1000+ game sample. For the Notre Dame-Michigan game, Michigan would have won the game 58% of the time. Why we love football so much is because stats don’t always dictate the result of the game. You can find those stats here.

Oklahoma State took down Boise State in impressive fashion. Miami is not dead yet. A matchup between Oregon & Stanford will be a lot of fun on Saturday. TCU’s performance against Ohio State showed they could be a factor in the Big 12 race. Texas A&M is a top 25 team and is a 27 point favorite. What a time to be alive.

My hang up on LSU is Joe Burrow. He has yet to have a game with over a 50% completion percentage. He ranks 34th in overall QBR and 64th in EPA (expected points added) on passing attempts. You won’t win the SEC with that.

Last week, a decent amount of Virginia Tech fans were disappointed in my ranking of them. I am still not budging. I even considered dropping them after what Florida State did at Syracuse. The Hokies are a talented team, but I’m still not sold on them. The good news? We’ll learn more about them in week 5 & 6 with a game at Duke and will have a likely undefeated Notre Dame at home.

Duke took it to Baylor on Saturday but escaped with just a 48% win expectancy.

I’m excited to see how both Iowa and Wisconsin look on Saturday night in Kinnick.

I’m lower on West Virginia than most, but wouldn’t be surprised to see them head into Texas 7-0 on November 3rd. The biggest key for them will be staying healthy. 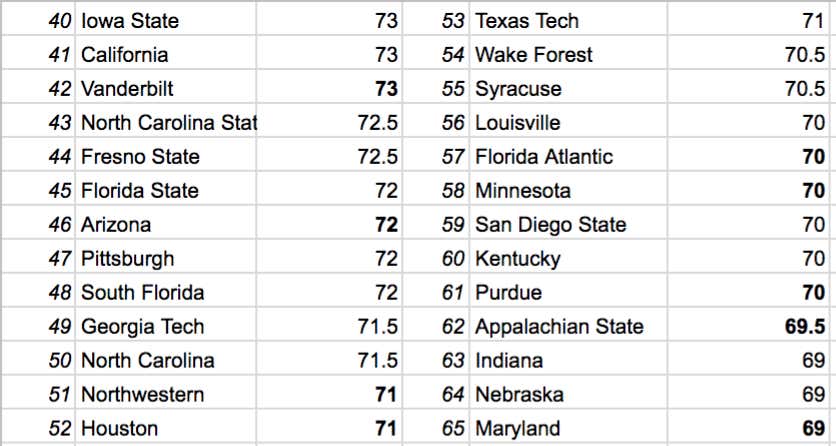 Florida State dropped 5 points this week. I want to drop them more, but there is just so much talent on that team. They are 11.5-point favorites against Northern Illinois and that’s where I would set the line according to my power ratings, so at the moment, I may have them rated correctly.

Fresno State dominated UCLA making them one of the best G5 teams in the nation. Houston’s defense was disappointing against Texas Tech. FAU’s matchup against UCF on Friday night should be a lot of fun. 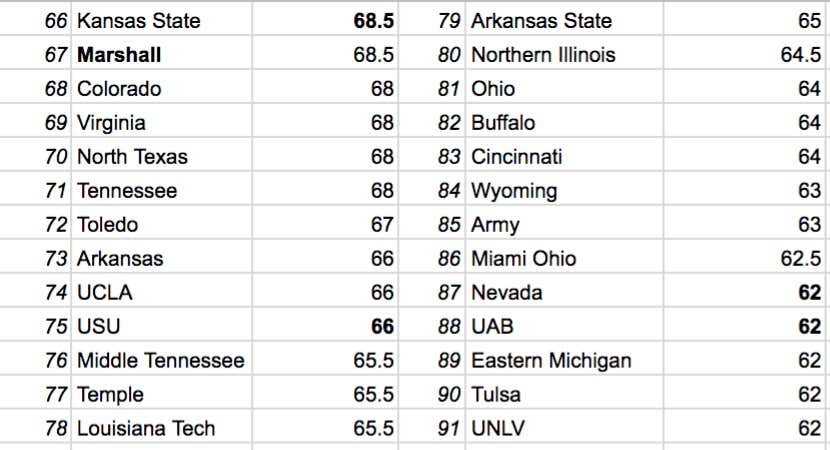 Buffalo’s victory over Eastern Michigan puts them in the top-tier of the MAC. 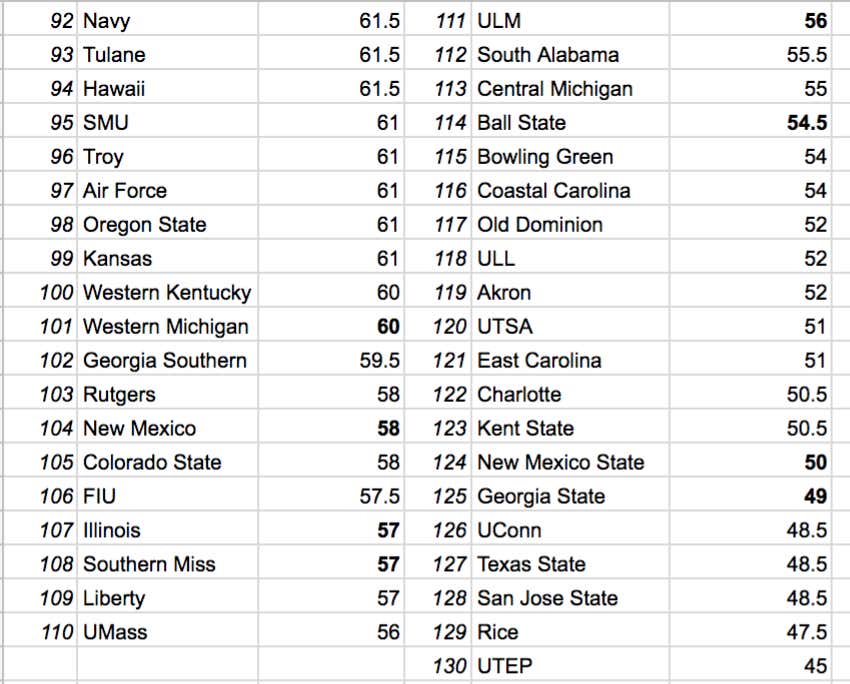 Biggest Discrepancies In Vegas vs. My Numbers:

Breaking: Vegas is smarter than me. However, I do start my week look at what I would set the line at compared to what Vegas has it at. Here are some current discrepancies, which may mean I have an edge on the market or that my number is wrong (the market is the best indicator for this and I compare my numbers to the closing numbers every week and make adjustments while looking at the box score of every game).

Notre Dame (-7.5 vs. -13.5 JMPR) @ Wake Forest: Notre Dame struggled against Vanderbilt over the weekend. Following that up with a trip to Wake Forest doesn’t seem tough on the surface, but any game against an okay opponent on the road at 12:00 PM is tough.

Akron @ Iowa State (-18.5 vs. -24 JMPR): Outside of a letdown game following their loss to Oklahoma, I don’t understand this line very much. Iowa State is at least 3 TD’s better than Akron. Plus, Akron is coming off their first win against a Big 10 team in over a century!

Ohio @ Cincinnati (-8.5 vs. -3 JMPR): I may be too low on Cincinnati, but I still haven’t bought into them yet. They beat a bad UCLA team on the road and then Miami (OH) in a torrential downpour. 8.5 seems too much for me against a good Ohio team.

Pittsburgh (-4) @ North Carolina (-2.5 JMPR): Pittsburgh does not deserve to be favored on the road against North Carolina. Their performance against ECU was gross, but a close loss to California in week 1 keeps looking better for Larry Fedora’s squad.

Western Kentucky (-2.5 JMPR) @ Ball State (-3): Although 0-3, Western Kentucky has looked not awful. This is a perfect opportunity to get in the W column and I think they’ll be able to do it on Saturday.

North Texas (-13 vs. -8 JMPR) @ Liberty: This is a perfect spot for Liberty to keep North Texas close following one of their biggest wins in recent history. 13 is a lot of points.

NC State (-5.5 vs. -1 JMPR) @ Marshall: Could Marshall upset NC State this weekend? I wouldn’t be surprised.

Michigan State (-4.5 vs. -10 JMPR) @ Indiana: People are too low on Michigan State after their loss to Arizona State. They had a bye week to regroup. I expect them to come out hitting on all cylinders on Saturday

Navy (-6.5) @ SMU (-2.5 JMPR): I don’t know how SMU will handle the triple-option, but this is not your Navy team of years past. Getting almost a touchdown with a home team for a Noon start, may be a good bet.

South Alabama @ Memphis (-31 vs. -21.5 JMPR): Memphis was favored by 28 points over Georgia State last week. South Alabama is not 3 points worse than Georgia State. I know it’s not apples to apples, but 31 points is A LOT.