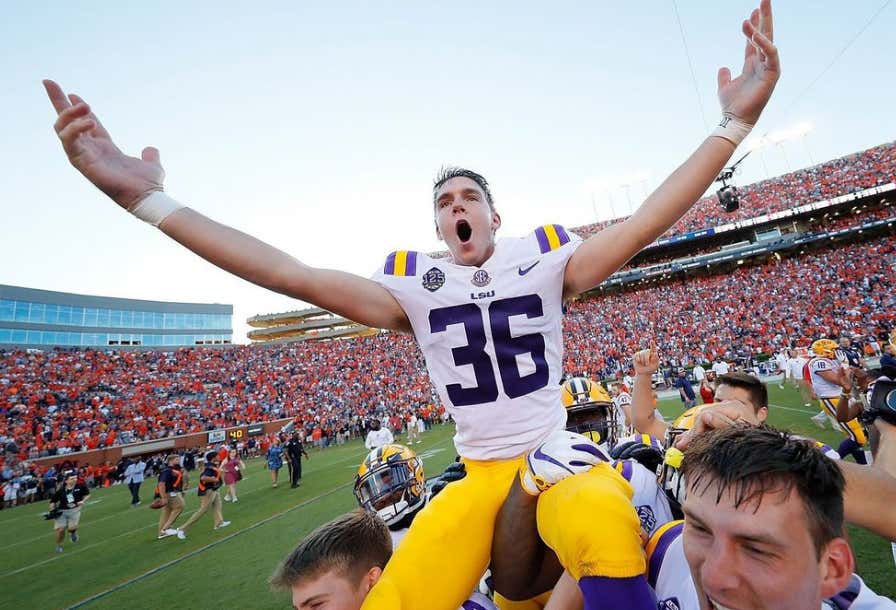 We’ve already discussed the journey of LSU’s Cardiac Kicker From Worcester. From a small liberal arts college in Worcester, Mass to being the king of LSU, Cole Tracy has done a complete 180 in terms of lifestyle.

LSU fans are about ready to build Tracy a statue. In true Southern hospitality, LSU fans are putting aside their problems with Yankees up north and giving back to where Cole Tracy honed his craft:

SOURCE-The gifts made in honor of a recent graduate just keep rolling in. Up to 116 through Tuesday evening, with the total almost $6,000.

“Thank you for sending us Cole Tracy,” reads the typical comment accompanying these donations to Assumption College.

And yes, he knows it’s more than a tad bit crazy, LSU fans giving money to a NCAA Division II school in Massachusetts because it’s where their new kicker came from. All of which suggests:

A couple of the initial gifts were for $54, apparently because of Tracy’s 54-yard field goal against Miami in the season opener. And yes, as you’d expect, a few of the gifts that have come in after Tracy’s 42-yard field goal to beat Auburn were for $42. A few were for $42.36 — 42 for the field goal, 36 for Tracy’s LSU jersey number.

I love it! It reminds me of giving gifts in increments of $18 for my friend’s Bar/t Mitzvahs.  All about significance. LSU is celebrating Cole Tracy becoming a man and donating just like a Bar Mitzvah back to Assumption. A football mitzvah!

Stanton says at Tracy’s request, the gifts made in Tracy’s name will go to support Assumption’s football program. And while we’re talking about names, during an interview Saturday night with USA TODAY Sports, Stanton joked about naming a goalpost for Tracy. Except he apparently wasn’t joking.

What a sport. The only thing keeping LSU from being perfect is banning their band from playing STTDB:

P.s. This video of Cole Tracy’s parents watching him hit the game-winner on Saturday is AWESOME: