Not to sure if anyone knows this but the browns have not won a single game in a LONG time. The fact they are the favorite in this game and by 3 points is absolutely insane. When was the last time they were a favorite? 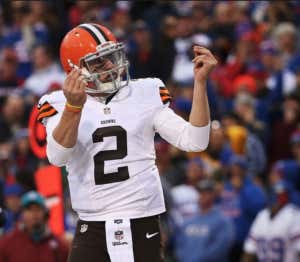 They were the favorite in 2015 with Jonny Manziel slinging the rock. If you look on the bright side, as favorites in this game…They won! This is is a slap in the face to the Jets. The Browns lose their top receiver, again haven’t won since 2016 and they are giving you three points…yikes.

Betting on this game is like betting on the WNBA. You know it isn’t going to be a good game but your eyes will be glued to the t.v. I am totally torn on this game because I want to see Browns fans erupt after a win against the Jets. Plus I’m tired of that bud light fridge being chained. On the other hand, I want to see them lose in heartbreaking fashion so we can still have the greatness of the Browns.

Final Prediction, Jets win this game and the Browns live on to be the laughing stock of the NFL.