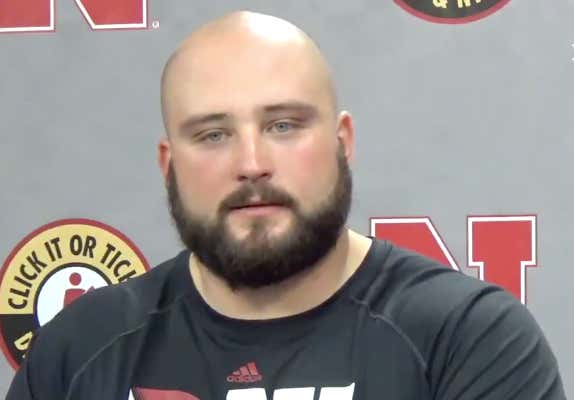 Nebraska has started their season 0-2. To say this was not the ideal start for the Scott Frost era would be an understatement. What’s the issue? The talent? Are players not buying in? Enter offensive lineman Tanner Farmer:

College football’s equivalent of Socrates, Tanner Farmer is (you see the Yoda thing I did there?).

Before we dissect the 1 minute and 53 seconds of preaching to the choir by Mr. Farmer, let’s go over the legend that he is.

1. I can’t think of a better name for a Nebraska lineman. Tanner Farmer. You can just envision this guy farming corn in the fields of Nebraska. He is the epitome of Nebraska.

2. Tanner can squat 765 pounds. Think about how much that is. SEVEN HUNDRED SIXTY-FIVE POUNDS!

3. Tanner isn’t stopping there. He believes 765 is lightweight.

Farmer really hit the nail on the head about being a part of a program under a new head coach. Often times, the thought is that a great coach like Scott Frost will come into a program and transform it right away. That’s rarely how it works. The players in the locker room weren’t recruited by the new coaching regime. Every coach wants their certain type of player. A guy recruited by Mike Riley is much different than a guy recruited by Scott Frost.

With that being said, what is going on with Nebraska? The two losses they sustained were a bit deceiving. Let’s start with week 2 against Colorado. According to Bill Connelly’s S&P+ statistics (think Moneyball but for CFB), a team that played with similar statistics to Nebraska would’ve beaten Colorado 93% of the time:

Losing with a 2.16 yards-per-play differential is almost unheard of.

In their game against Colorado, starting QB Adrian Martinez went down due to a dirty play by a pair of Buffs. He was out for week 3 against Troy. Thanks to the backup transferring during fall camp, Nebraska had to start a walk-on Freshman. Losing to Troy is never okay when you are Nebraska, but the circumstances explain the story a bit more.

As you can see here, Nebraska had more scoring opportunities, yards-per-play, 100+ more yards, and a higher success rate than Troy.

Nebraska could easily be 2-0, but they aren’t. That’s the beauty of football/sports: statistics don’t always dictate the winner of a game. This week they get a tough game against Michigan. Reports are that Adrian Martinez may be ready to play. They are currently 17.5 point underdogs. It’s more likely than not that they will be 0-3 come 3:30 PM Saturday. The takes will be hot, but don’t buy into them. Nebraska is going to be fine, especially with Tanner Farmer leading the troops. Building a program back up is a process. It doesn’t happen overnight.