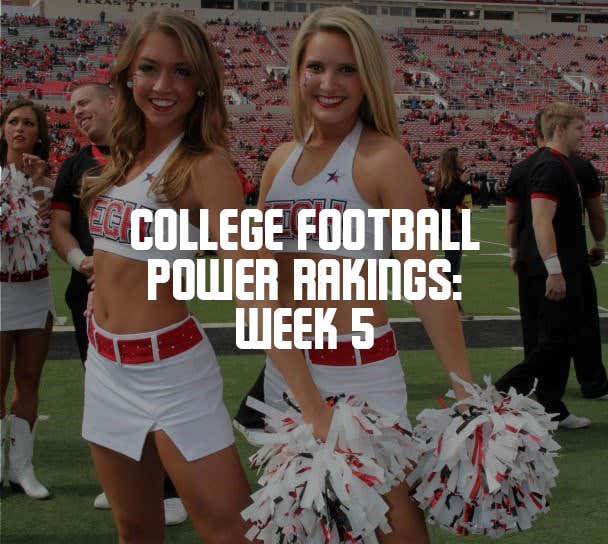 Power rankings……WEEK 5! Just a reminder: this is not an AP Top 25 or a ranking of who is going to get into the CFP. Instead, this is a look at who I believe is the best teams are 1-130. For example, last year I saw Ohio State, Penn State, and Wisconsin as better teams at the end of the season than Oklahoma (yes, I know they beat OSU) and Clemson. Did they have the same resumes as those two playoff teams? No, that’s why they didn’t get in, but if they played a game on January 15th, I would’ve put OSU, PSU, and Wisco as favorites over Clemson and Oklahoma.

The number next to each team is their power rating. It’s my way of comparing two teams. For example, I have Ohio State at 96 and Penn State at 87. I’d set the line at Ohio State -5 (taking 4 points of home field advantage into account), while the line right now is at -3.5, so we may have value on Ohio State this weekend (the rating does not account for everything, such as travel situations, matchup advantages, etc.).

Before we begin, I would like to formally invite you to tell me why I’m wrong in the comments/on Twitter (@JackMacCFB)

We are going to learn a lot about Penn State, Ohio State, and Notre Dame this week. Oklahoma stays at 5 even after their close defeat to Army. Playing the triple-option is difficult, especially when you are built like a Big 12 defense.

Clemson naming Trevor Lawrence their starter was the right decision. He gives them a much higher ceiling. He’ll have 8 games against relatively easy opponents before postseason play comes around. Georgia’s performance against Missouri was concerning. If they can’t stop the run (rank 108th in rushing efficiency) they will not survive LSU & Kentucky.

I’m not out on Mississippi State. No team is as bad on their worst day. We still haven’t seen their best.

There’s a thought that Stanford is a top-5 team. That’s wrong. They will be exposed this weekend.

There’s a lot of talk about Ian Book at Notre Dame and Trevor Lawrence at Clemson, but I’m very excited to see the N’Kosi Perry era at Miami. He gives a completely different dimension to the Canes.

West Virginia at Texas Tech this week will be a lot of fun.

Kentucky fans will be mad they are at 26. That’s fine. They’d be mad if they were at #5. We’ll learn more about them against South Carolina this week.

It looks like UCF may go undefeated again. Get ready for that storyline.

JT Daniels showed us why so many people were high on him on Friday night:

Don’t overreact to Boston College’s loss at Purdue. A Noon game at Purdue is a tough situation. I’m still high on them for the rest of the season. Purdue is 1-3, but could be 4-0.

If you are looking for a team to challenge UCF, it’s Memphis. Brady White is LEGIT.

Texas Tech has a defense and a QB. Big 12 sleeper?

Duke & Kentucky are ranked in the Top 25 together for the first time since 1957. 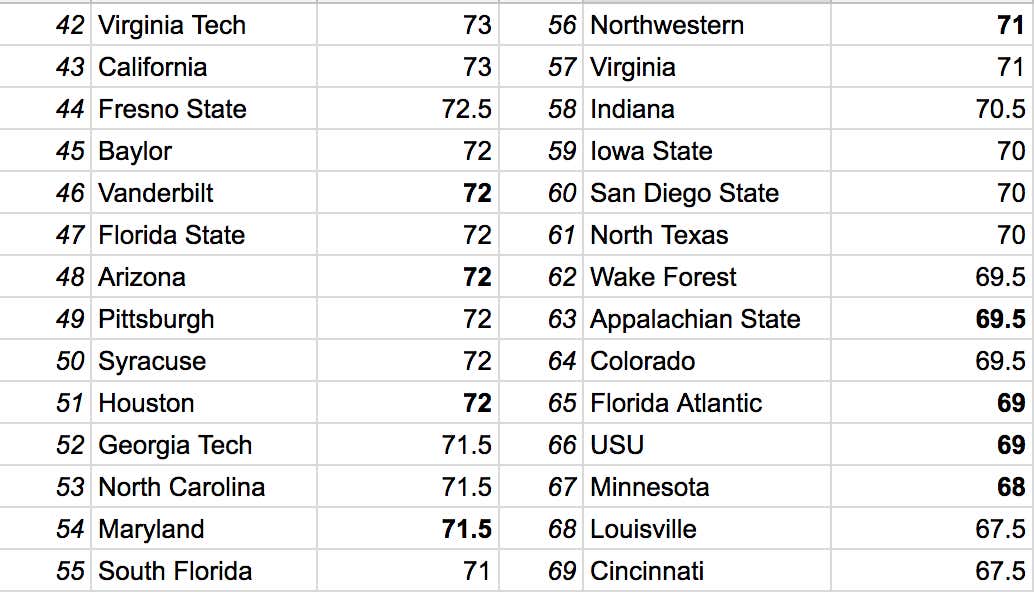 Florida State stinks, but they still have a lot of talent. Don’t forget about them.

4-0 Syracuse has Clemson this week. I’m interested to see what that offense can do against a stout Clemson defense.

I was low on Virginia coming into the season. I was very wrong about that. Bryce Perkins is the most electric player in CFB you haven’t heard about.

Louisville…..sheesh. Bobby Petrino has his work cut out for him. 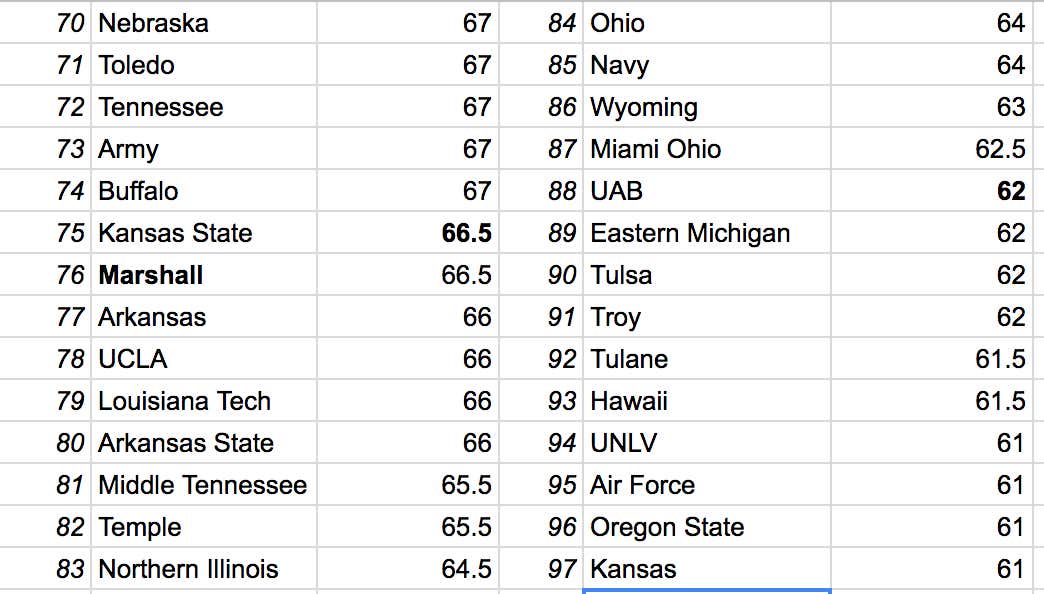 Army & Buffalo should be a lot of fun this weekend.

On Nebraska, UCLA & Tennessee: I believe in both of these coaches. It’s going to take awhile, but they are going to figure it out.

Kansas is still Kansas. Their two wins? Central Michigan & Rutgers. 90% of college teams could beat them. 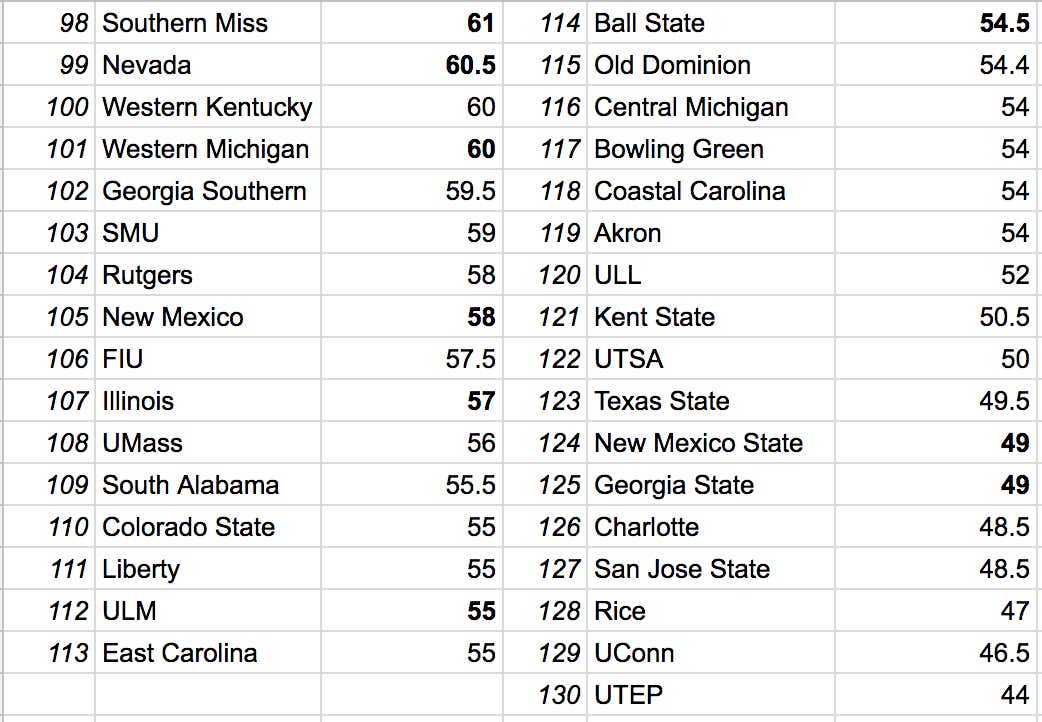 Another team I was low on coming into the season that is proving me wrong: East Carolina. They are still a bottom-20 team, but the defense is surprisingly putting up good numbers (17th in efficiency, 66th overall).

I can’t get over how bad UConn’s defense is:

It’s a shame because the offense is decent (74th).