Is there a dumber thing you can do as a coach than get into it with your own fans after a game?!?! There’s no winning. Plus, it’s your own fan. I mean look at this guy: 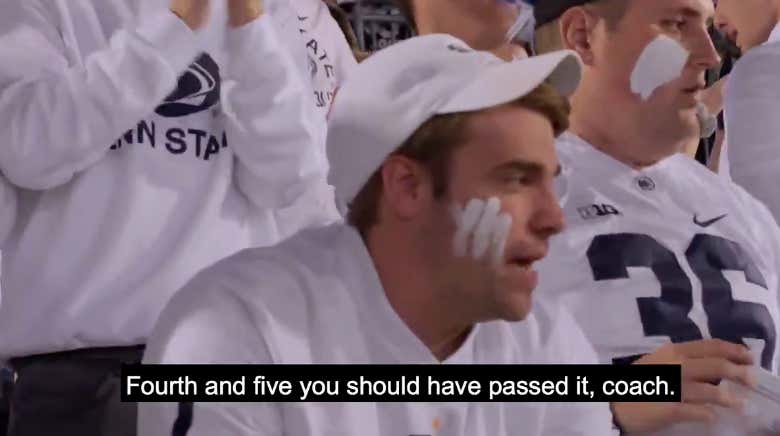 You are getting paid $5,800,000 a year and you are letting this guy with face paint on to chirp you?! He didn’t even say anything that absurd, just “you should have passed it.” If he called him an insulting word or insulted his family, I get it a little bit, but getting rattled by a simple “bad play call, coach?” Really?

Also, what was James Franklin’s plan here? To go run over and jump into the stands like he was on the Bruins in 1978?!

This random fan really got to Franklin, as he put on a bizarre performance in the post-game press conference:

Maybe being great isn’t running the ball on 4th and 5 when the game is on the line? Just a thought.

Imagine being Trace McSorley and seeing those comments that you are “comfortable” being “great” after the same coach took the ball out of your hands in the biggest moment in your season/career. I like James Franklin but he has a bit too much Bob Diaco in him.