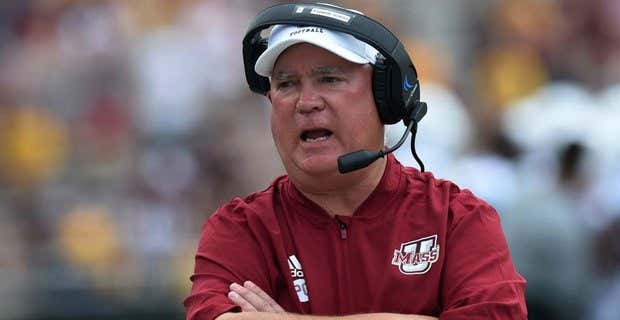 A tough weekend for UMass football:

SOURCE-The University of Massachusetts has suspended head football coach Mark Whipple for referencing rape in his postgame comments after his team’s latest loss.

The Minutemen lost to Ohio on Saturday, 58-42, on the road. Whipple was critical of officials after the game in an interview on the UMass radio broadcast.

When discussing what he believed to be a missed pass interference call, Whipple said the officials “raped us.”

On Sunday, the university announced that Whipple has been suspended for one week without pay. The suspension includes the team’s October 6 game against South Florida.

SOURCE-But in the opinion of UMass head coach Mark Whipple, the game was decided by officiating. Whipple sounded off on the officiating crew afterward, in a postgame interview with the UMass radio broadcast, and at one point compared a (in his opinion) missed pass interference call to sexual assault.

“They raped us,” Whipple said.

“We had a chance there with 16 down and they rape us, and he picks up the flag. So our guys fought. They have a good team and they were home, and I thought our guys were certainly ready to play because we went up 14-nothing. We just have to get ready for next week. We didn’t make enough plays to beat a team like that. “

Whipple is referencing an exact play, but looking at the stats, UMass had 8 penalties for 77 yards, while Ohio had 5 for 45. Probably would have been better for Whipple to have said something else, but Whipple is 61-years-old. You know what old guys do? Say ridiculous shit.

UMass is 2-4 after Saturday’s loss to Ohio. Whipple will return for UMass’ game against Coastal Carolina, a week before they take on UConn in a game of which northeast college football team is a bigger joke.