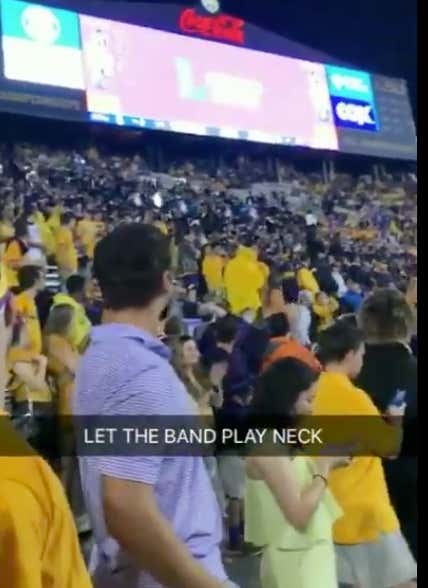 Should LSU allow the band to play neck?!?!? It’s been a controversy for 5+ years and finally, we have Coach O’s thoughts on it:

Ed, I love you, but stop it. We all know you love the words.

What’s the controversy? Well, Neck is an electric tune used by multiple bands across the country. LSU fans have remixed it in a hilarious, but “offensive” way:

If you can’t hear or listen, the LSU fans yell “suck that tiger dick, bitch.” The tune was banned by LSU in 2010. Ever since then fans have clamored for it to be played:

Last year, OBJ paid the fine for it to be played:

If LSU is smart, they should save Neck for their advantage. There is no more electric environment in sports than when Neck is played. Imagine this: LSU is down 3 to Alabama late in the third. Alabama has the ball on LSU’s 10-yard-line right in front of the student section. The band hits the trumpets and drop the beat. The crowd would ERUPT. It would be one of the best moments in college football history. Immediate advantage to LSU for the rest of that game.