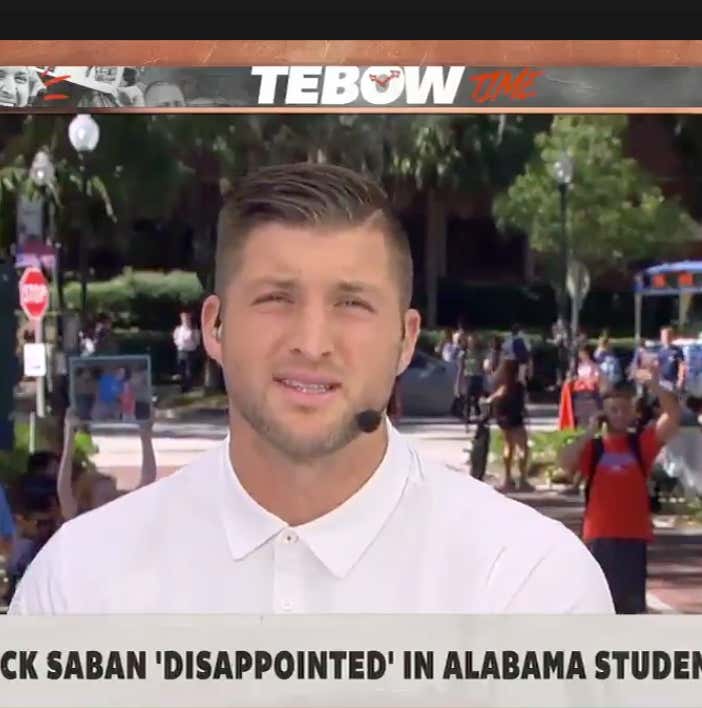 Nick Saban’s comments over the Alabama student section provoked a lot of discussion over the past few days.

The one opinion I wasn’t expecting was Tim Tebow’s:

TIMMY FROM THE TOP ROPE!

“I think the fans are getting so entitled there at Alabama, specifically the students,” he said. “Listen, as a student, you’ve done nothing to win all these titles, OK? You spend a little bit of your daddy’s money to show up at a game and to go to school there. You say you’re the best fans in college football. Well you need to show up. I don’t care if you’re playing Louisiana whoever or if you’re playing Hoover High School. You show up for the game and you support your team. Because if you want to say you’re the best fans in the country, you show up every game no matter what. Coach Saban is right. Alabama students, you need to show up for your team.”

Listen to Tim Tebow say this in his raspy high pitch voice was laugh out loud funny. I spit out my drink when he said, “You spend a little bit of your daddy’s money to show up at a game and to go to school there.”

“Listen, as a student, you’ve done nothing to win all these titles, okay?” Thanks for letting the students know that, Timmy. They really appreciate it. All of them thought they were on the team before. Now they don’t thanks to you and your top button buttoned shirts.

This is a weird hill to die on for Tim Tebow. He’s obviously still a bit beat up about the time Alabama made him cry in 2009:

The best part about this moment is the camera directly cutting to Mark Ingram and Julio Jones doing the Gator Chomp.

This is what happens when Alabama plays Louisiana-Lafayette at 11 AM on a Saturday and give most of your student tickets to frats.

P.s. If you ever want to get into some wild Alabama politics, look up “The Machine Alabama” on Google. It relates back to the frats always getting tickets to football games. Wild, WILD stuff. Going to have to do a blog on it one day unless I’m killed first.