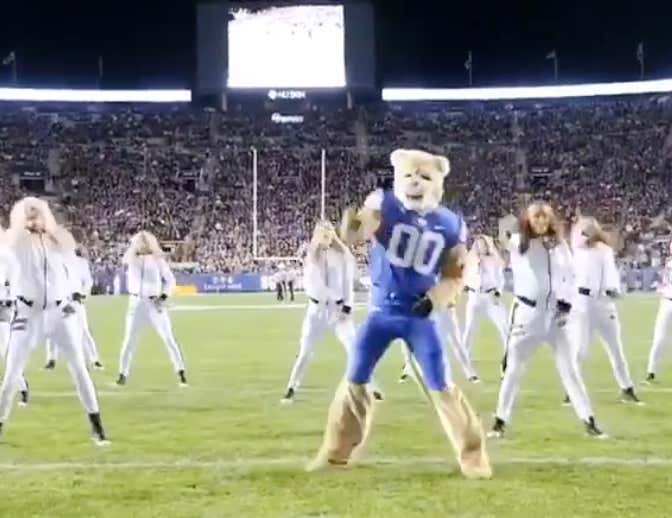 This isn’t the first time Cosmo has gotten down:

The question is: what does the Mormon Church think of this? I did a little research on dancing as a Mormon:

MORMON RULES-For some reason, many people seem to think that Mormons aren’t allowed to dance.  While I agree that some Mormons can’t dance very well, Mormons certainly can dance!

Many recent dances styles are suggestive and inappropriate.  Mormons are encouraged to avoid these styles of dance.  A Mormon pamphlet, called For Strength of Youth, says:

When dancing, avoid full body contact with your partner. Do not use positions or moves that are suggestive of sexual behavior.

After review, Cosmo The Cougar’s dancing isn’t that sexual. He also avoids all contact with the cheerleaders. When I started this blog I was expecting to write a “the Mormon Church has gotten soft, what’s next?” blog, but as an unbiased Journalist, I changed my tune after looking at the facts. Great job by me. I’m most surprised by the backup dancers. At least they aren’t showing any skin. That would be an immediate dismissal.

P.s. I could live to 150 and hear the name “Cosmo” and immediately think of one thing and one thing only: Cosmo Kramer