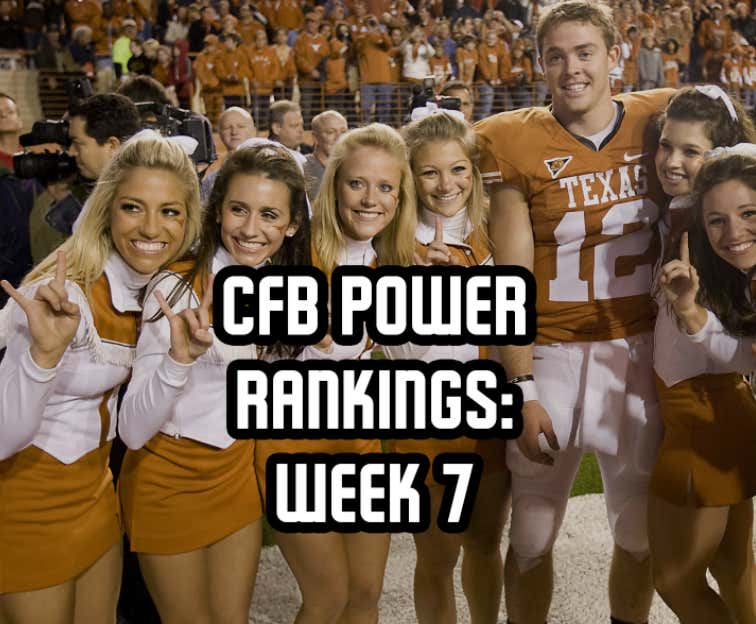 Just a reminder: this is not an AP Top 25 or a ranking of who is going to get into the CFP. Instead, this is a look at who I believe is the best teams are 1-130. For example, last year I saw Ohio State, Penn State, and Wisconsin as better teams at the end of the season than Oklahoma (yes, I know they beat OSU) and Clemson. Did they have the same resumes as those two playoff teams? No, that’s why they didn’t get in, but if they played a game on January 15th, I would’ve put OSU, PSU, and Wisco as favorites over Clemson and Oklahoma.

The number next to each team is their power rating. It’s my way of comparing two teams. For example, I have Michigan at 88 and Wisconsin at 85. I’d set the line at Michigan -7 (taking 4 points of home field advantage into account), while the line right now is at -7.5 (the rating does not account for everything, such as travel situations, matchup advantages, etc.).

Each week, I compare my power rating to the closing line (the most efficient market in sports). For example, last week I had Georgia Southern at 62.5 and South Alabama at 59, setting the line at -6 (game was at GeSo). That line closed at 12. Hence why South Alabama has been downgraded from 104 to 119. I, also, look at five-factor box scores to see if there are any misleading final scores. Sometimes my power rating is off, but I don’t adjust because of the performance on the field. Last week I had Notre Dame -11.5, a line that closed at -6.5. Notre Dame dominated that game, showing my rating was ahead of the market a bit.

There are three classes in college football right now. Alabama is class one. OSU, Clemson, Georgia are class two. Then there is everyone else.

All 5 of these teams are talented enough to make the playoffs, but outside of Notre Dame, they have losses holding them back. Although Virginia Tech isn’t a top-10 team, that win by Notre Dame was phenomenal. They control their own destiny.

A lot of people were mad online about placing LSU so low in my rankings for so long. Saturday proved I have them exactly where they should be. They are a good team, but people were clamoring to have them in the top 3. That’s called overreacting. LSU ranked 11th last week and ranks 12th this week. No need to change them that much. They are still a good team. Not an elite one.

West Virginia and Texas will be a lot of fun in a few weeks.

I wish Donald Trump would make an executive decision and put UCF in the ACC for the rest of the season. They are a good team, but how good?

Kentucky is very similar to LSU. Fans were very mad that Kentucky wasn’t in the top 15. They never deserved that. These rankings are not based strictly on games that have happened. They are predictive rankings. Kentucky is a good, top-25 team. Their fans should be happy with that.

Michigan State is an interesting case. They have the talent and experience but don’t show up on the field. I don’t want to overreact and downgrade them too much. That’s why they still are in the top-30.

Is Colorado the Pac-12’s best chance to get into the playoff?! 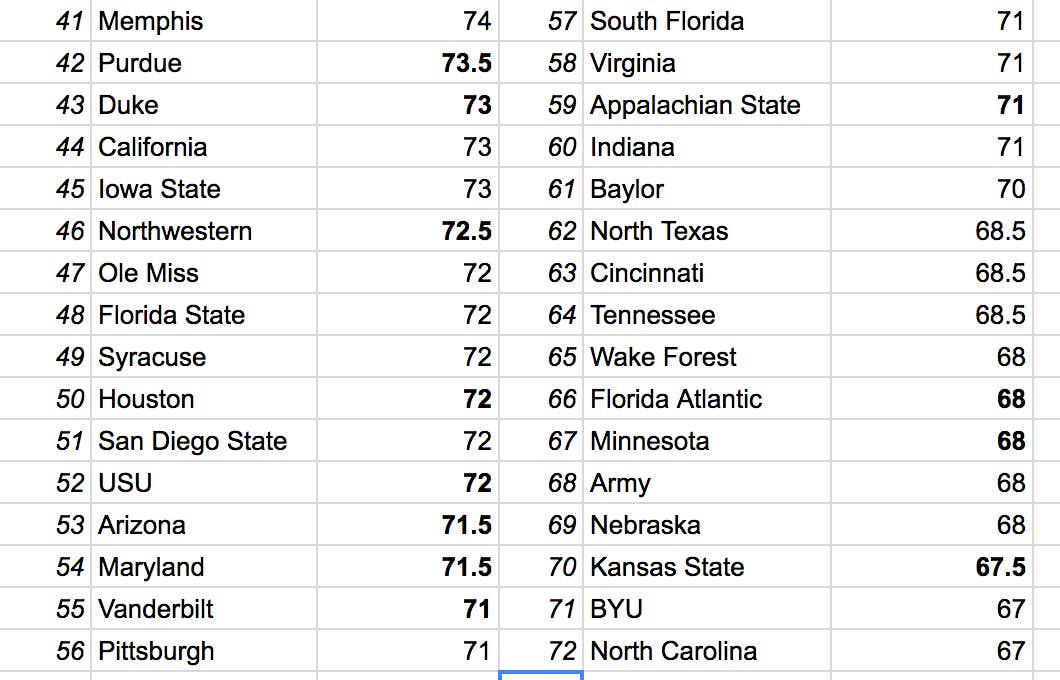 Purdue is another good lesson for bettors. THey started 0-3, but all losses were by one score. They’ve broken through since. Ohio State better be careful next weekend.

Florida State is a good football team. They aren’t a top-25 team, but they are a good team. Do not overreact to early season results, especially with a new coach.

Virginia has an interesting matchup against Miami this weekend.

Cincinnati is 6-0. Them, Houston, Memphis, and South Florida are going to make for a fun AAC race. 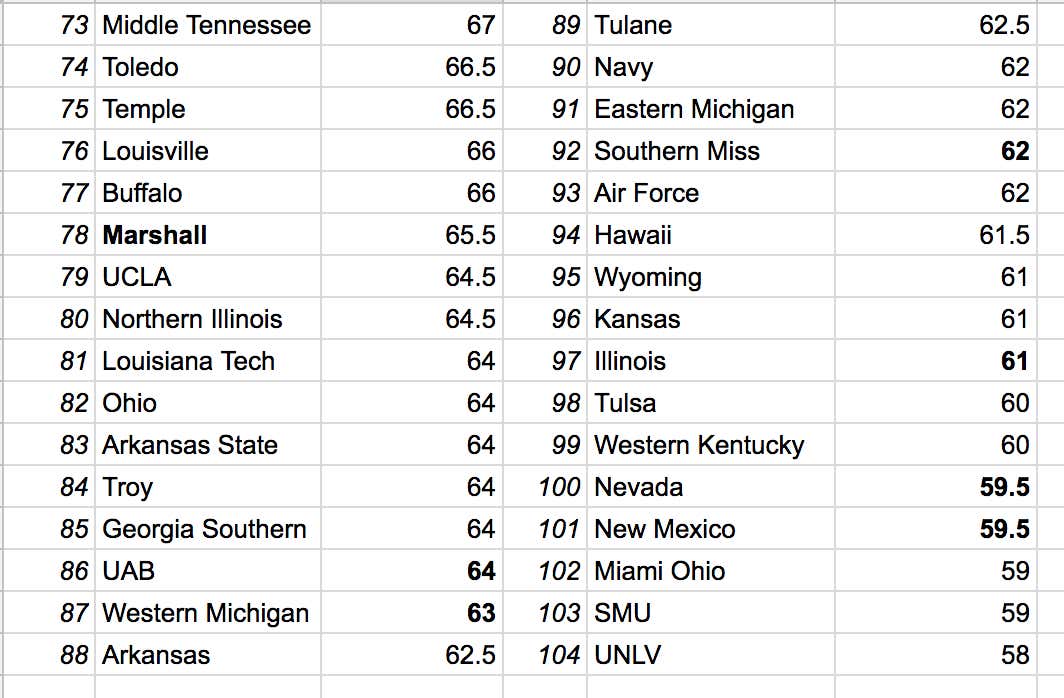 I don’t wanna sound stupid, but I may be buying Arkansas at some point this season. We’ll see how they look against Ole Miss at home on Saturday.

The switch in the service academy hierarchy has come. Army is far better than Air Force and Navy.

What a season for Hawaii. Can they make a run at the Mountain West championship? Most likely not, but a great job by Nick Rolovich nonetheless. 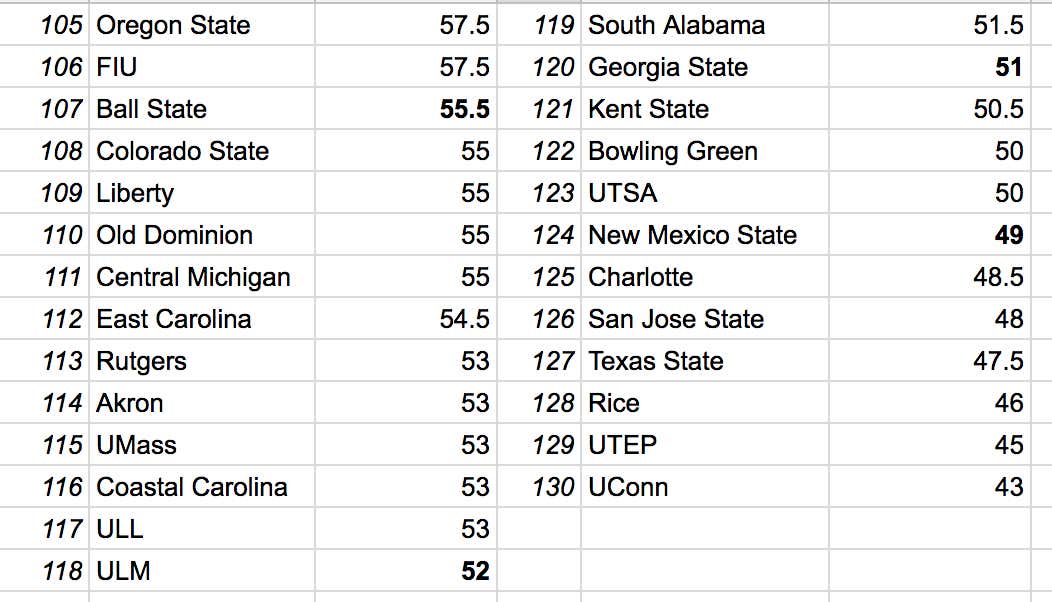 I can’t believe how bad Rutgers is. A 21 point loss to Illinois at home?! Really?

Another shocker: Virginia Tech losing to Old Dominion. This ODU team is not a good one, but everything went well for them a couple weekends ago.

My weekly update on UConn: THEY STINK. UConn has now fallen below UTEP as the wrost team in America.