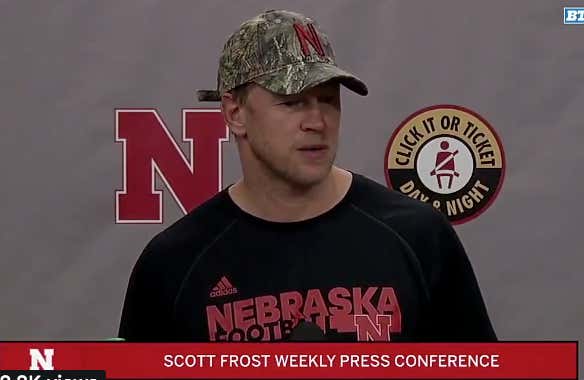 Nebraska coach Scott Frost said Thursday that potential tampering by Oregon State led the Cornhuskers to list the Pac-12 school among institutions not permitted to contact running back Greg Bell about a potential transfer.

Bell, a top-rated junior college prospect signed by Frost last December, started the first three games for the Cornhuskers this season. He then requested a scholarship release in the week after he lost the top position on Sept. 29 against Purdue.

Nebraska granted his release but restricted Bell from talking with fellow Big Ten members, non-conference opponents of Nebraska over the next three years and Oregon State.

I think my number one beef with college football is restrictions coaches/programs place on transferring players. If a player deems he wants to transfer, he should be allowed to go where he wants. He’s not 8-years-old.

The argument against it is simple, “well the player made a commitment to the program! We don’t want free agency in college football!”

Well, Scott Frost, you are fresh off leaving a 3-year contract at UCF….you don’t want free agency in college football? Didn’t you just partake in it? Would’ve been a real shame if you got a message like this to “comply” to….

Now to his tampering comments…..

Three Nebraska players recently transferred to OSU, including former four-star prospects Tristan Gebbia, a quarterback, and receiver Tyjon Lindsey. Both players were recruited to Nebraska by former coach Mike Riley, who now works as an analyst at Oregon State under Jonathan Smith.

Ex-Nebraska assistant Trent Bray is also on staff at OSU, as are three former members of Nebraska football administrative staff.

“There’s no doubt in my mind that those kids were probably in touch with some people that they formerly knew that were here,” Frost said of Gebbia, Lindsey and linebacker Avery Roberts.

Is there tampering at Oregon State? Duh. Does it matter? I guess? That doesn’t mean a 20-year-old shouldn’t be able to decide where he wants to transfer. It’s not like he isn’t fined. He has to sit out a year before regaining his eligibility in most cases.

I understand Scott Frost wanting to protect his program. You have to do what you have to do in the current structure of college football. Although, maybe Scott Frost should focus on his current team that is 0-5.