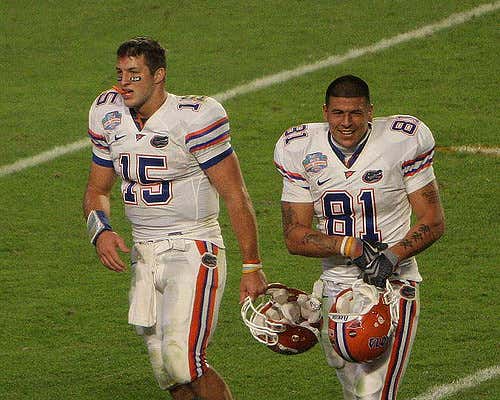 SOURCE-Tim Tebow saved Aaron Hernandez at the University of Florida, according to Hernandez’s lawyer, before the tight end left for a brief career in the NFL that ended with a murder sentence.

While Gators coach Urban Meyer had become frustrated with Hernandez because of his “chronic” marijuana use and tried to throw him off the team, Tebow convinced him not to, according to Jose Baez, the ex-Patriot’s lawyer, in a Boston Globe report.

Tim Tebow, an angel on earth.

Meyer allegedly told Hernandez that he had to turn pro after his junior season — which he did, eventually drafted by the Patriots — but he had only failed one drug test during his time at Florida, the newspaper reported.

Hmmmmmm, maybe that’s because Urban Meyer forgot all of the other times he failed a drug test? Who knows. I’m just spitballing here. I just know Urban Meyer forgets some things here and there.

“But the tests would come back that he was not smoking and he denied it all the time,” said Meyer, who did not respond to the allegations from Baez, published in “Unnecessary Roughness: Inside the Trial and Final Days of Aaron Hernandez.”

Tebow had hosted Hernandez on a recruiting trip to Florida before the Connecticut native graduated from high school a semester early — pushed by Meyer to do so, Hernandez’s high school principal told the paper — and enrolled in college.

The 2008 Florida team needs a Barstool Sports documentary done on it.

A lot came out of this “Gladiator” podcast about Aaron Hernandez’s life:

SOURCE-“He is looking at me wide-eyed, and he says, ‘I just want to warn you that (Hernandez) is going to talk about being bathed by his mother,” Lloyd said of a story Welker told him. “He’s going to have his genitalia out in front of you while you’re sitting on your stool. He’s going to talk about gay sex. Just do your best to ignore it. Even walk away.”’

What a sad, sad story and a waste of talent.