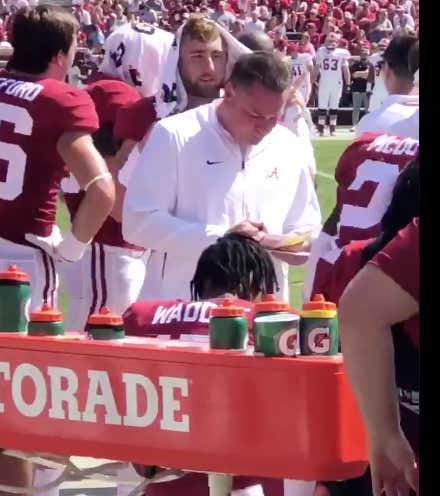 Do you remember Butch Jones, aka champion of life? Well, just like me, he’s an intern now:

How’s it going for Butch?

Butch has gone from the king of Rocky Top to a sideline without having a headset. Butch not even getting a headset is beyond insulting. Why?

SOURCE-The NCAA Playing Rules Oversight Panel approved the rule on May 18. It limits teams to 20 headsets on game days—15 to be used by the coaching staff including head coach, assistant coaches and graduate assistants. Players will use four headsets and one headset will go to someone for non-coaching activities like charting plays.

Butch was the coach of an SEC team last year and now not even in the top 15 coaches on Alabama’s staff! Time to rebuild himself, brick by brick:

Butch will return to Rocky Top this weekend as Alabama takes on Tennessee. Alabama players are getting on him for never beating them:

“He’s never, you know what I’m saying, smoked a cigar before,” Jacobs said with a laugh

Josh Jacobs, buddy, you could have said this better. Most will know what you are talking about if they understand the Tennessee-Alabama rivalry, but if not….there could be a not ideal way to describe this comment.