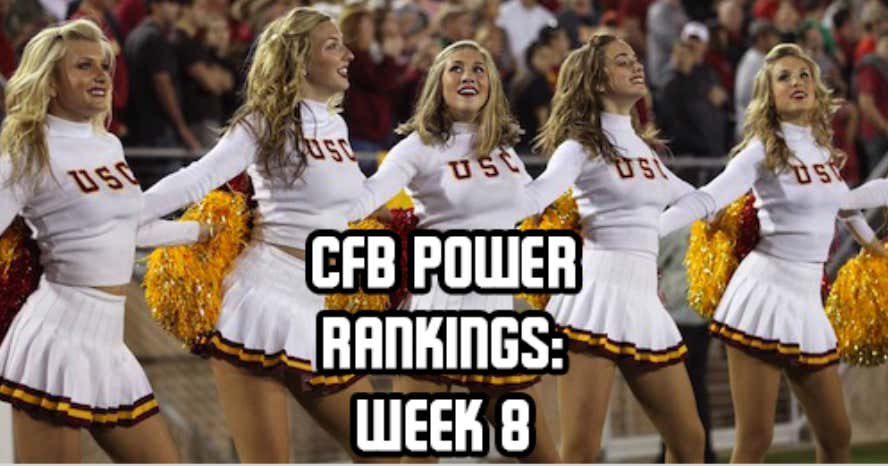 The number next to each team is their power rating. It’s my way of comparing two teams. For example, I have LSU at 86 and Mississippi State at 82.5. I’d set the line at LSU -7.5 (taking 4 points of home field advantage into account), while the line right now is at -6.5 (the rating does not account for everything, such as travel situations, matchup advantages, etc.).

Each week, I compare my power rating to the closing line (the most efficient market in sports). For example, two weeks ago I had Georgia Southern at 62.5 and South Alabama at 59, setting the line at -6 (game was at GeSo). That line closed at 12. Hence why South Alabama has been downgraded from 104 to 119. I, also, look at five-factor box scores to see if there are any misleading final scores. Sometimes my power rating is off, but I don’t adjust because of the performance on the field. Two weeks ago I had Notre Dame -11.5, a line that closed at -6.5. Notre Dame dominated that game, showing my rating was ahead of the market a bit.

The team with the best chance to beat Alabama? **whispers** Michigan. They have the pass defense to shut down Tua and the explosive offense to expose Alabama’s defense, which struggles against explosive offenses.

You are going to hate Georgia is still 4.5 points better than LSU. That’s fine. If Georgia and LSU played tomorrow, Georgia would open as favorites. That’s the goal of these rankings.

Mississippi State is putting LSU on upset watch on Saturday.

I’m very impressed with what Jimbo Fisher has done with Texas A&M in his first year.

UCF is going to go undefeated again. Prepare yourself for when they don’t make the playoff.

Yes, Auburn lost to Tennessee. Yes, they are still one of the most talented teams in the country. Same goes for Miami.

I’m very interested to see how JT Daniels does on the road against Utah. Same with Washington State against Oregon in one of their biggest games in the past few years. 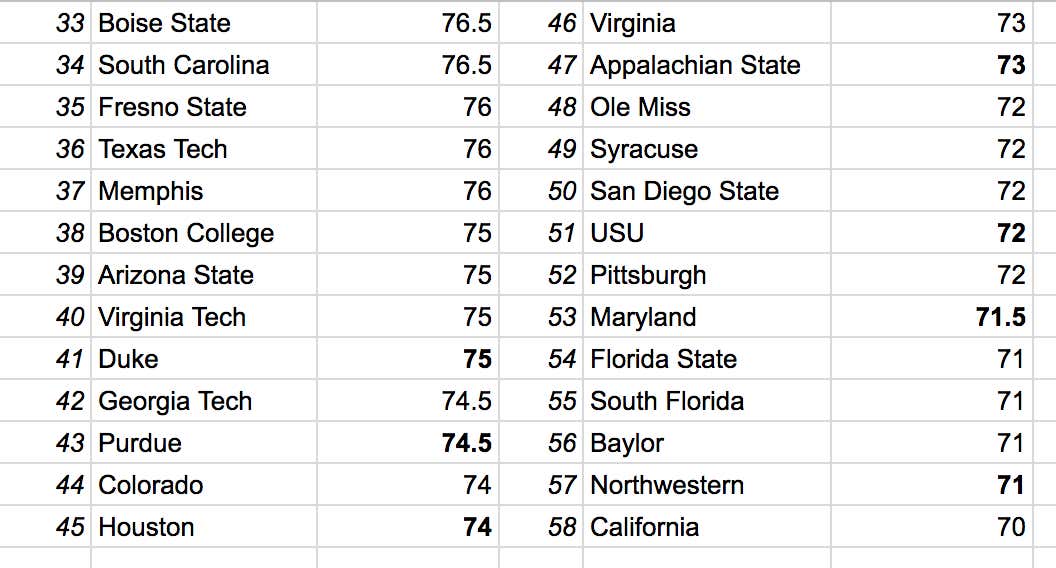 This is the best the G5 has been in a few years thanks to UCF, Memphis, South Florida, Boise State, Fresno State, Appalachian State, and Utah State.

I don’t see anyone competing with Clemson, but the middle class of the ACC is not bad: BC, VT, Duke, Virginia, Syracuse, Pittsburgh, FSU.

It seems as if California is completely broken. 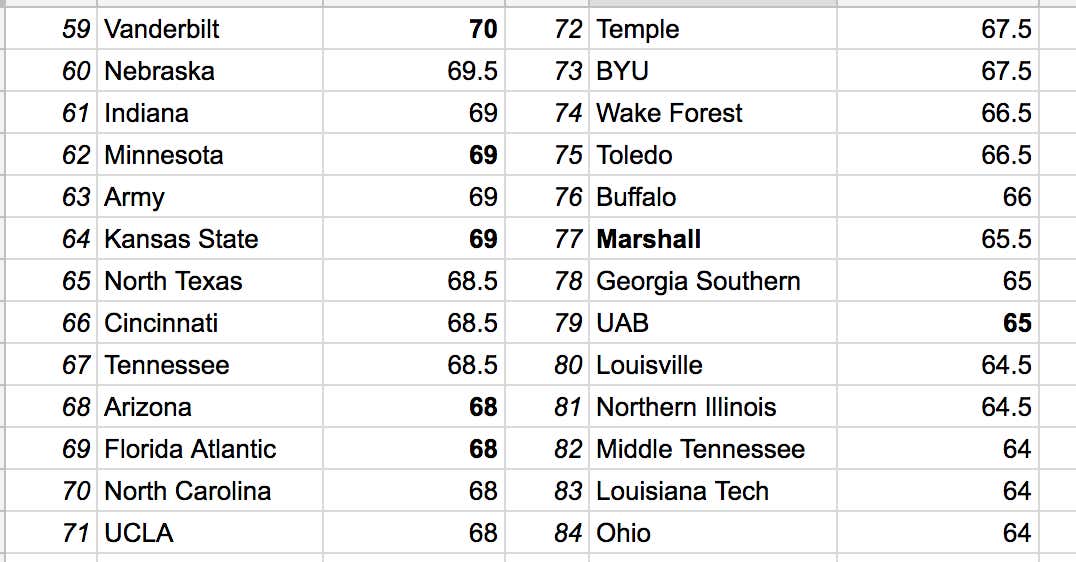 Army has flipped the service academy hierarchy on its head. It’s now Army and everybody else.

Can Cincinnati keep it up this weekend against Temple? We’ll see.

#MACtion needs to happen every week of the year.

A good win for Tennessee, but I’m not sold on them yet.

Is Nebraska the best 0-6 team ever? 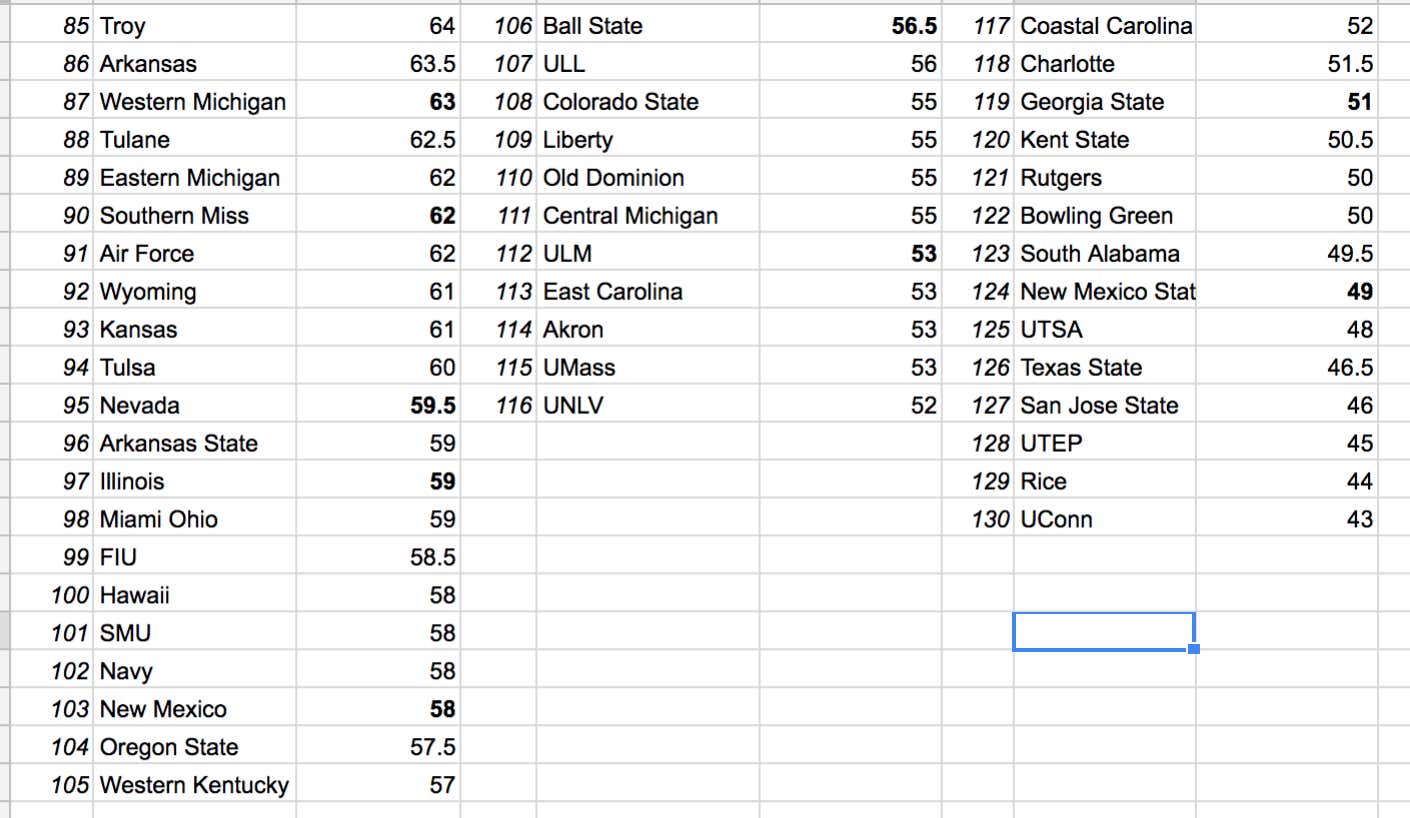 The good news for UConn? They didn’t have a chance to lose last week. This week they have South Florida. They opened as 31 point underdogs. That was immediately bet up to 34.

Rutgers is SO bad. It doesn’t even make sense how bad they are. How does such a thing happen in the birthplace of college football?!?!?