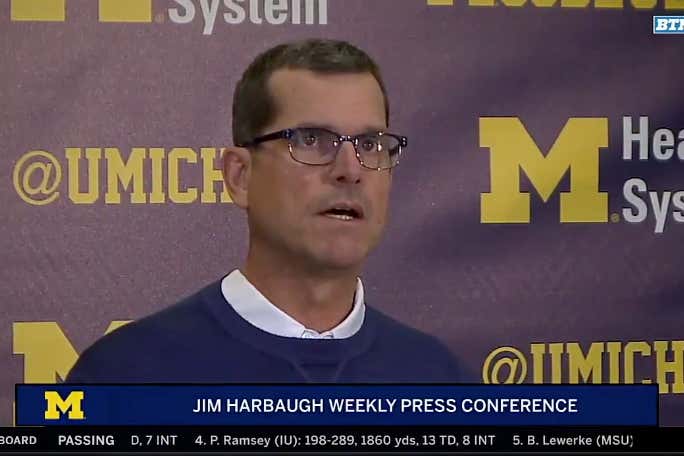 I’m sure you saw what happened this weekend before the Michigan State-Michigan game this weekend (if not, here’s a refresher). Lots of controversy! After Michigan took down their little brother (Michigan State), the battle between the two rivals went on off the field:

Today, at his weekly press conference, Jim Harbaugh doubled down:

“When you host a team, both teams, you share the field. Each has a sideline, each has a half of the field to warm up on. And then Michigan State locked arms and used every inch of the field in their walk with the attempt of going through or over our guys in a physical manner. To call that unsportsmanlike or to call that bush league is putting it mildly,” said Harbaugh, who pulled out a piece of paper with prepared words on them during his Monday press conference. “That could’ve been a real unfortunate incident. And as I said, it’s the opposite of B.S. Coach (Dantonio) said that was BS. But that’s not BS. That’s fact. I think that’s something now the two athletic directors really need to get together and talk about.

“I’ll go one step further and use Coach Dantonio’s words from a few years back. It’s not a product of the team but their program. Again, that’s using his words. That could’ve been an unfortunate deal. And I’m proud of our guys for keeping their cool.”

Goddamnit, I wish Michigan and Michigan State would play again. Cancel their November 17th games and have them play again.

Harbaugh continued on during his press conference talking about the old school Pistons:

I love when Harbaugh gets on his bullshit. It’s phenomenal.