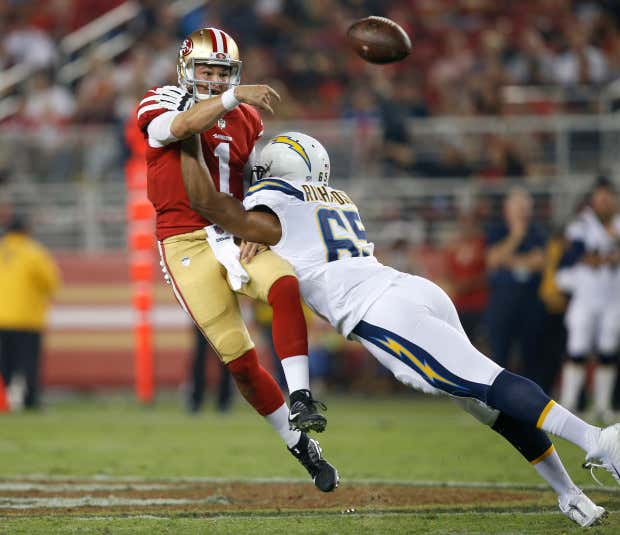 One of my favorite parts of the NFL season is when a starter goes down and a random QB from a college like Utah State trots out onto the field. It happens every now and again on Red Zone. I get the “oh, THAT average college QB is in the NFL? Interesting” feeling.

This year’s “random college QB” team of the year is the San Francisco 49ers. After Jimmy G went down, CJ Beathard, known more for his last name than his time at Iowa. Beathard has a wrist injury (sometimes the jokes write themselves, folks) and won’t be playing up. Next guy up? Nick Mullens, from the University of Southern Mississippi. Throughout his time playing for the Golden Eagles, Mullens put up almost 12,000 yards passing and 87 TD’s. His greatest achievement, though? His GRIT in December 2016:

SOURCE-The moment Hopson pointed to came when the 6-foot-1, 200-pound Mullens left the game for a couple of series late in the third quarter after injuring the thumb on his right hand.

After Mullens jogged over to the sideline favoring his right hand, Hopson wandered over to check on him.

“He had a bone sticking out through his thumb,” Hopson said with a look of disbelief. “I remember I saw the bone pop out and he said, ‘Just push the bone back in and tape it. I think I can throw the ball.’ ”

The USM medical staff followed Mullens’ request. The bone was pushed back in place and they closed the wound with stitches.

FOOOOOTBALLL GUYYYYYYY. Reminds me of Ronnie Lott losing his pinky because he played through it in a playoff game against the Giants or this sick, sick fella:

I mentioned Mullen’s impressive stats. He also brought the Golden Eagles to two bowls, but his coaches most proud moment was when Mullen told the training staff to pop his bone back into place:

“It’s the most amazing thing from a quarterback I’ve ever seen,” Hopson said. “He was throwing some balloon balls out there, but the bottom line is that’s the competitor in him. He fought through and a lot of quarterbacks would have said, ‘Hey, I’m done. I’ve got a bone through my hand. I can’t throw anymore. I’m done.’ He’s a young man who kept fighting and battling.”

Mullens starts for the 49ers tonight. Let’s hope all his bones stay in place. Not as if that will matter much.