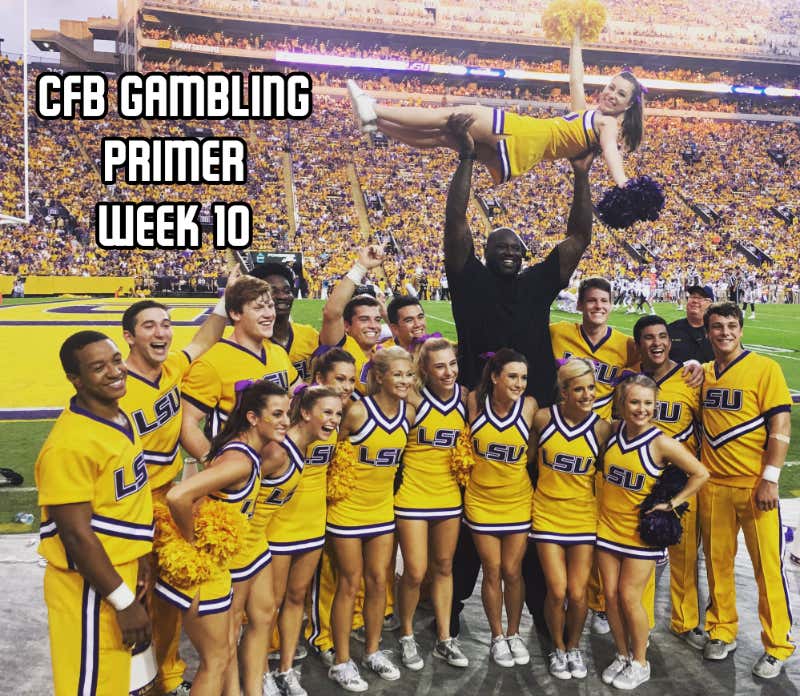 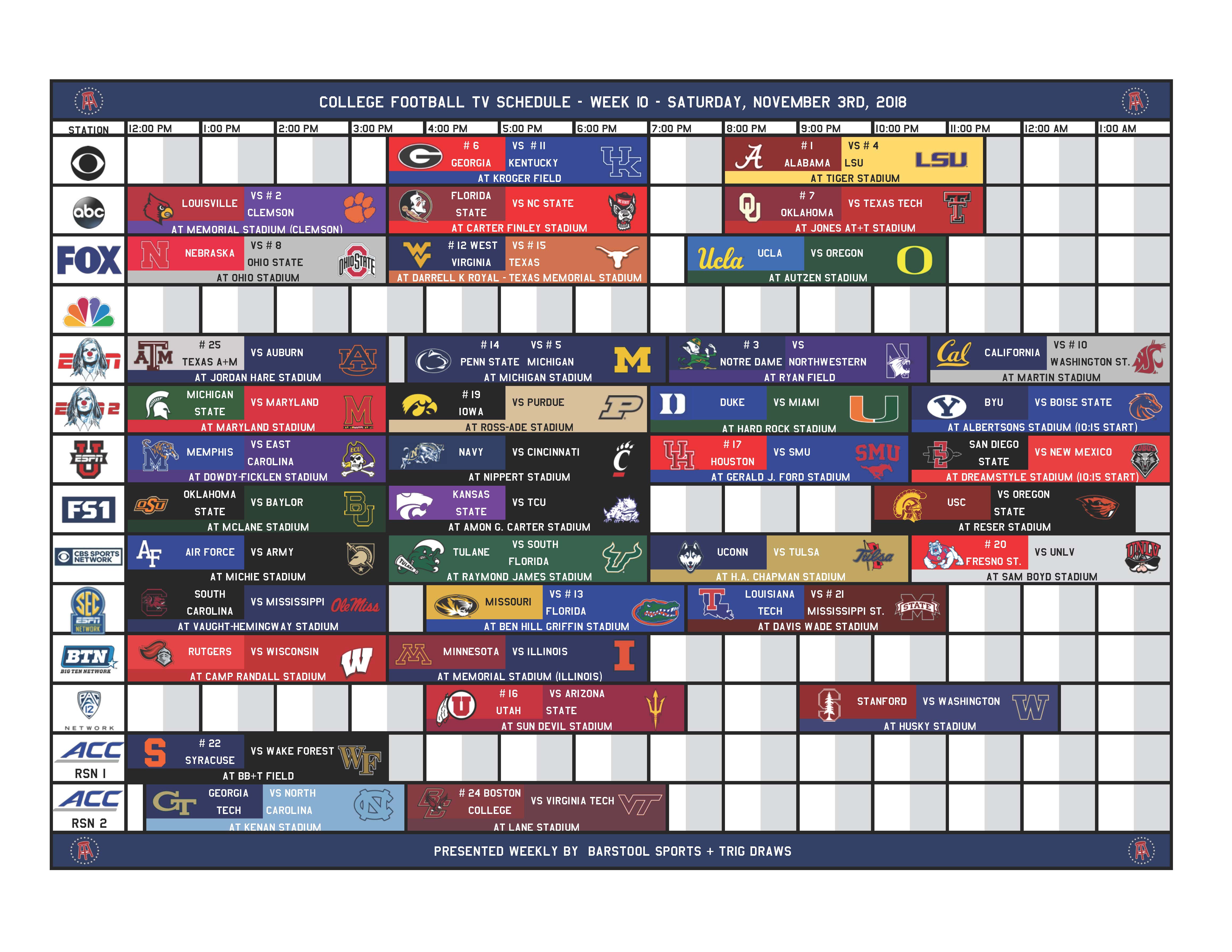 I think my body is ready for this game? I hope it is? Anyway you cut it, it’s (hopefully) going to be some fun.

I’ve gone back and forth with this game in my head. I keep coming back to Coach O and  LSU plus the points. I love the spot for the Tigers. They are about 100000x more battled tested than Alabama (6th in strength of schedule vs. 68th).  They also are at home, under the lights, in Death Valley. Plus, it’s the Giants bye week. You know what happened the last time the Giants had a bye week? NECK.

We have heard all about Alabama’s electric offense. Tua still hasn’t played in the 4th quarter of a game! However, they haven’t faced a defense like LSU, which ranks 8th overall and 3rd in passing according to S&P+. If they can escape the 1st half without too much damage allowed without Devin White on the field, they’ll be able to keep this game close. How does this Alabama team respond to being punched in the face? Will their be any issues if they go without scoring on 3 straight drives? This team has faced zero adversity.

The problem for LSU will, yet again, be their offense. I don’t trust Joe Burrow against this Alabama defense to put up 35+ points, but I do feel relatively safe in him protecting the ball. If he can do that, I think LSU can keep this game within 2 scores.

This is a play on a situation, LSU’s defense and their special teams (3rd vs. Alabama’s 92nd). Who would you rather have with the game on the line? An Alabama kicker or the pride of Worcester, Cole Tracy?

I will admit this quote made me nervous:

But, give me LSU plus the points.

STAY OFF THAT DAMN TWITTER MACHINE Game Of The MILLENNIUM: LSU +14.5

This one is simple. Georgia is coming off a massive and emotional rivalry win against Florida and heading on the road to play a team in (arguably) the biggest game of their program history. You don’t want to cap strictly off situations like that, but it’s a damn good starting point.

You know what strengthens the case to bet Kentucky even more? The matchup. Let’s start on defense for Kentucky. This Wildcat defense is phenomenal, ranking 3rd in S&P+. Georgia loves running the ball (49th in adjusted run rate), Kentucky loves stopping it (9th in rushing S&P+)! Georgia has a top 5 passing offense? Kentucky has a top 10 pass defense. They’ll be able to stop Georgia enough on defense to keep them in this game. Plus, Kentucky ranks 23rd in adjusted sack rate. Georgia’s offensive line in that stat? 73rd. Watch out Jake Fromm, Josh Allen is coming!

What makes me love this play even more is the rushing attack for Kentucky against a lackluster Georgia rush defense. Kentucky runs the ball the 11th most in the country, while putting up a top 50 Rushing S&P+ unit. Georgia ranks 77th in rush defense. Benny Snell will have his way. QB Terry Wilson showed signs of improvement last week as well.

Why wouldn’t you wanna bet on Mark Stoops and this team?!

Watch this video and tell me you aren’t going to bet Kentucky plus the points. I DARE YOU.

I’ve been saying it all year, but I’ll say it again: this Michigan team is LEGIT. This will be their final test before Ohio State and I see them passing it. Could Penn State keep it close? Yes, without a doubt. Although, Michigan holds matchup advantages.

Penn State’s offense isn’t as electric as it was when Joe Moorhead was in town, but still a top-25 unit. Michigan, though? The best defense in the country. Combine that with the fact that Trace McSorely is banged up and Michigan could hold Penn State to under 24 or so points. Michigan will be able to get after the QB (2nd in sack rate vs. 64th) and burst through into the backfield (9th in havoc rate vs. 41st allowed).

On offense, Penn State’s weakness is stopping the run (15th against the pass vs. 54th against run). Michigan runs the ball the 23rd most in America and does it to success (11th in America).

Michigan still has a disgusting feeling in their mouth after last years blowout loss in Happy Valley. Don Brown has gone mad thinking about it:

Don Brown (the best DC in the country IMO) has revenge on his mind.

Let’s pair the Wolverines with another team they are familiar with.

We can discuss Notre Dame being a better team than Northwestern. We can discuss the matchup advantages Notre Dame holds (will shut down Northwestern pass). The bigger play here is who cares about this game more? Is it Notre Dame, who knows they have to win out to make the college football playoff? Or is it Northwestern, who has a shot to win the Big Ten West if they take down Iowa next weekend? Yes, Northwestern will be pumped up to play a potential CFP team that they compete with for eyeballs in the midwest. Yes, Northwestern is a team full of players bitter they weren’t recruited by Notre Dame. I still think their mind will be elsewhere if they are down 10 or so in the 3rd quarter.

Northwestern hasn’t been blowing out teams on their way to a 5-3 record. This is the same team that lost to Akron earlier in the year. Their second order win total (second-order wins compare the advanced statistical components of a given game, and the single-game win expectancy they create, to the actual results of the game.) is 3.8, which is 1.2 wins lower than the total they have. There are only a handful of teams with a 1.0+ differential at this point in the season (Texas, Army, Northern Illinois, FIU, Coastal Carolina, just to name a few).

Maryland is a mess right now. A mess, I tell ya! I hate to take advantage of a mess stemming from a players death, but I’ve sinned before and will sin again.

The only time we see Maryland win games is when they can run the ball.

This week, they face the 2nd ranked rush defense in the country according to S&P+.

The team is in disarray. There are players fighting  each other in the locker room over the DJ Durkin situation. People are using the word whistleblower!

Totally Not Taking Advantage Of What Happened At Maryland Game Of The Year: Michigan State -2.5

Here we are. Again. In a situation that seems to be good to be true. Drew Lock against a top-40 defense getting way too little points. Here is a refresher of the stat I have mentioned twice this year. Drew Lock in his past 9 games against top-40 defenses:

Florida’s defense currently ranks 26th in S&P+. Their pass defense ranks 27th. That’s all I need to hear for this bet.

Missouri is dead after last week. Imagining bouncing back after how that game ended? Now you have to play a pissed off team in The Swamp while you sit 0-4 in the SEC? Give me the Gators.

Drew Lock Against A Top-40 Defense Play Of The Week: Florida -6

This is a BRUTAL sandwich spot for Mississippi State. They had LSU and Texas A&M in back-to-back weeks. Who do they have up next? Alabama. Think this team cares about this game much?

Louisiana Tech doesn’t back down to SEC teams. Earlier in the year they put up a fight against LSU and covered. In their past 10 games against SEC opponents, they are 8-2 ATS. This is a team full of players that have something to prove after not getting recruited by SEC squads.

Both these teams play a slow game (110th and 88th in adjusted pace), so the clock will be running. That favors the underdog. MSU star RB Kylin Hill is questionable after missing last week. I’d be shocked if he played considering who they have on deck.

Give me Louisiana Tech plus the points.

Until the day I die, I will bet the under when Military Academies play each other.

Listen to this stat: since 2005, unders are 31-8-1 (79.5%). There’s substance to that stat. Multiple double-digit play drives with the clock running thanks to every play being a FB dive up the middle. I respect triple-option unders as much as I respect the troops.

Army has been putting up decent point totals all year, but that is thanks to teams not knowing how to defend the triple-option. Air Force knows how to do that, ranking 18th in rushing S&P+ and 10th in stopping explosive run plays. Army leaves a little bit to be desired in stopping the run (93rd in rushing S&P+), but do not allow explosive run plays (29th in rushing explosiveness allowed). I, also, like Air Force in this game plus the points. I wouldn’t be surprised if Air Force pulls off the upset. Army is going to struggle stopping the run. The Black Knights rank 115th in line yards allowed, Air Force ranks 2nd in that stat on offense. Plus, Army has the 4th worst special teams unit in America, compared to Air Force’s 59th ranked unit.

Military Academy Under Of The Month: Army/Air Force Under 42.5 & Air Force +7

Utah State is very similar to Fresno State last week. They love throwing the ball (18th most in country) and are very good at it (39th in passing S&P+). Hawaii STINKS at defending against the pass (3rd last according to S&P+). When Utah State drops back, they are going to find open receivers everywhere.

The key to betting against Hawaii is can the team you are looking to wager against stop the pass? Hawaii has a top-50 pass offense and passes the ball the 5th most in the country. The answer for Utah State? Yes x 100000000. They rank 29th in stopping the pass according to S&P+ and can get after the QB (28th in adjusted sack rate). They rank 21st in causing havoc and 22nd in expected turnover margin. Hawaii in those stats? 114th and 86th.

I’d be shocked if this game crossed your radar. I don’t blame you. Why care about a game between 3-6 Wyoming against 1-7 San Jose State? Take a look at the weather report on this bad boy:

22 MPH wind? Snow? 39 degrees? For a game between the 120th ranked and 115th ranked offenses? The under is at 39? Alright, this one is going to take some balls, but scared money has never made money!

The one thing Wyoming does relatively well is run the ball (7oth in rushing S&P+). What is San Jose State’s best trait on defense? Stopping the run.

This is going to be a defensive battle. Expect Craig Bohl’s face to be red as hell.

Wind Game Of The Year: San Jose State/Wyoming Under 39 (bet this when you can. Check weather 1 hour before game. If the forecast has changed dramatically, take the over)