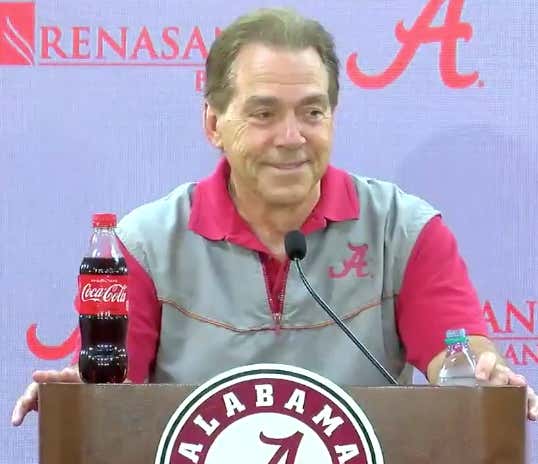 Nick Saban typically has his best press conference performances not during the week leading up to a game against LSU or Auburn, but before the likes of Arkansas State and Louisiana-Lafayette. This week, Alabama takes on FCS Citadel and Nick Saban hit peak form in his press conference yesterday:

Some of the highlights:

-“Well, if we don’t play Tua in this game, we are sending a message to every good player that they shouldn’t play in this game. So, eventually, why should we even play? Why not forfeit, so nobody gets hurt. Take a loss and just be done with it.” Yes, Nick Saban is suggesting he should forfeit against a team he is 51-point favorites against.

-“I don’t know of any outside noise. I don’t have the internet. I don’t read the paper.”

I always feel bad for the Alabama players when they have an “easy” opponent coming up. The practices the week before games against FCS and Sun Belt teams must be HELL. If you don’t drink water the right way a coach is going to be in your ear yelling “WHAT? YOU THINK THIS WEEK IS GOIN BE EASY!?? GIVE ME 5 300’S AND 20 UPDOWNS”

P.s. If you ever want to hear Nick Saban rant, just mention the 2011 Georgia Southern game. Some refer to SEC-FCS week as “Shit Through A Tin Horn” Week: