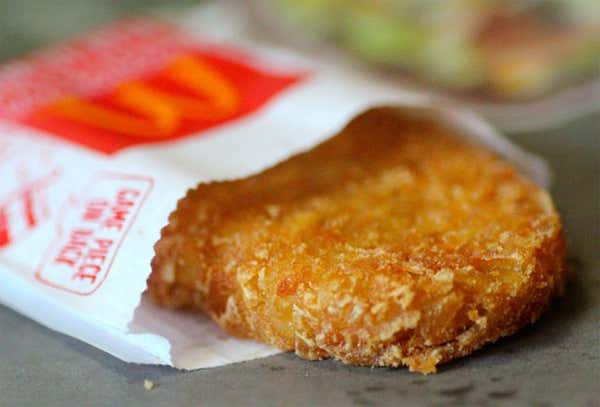 WESTPORT, Conn. (AP) — A Connecticut man who says he was wrongly cited for distracted driving after police mistook a McDonald’s hash brown for a cellphone is continuing his legal fight.

The Hour reports that Westport police gave Jason Stiber a $300 distracted driving ticket in April. The Westport man challenged the charge and lost in court.

He was granted a retrial that’s scheduled to start Dec. 7.

This is what it’s all about. Some say the criminal justice process is broken, I beg to differ. Jason Stiber has the chance to avenge himself for what is right. Do I know if he was on his phone or eating a hash brown? No idea, that’s up for the courts to decide.

Would expect nothing less. What the founder fathers envisioned.

“I was eating a hash brown and he thought he saw a cellphone near my mouth,” Stiber said, noting he told Cpl. Wong he was not on his cellphone but was given a $300 distracted driving ticket regardless.

What is the consensus on McDonald hash browns? Now that I think about it, I don’t know if people love or hate Micky D hash browns. I’m in on them. It’s not a food I could eat every day, but once in a while? I have no issue downing a McDonald’s hash brown.

Speaking of Micky D breakfast, today, Mantis had himself an entire McDonald’s breakfast meal. Ambitious to bring that into the office, but he offered me the biscuit. I had never had a McDonald’s biscuit, didn’t even know they made them. Gotta tell ya: not that great. Maybe I’ve been spoiled by Chick-fil-A & Popeye’s biscuits, but the McDonald’s one could be better.