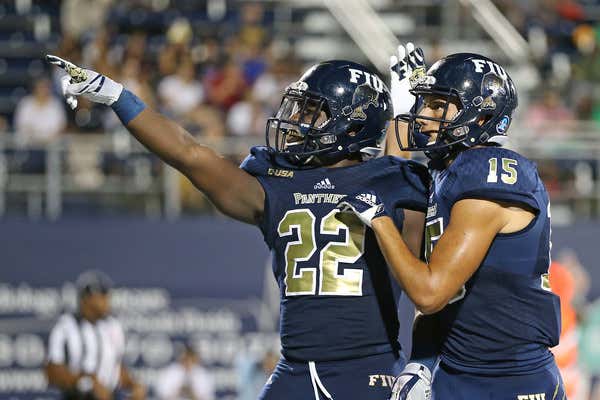 SOURCE- FIU running back Shawndarrius Phillips was arrested on Wednesday and charged with domestic battery, more than three months after a warrant was issued in Broward County, court records show. Phillips was booked by police and held on $6,000 bond.

You may be shocked by this systematic failure. How could a school let a kid play for their football team while having a warrant out for his arrest? At some point, you’ll remember FIU’s head coach is Butch Davis, the same guy who was the head coach at North Carolina when players had a full schedule of fake classes to attend every day. You’ll then have a very simple “aha!” moment.

A warrant for Phillips’ arrest was issued on Aug. 24. That means Phillips played in 11 games for the Panthers this season as a wanted man. He tallied 393 yards and four touchdowns as the team’s third-leading rusher. FIU has told multiple outlets that it has no comment on the situation or whether the university knew of the player’s legal situation. Phillips, a junior, is still listed on the team roster. The Panthers will play Toledo in the Bahamas Bowl on Dec. 21.

I wouldn’t be shocked if the only reason this came up was because FIU was preparing to travel to the Bahamas. When you travel internationally, you obviously have to bring your passport. Before teams do so, I wouldn’t be surprised if all of the players give their passports to whoever is planning the trip and they check if there are any concerns with players who may not be able to travel internationally. I’m not entirely sure of this, but I don’t think you can travel internationally with a warrant out for your arrest. So, essentially, Shawndarrius is going to jail because of the Bahamas Bowl, formerly known as the Popeyes Bahamas Bowl.

This is my second favorite FIU police incident. The first involves Jonnu Smith, who ended up being out for the entire season because his girlfriend poured boiling water on him for not paying enough attention to him:

SOURCE-The two argued through the day over the attention Smith was paying to her and their relationship. While in Smith’s dorm room and “feeling extremely emotional and stressed,” she told police, she boiled a pot of water. Then, she walked over to Smith and poured it on him.