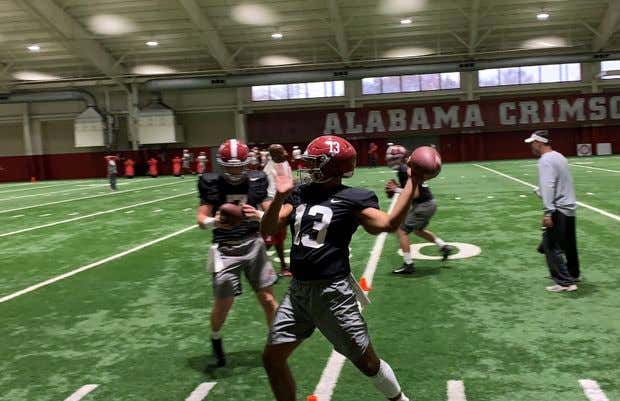 A history lesson: So there’s this guy on Alabama who hurt his ankle against Georgia in the SEC Championship game. He’s from Hawaii. Name is something like Tua Tagovailoa. He ended up getting surgery on that ankle, but Alabama told us not to worry. He should be back in 2 weeks or so. Players came out and said everybody at Alabama gets this surgery at one point in their career, so quit having your panties in a bunch.

Now that we are all on the same page, what is the latest on this player named Tua?

From a member of the Dan Patrick show:

Now, how would Dan Patrick know anything about Alabama? Who knows. Patrick has been a part of the sports media world for decades so his source is most likely solid.

Yesterday, Alabama started up practicing again. Tua was out on the field:

We are 2 weeks away from Alabama taking on Oklahoma. Those videos can be encouraging and also a bit scary for Alabama fans. In the top one, you can see Tua is certainly hobbling and nowhere close to 100%, but he is practicing and has 2 more weeks to recover. Tua is young and has the best care a college kid could get, so chances are high he’ll be closer to 100% on the 29th.

However, I’m not sold Tua is going to be the Tua we all know when Alabama takes on Oklahoma. His ankle sprain occurred on the 1st, so he’ll have 4 full weeks to recover. Will he? Yes, but Tua’s game does rely on his mobility. The good news is the high ankle sprain is not on the leg that he plants on while he throws. Mechanics with a QB are tricky, but from what I have read, if you have a high ankle sprain, it’s better to have it not on your plant foot.

I know the game isn’t for another 2 weeks, but it feels like Tua’s ankle is being forgotten about? Alabama is the favorite with Jalen or Tua in the backfield, but if I’m Oklahoma, I feel a lot better going up against Jalen Hurts.