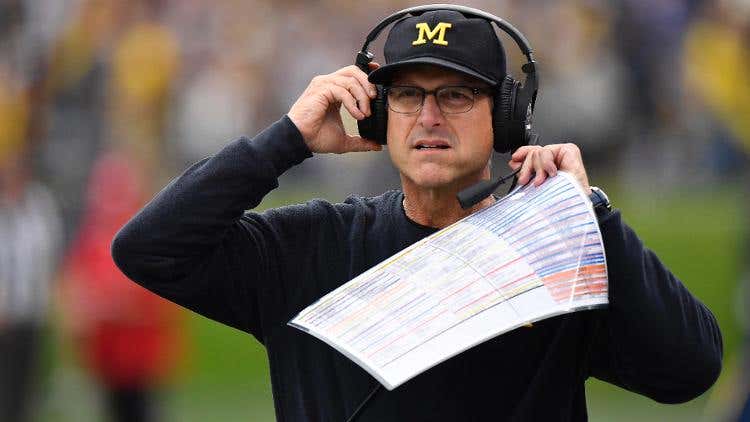 It’s that time of the year. Sleigh bells are ringing, NFL teams are disappointing, and one of them has reportedly expressed interest in Jim Harbaugh. This time it’s the New York Jets:

SOURCE-Michigan coach Jim Harbaugh has said he’s staying put. That won’t keep at least one NFL team from trying to lure him back.

Per a league source, the Jets are the team that is planning to make a run at Harbaugh after the season ends.

The thinking is that the Jets plan to make Harbaugh a financial offer he can’t refuse, well in excess of the $7 million he earns at Ann Arbor.

The Jets started digging on Harbaugh roughly four weeks ago, and the plan remains to attempt to interview him, which presumes that coach Todd Bowles will be fired after the season.

Todd Bowles is a dead man walking in New York. The Jets expressing interest in Harbaugh isn’t shocking but I don’t see Harbaugh leaving any time soon. This seems to happen every single year. If he didn’t leave to go coach Andrew Luck, I don’t think he’s going to leave for the Jets.

Harbaugh currently has the 8th ranked recruiting class and will be bringing back Shea Patterson at QB. The future is bright at Michigan. He’s established and getting paid very well.

The Jets have denied the report:

Harbaugh would look good in Jet green with LuLu Lemon khakis with a dip in his mouth. Would also be easy to sell a lot of shirts. Wouldn’t be the end of the world if he leaves Michigan for them.