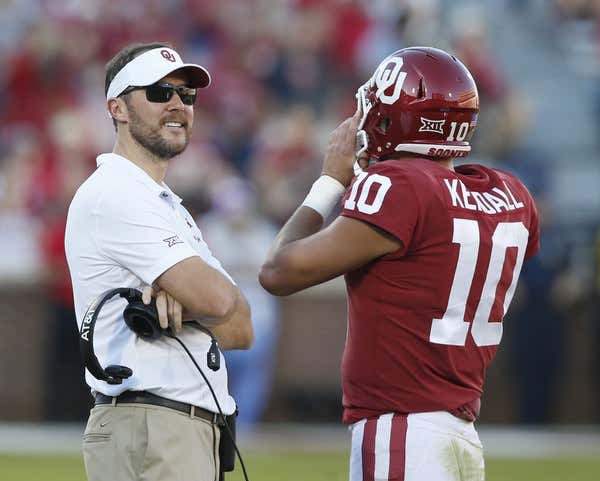 I love college football. 90%+ of the blogs I write are either funny or interesting, but unfortunately, most of the sport we all love is built on bullshit. This is one of those stories.

Earlier this month, it was announced that Oklahoma QB Austin Kendall would be transferring. Some believed this pointed towards Kyler Murray returning (didn’t happen), but instead turned into Oklahoma turning towards the transfer market for their next QB (or start true freshman QB Spencer Rattler). Austin Kendall, a former 4-star QB, is talented and could be 2019’s Joe Burrow.

One of the teams that is also looking for a QB is West Virginia. With  Tathan Martell going to Miami, West Virginia has moved on to Austin Kendall. However, Lincoln Riley is reportedly blocking West Virginia from letting this happen:

Under new transfer rules, Kendall is able to talk to West Virginia coaches and is free to transfer there. Oklahoma, however, still reserves the right under NCAA rules to keep Kendall from becoming immediately eligible at West Virginia, another Big 12 school, for the 2019 season, even though Kendall has earned his undergraduate degree at Oklahoma. Kendall could still transfer to West Virginia, but he would have to sit out the upcoming season, leaving him with only one year of eligibility left.

Bullllllllllllshiitttttttttt. The transfer portal has been a move in the right direction for the NCAA, but this shows how absurd it can be to be a player looking for a new home.

Let’s use a real world example for this: Your boss lets you know that he is moving in a different direction at your position. That’s fine and you let him know that you will be looking for other places to find employment. As your boss is recruiting other employees to replace you, he is informed that you find a new suitor, who happens to be a direct competitor. Your boss then blocks you from getting a job there for a year, because there is a governing body that allows you to do that. You then respond, “I thought this was America?” Ha, that’s what you thought!

A bad look for Oklahoma and Lincoln Riley if this proves to be true. Time for a change.