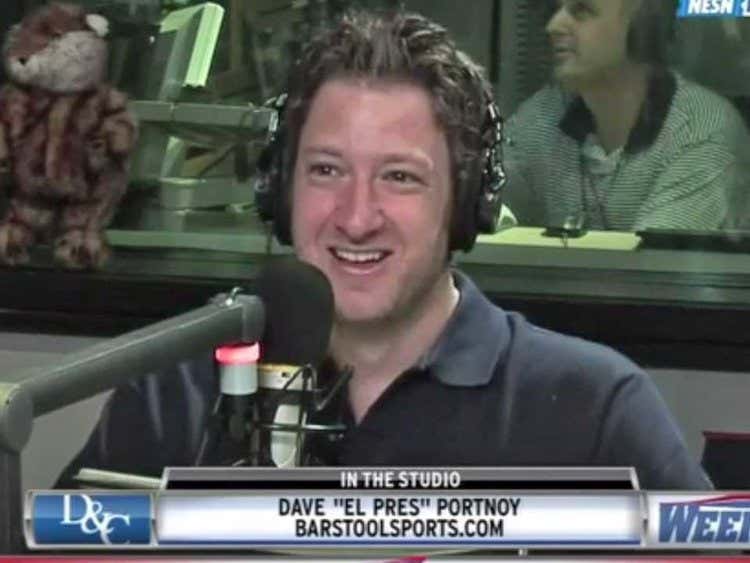 I watched the Barstool Gold Part 2 Doc this week, and the talk around the world is the ending. I was told I would be extremely choked up watching it and I was. For those of you living on Neptune. Part 2 ended with Gaz asking his long time friend Renee Portnoy to describe Dave. Her response was :

” He is relentless, but in the best way possible. Relentlessly trying for what he believes in and relentlessly standing up for his side of things, which can go both ways but he’s relentless. His relentless dedication to building this company and building the brand is like superhero status. No one else could have done what he did. Dave’s also the most loyal guy you’ll ever meet. If you’re in Dave’s circle he would do anything, anything, anything for you. And he’s the funniest guy ever.”

It got me to thinking about the history of this company, the success, the laughs etc- but most of all that portion of the doc really struck me with one last impression because of Renee’s words. There’s El Pres and there’s Dave Portnoy, and there’s a big difference.

The big thing the squids like Deadspin, Bleacher Report and ESPN want to do is tear down Barstool based on the things that have occurred in the past. Have some of these things been low hanging fruit ? For sure. But what they don’t tell you in their countless hit pieces, or attacks is that while El Pres is the character they hate, they never bothered to know Dave Portnoy , the man.

What those morons do is try to convince everyone that because the El Pres character did something bad, or said something questionable – that Dave Portnoy must be a rotten, no good, horrible, awful person. It’s been said countless times by countless people with absolutely no merit.  Those sites don’t bother to look into the things Renee touched on , or the positive things Barstool has on it’s resume which far outweigh the negative.

The Dave Portnoy I know is everything Renee said. Additionally, he’s the guy who has raised countless money for charities at the drop of a dime. Cops, vets, wounded, sick ,etc etc. Barstool and those “awful” stoolies you read about raised huge amounts for anyone in a tough spot, all at the direction of Dave Portnoy.

I have been told by a mutual friend about the time Dave got an email about a service dog being hit and run. The dog’s bills were a huge amount. The money got raised nearly instantly via Barstool.

He’s the guy who even when he can’t make your wedding makes sure he texts you to say congrats, that he’s proud of you and to enjoy it.

He’s the guy who’s never strayed from the guys who believed in him, and worked with him when he had nothing.

He does deals on his word, and he honors them.

Any other person in America is revered regarding rags to riches stories , why not Dave Portnoy ? Why when they see one thing they disagree with do they not bother to research the 10 or 20 they do?

For me it’s pretty simple- the easiest way to sum it up is the scene in The Wolf Of Wall Street when Jordan Belfort makes a final speech planning to announce he’s quitting the company. He looks out at the people he molded, the ones he hired, built a company etc.  . He see’s a woman Kimmy and talks about how successful she is now, and everything she has to offer. Then he tells the story of how when he met her she had nothing to her name.  He finishes the story by saying how when she asked for money to pay her kids tuition he gave her up front pay 5x what she asked for because he believed in her.

That’s the real kicker for me. Jordan Belfort stared out at a room full people that even through the questionable acts, and regrets – are unquestionably devoted to him. The same can be said for El Pres. Has El Pres done some questionable things ? Sure. Are they mistakes he wishes he could take back ? Yes.

But for every jab you wanna take at El Pres, or every click bait quote you may have, there’s a line of people like Kimmy around the block with a story to tell you you’re wrong. That line of people will likely include be a person he took a chance on, a coworker, a person he mentored, a colleague, a family in a better place because of his charity, and a caller turned podcast co-host- all very grateful for the last 15 years of this roller coaster ride of a company that’s taken the world by storm.

So for those of you reading this who still have your doubts about El Pres. Watch Renee’s words, read this, then research everything you can about El Pres. If when you finish you still hate the character- that’s fine. But don’t you dare judge Dave Portnoy the same way, because he’s a guy who’s never changed, and never will.