Okay, the video above is absurd. I’d say must watch. I’m not going to put that in the headlines because I’ve been yelled at about that before, but after I watched the Atherstone Ball Game 2019 video one thing became clear: I needed to know more.

Somehow, someway, this game has been around in England since the year 1199!!!!! The crazy motherfuckers have been doing this for 820 years! The English are a different breed. They can drink more than us and don’t give a shit about pain. Think these guys care about CTE? No.

The ball game is a form of “medieval football.” It’s absolutely electric. I don’t know how I haven’t heard of this until now. Why isn’t anyone televising this? Why aren’t we doing this at Rough N’ Rowdy? Why aren’t we determining the future interns by whoever can survive this game?

WIKI-The two-hour game is played in the town’s main street, Long Street, and sees groups of players compete for possession of a giant ball that is specially made for the occasion.

Look at the blood all over that ball!! 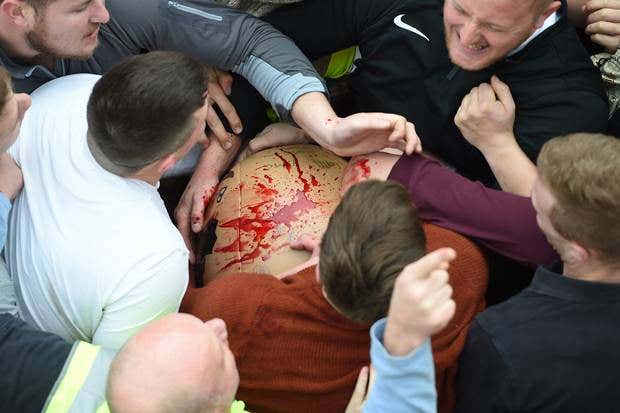 The game itself has few rules, two being that play is restricted to Long Street and participants are not allowed to kill anyone.

Again. How have we never talked about this before?

The winner is declared at 5.00pm, the title going to the person who has possession of the ball when the whistle sounds

Just 2 hours straight of unsportsmanlike conduct and targeting penalties. Roger Goodell’s worst nightmare. The NFL could learn a thing or two from this game.

I don’t know if this could happen, but we need a Rough N’ Rowdy card at the next Atherstone Ball Game. A few fights and then the medieval football game is the main event. 100k PPV buys, guaranteed.