Ultimately, the goal of 2/4-years of college is to develop students into a better version of themselves then they were when they walked onto campus. Most of such improvements happen on the intellectual level, but it’s apparent that physical health is directly correlated with increased cognition. So, the healthier you are, the better you think. With that being considered, it would make sense that colleges would encourage physical health. That’s exactly what Dickinson did: 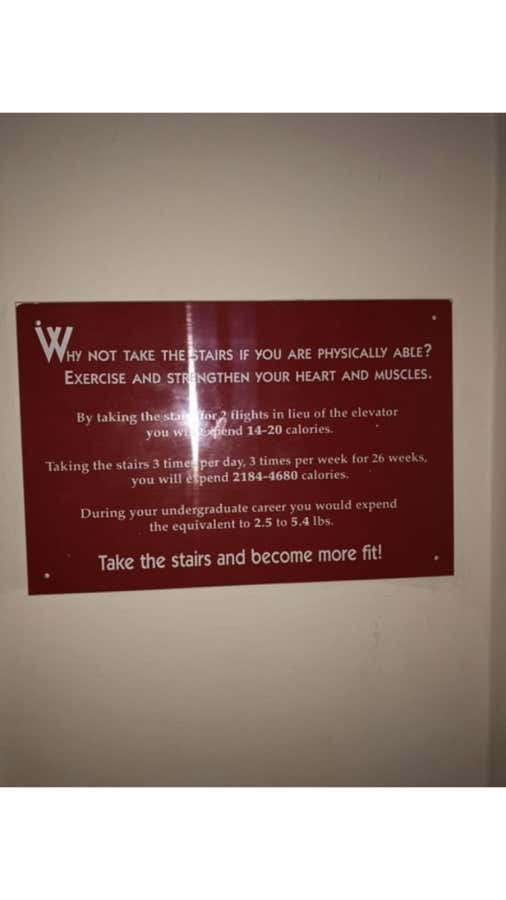 SOURCE-Signs encouraging students to “Take the stairs and become more fit” and burn calories rather than taking the elevators have recently been removed by the administration per the request of students.

Students first noticed the elevator signs in Bosler Hall which led to more investigations of other locations. The signs had calculations of how many calories a student could lose per day, per year and how many pounds they could lose after four years by choosing to use the stairs instead of elevators.

Whenever I think about taking the elevator over the stairs, I think of this tweet:

I have never seen a fat person take the stairs. There’s a lesson in that. So, I quit my complaining and ditch the elevator to take the stairs. To see it visualized like Dickinson did by showing how many lbs one can lose during their time while in college is pretty cool. However, some students didn’t feel that way:

Prabhleen Kaur ’21 first noticed the signs in Bosler when she started taking classes on the third floor and used the elevator. “I began to feel guilty every time that I took the elevator,” Kaur said. She explained that taking the stairs caused uncomfortable physical symptoms including dizziness and loss of breath. “I started realizing that I shouldn’t put my body through pain or stress when there is an elevator I could use,” she said.

This is why America is not healthy. 99% of the population has the physical ability to walk up the stairs without feeling dizzy or having a loss of breath. If that is happening to you, there is a problem. Most likely, that problem is you are out of shape. You know how we fix that? Take the stairs more, you lazy fuck.

James van Kuilenburg ’22 also noticed the signs and discussed their presence on campus with Kaur. “These signs were effectively fat shaming as they promoted weight loss as a positive thing,” van Kuilenburg said. “It had a negative impact on campus to have a series of signs that glorified a dangerous narrative that feeds into eating disorders.”

“They promoted weight loss as a positive thing,” oh we are now calling losing weight a negative thing?

To get the signs removed, van Kuilenburg and Kaur reached out to Amy Farrell, professor of American studies, and expressed his concerns. Van Kuilenburg said that, Farrell, who teaches courses in fat studies, then forwarded his thoughts to Brenda Bretz, vice president of campus inclusion.

Van Kuilenburg said that the removal of the signs was swift and “demonstrated admin’s willingness to learn about new issues and support students when they asked for help.” He continued with his hopes that the administration’s actions will help the campus move towards body positivity and “less emphasis on dangerous social body expectations.”

Taking the stairs is now bad.