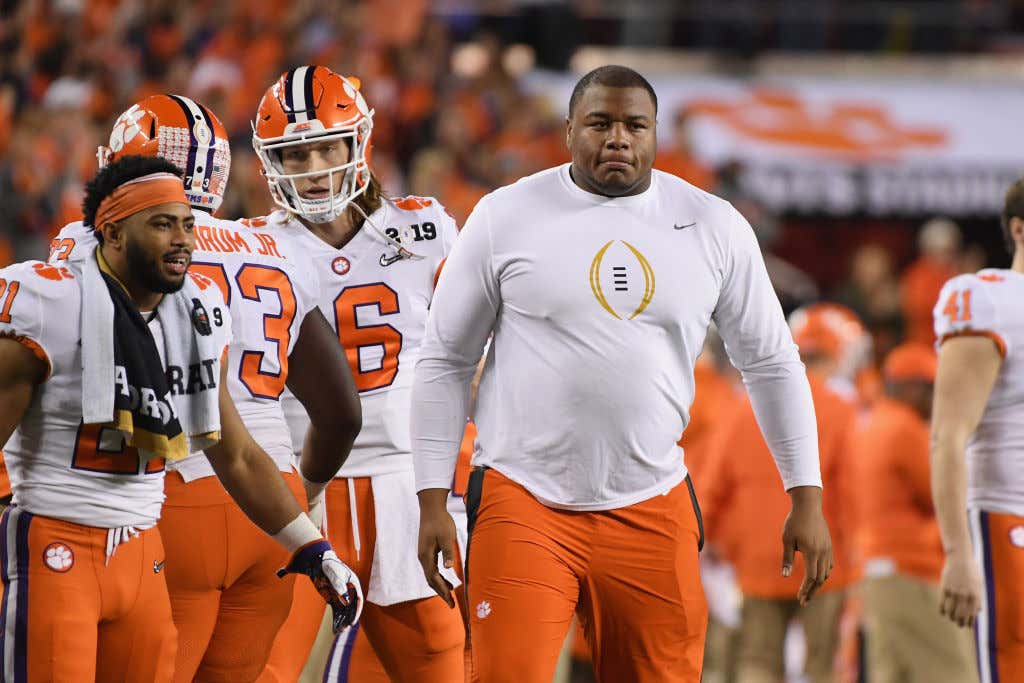 Dexter Lawrence is a name you’ll be hearing a lot more of if you are a Giants fan. The #17 pick from Clemson will be a force in the NFL for years to come. For college football fans, he’ll be remembered for his great play on the field and one of the most bizarre situations off of it.

Back before Clemson’s CFP semifinal game against Notre Dame, Dexter Lawrence was suspended for testing positive for a PED named Ostarine. For those unaware, Ostarine is a selective androgen receptor modulator (SARM). It’s essentially JV steroids. If you played sports, I’m sure you’ve heard of Ostarine as it’s quite popular, especially at the higher levels. It is a PED, so players cannot take it in any sports association.

Normally, this story would just die. Lawrence would sit out the game and we’d all forget about it, but it turns out this may be exposing a potential issue at Clemson:

SOURCE-Lawrence has said he has no idea how the PED entered his system. Clemson coach Dabo Swinney told The Post and Courier the ostarine could have been given to the players by the school itself, by mistake.

If you were wondering, yes, it is incredibly hard to give players Ostarine by mistake. I guess the supplements that are allowed to be given by the school to players could’ve been produced in the same factory as Ostarine is, which results in traces of Ostarine being in a supplement like creatine? This is known to happen because of how shady the supplement industry is, but I don’t think that’s even a fair excuse. If you are a program of Clemson’s caliber, you have to make sure stuff like that doesn’t happen.

Anyhow, the Giants taking Dexter Lawrence at #17 may have saved Clemson’s ass:

Clemson football and legal department people were happy for all three of the Tigers defensive linemen selected in the first round of the NFL draft Thursday night but probably happiest for Dexter Lawrence, who went to the New York Giants with the 17th overall pick.

Lawrence, a 6-4, 340-pound junior defensive tackle, was one of three Clemson players who tested positive for ostarine, a banned performance-enhancing drug, prior to the Cotton Bowl in December. All three were banned from the Tigers’ Cotton Bowl and national championship game victories.

Athletic director Dan Radakovich said Friday he expects an NCAA appeal result in the next few days, a ruling originally due in February before Clemson received an extension. The timing might not be coincidental: Two Clemson senior administration officials who requested anonymity told The Post and Courier that the school feared a lawsuit from Lawrence, long projected as a first-round pick, if he fell too far in the draft and if the tumble could be tied to the failed PED test.

“We think we’re in the clear now,” one of the officials said Saturday.

Let’s say Dexter Lawrence dropped all the way to round 2 and he went ahead with this lawsuit:

“I do want to know how it got in my system and where it came from,” Lawrence said. “But right now, they are still doing their research to see where exactly it came from, and they don’t know where right now.”

This could’ve led to massive consequences for Clemson. Are Dabo Swiney and Clemson football feeding their players Ostarine without their consent? I, mean, it’s not the craziest thing I’ve ever heard, but also unlikely. Dabo is a man of Christ. He would never do anything like that. Never!

What does this whole thing say about Clemson? Not much. This is what happens at the highest levels of college football. You want an edge? You find a way to get it. Do I honestly think that Clemson is running a massive operation that provides their players with Ostarine without them knowing? Probably not. It’s not like they have a “sports science” facility or anything like that:

I do think the NCAA should investigate a little bit more, but as we know, they’d much rather deal with stuff like schools paying their athletes a bit too much for textbooks: